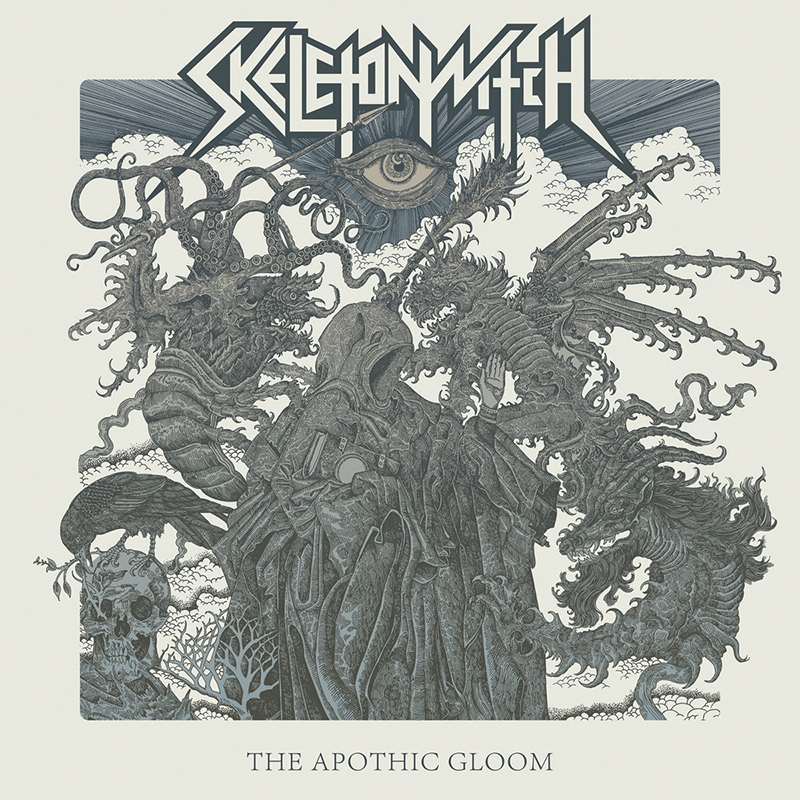 After the addition of Adam Clemens and three years since Serpents Unleashed, Skeletonwitch remain as alien and otherworldly as ever. Their vocal styling has elements of black metal, but otherwise, they are relentlessly tricky to pin down. The Apothic Gloom begins slowly, conjuring a dim grey moon in a midnight mist. The 40-second intro to the album is lamenting and melancholic, blurred as the moonlight cast thereof. When you are about to give in to apathy, the album sucks in a breath and releases a tinny electric guitar, echoing the droning you are being drowned by. The self-titled intro track is a slow trudge to the gallows, but at two minutes, the Skeletonwitch we know and love is back. To consider only this introduction and assume the album is going to be milder is a substantial misinterpretation. Once their chugging bassline begins, it refuses to concede until the fourth and final track comes to a halt. “The Apothic Gloom” implodes in one last hiss of the cymbal, but before you can gasp, the soul-sucking vacuum of the second track begins.

“Well of Despair” circulates in your eardrums like a fission engine, hellbent on the abyss. The gravity of Clemens’ existentially painful lyricism and the cymbal-thick pounding of Dustin Boltjes’ percussive deathblows deconstruct a dichotomy almost unbearable to listen to. Their essence is both deathly glacial and violently searing. A high humming, like frigid rigor mortis, undercut by inexorable anger, contradict and complement each other. The beauty of extreme metal’s disturbing aural ache is more apparent in this song than any other on the album. If you enjoy noise music and the sweet caress of agony on your eardrums, and you aren’t bothered by listening to an album out of order, flick on “Well of Despair” first. The nearly dry-heaving grunts from Clemens alone make this epic a slice of pure fatality.

“Red Death, White Light” sounds like what I imagine getting electroshock therapy would feel like. The sound of the screeching guitars alone has you seeing stars. For the second time on the album, Clemens showcases his ability to flip effortlessly between ambient, breathy growling to deep, guttural snarling. The bassline pulverizes away like a grave of grinding bones. Two-thirds of the way through this seven-minute torment, an ominous riff plays heavily in your right ear, and a syncopated thrashing chord progression comes in on your left. The album throws in no oddities at the end and instead builds to one final, perfectly befitting, awkward tone.

While The Apothic Gloom does not particularly deviate from their sound, Skeletonwitch have distanced themselves from their contemporaries so much that uniqueness comes naturally. It is a short, four-song EP, but it remains dense and powerful, as if they had released a packed full-length album. This release hit my frontal lobe just in time for winter. The death or disappearance of nearly all natural life in the city will need a painful soundtrack. The Apothic Gloom will provide just that. –LeAundra Jeffs