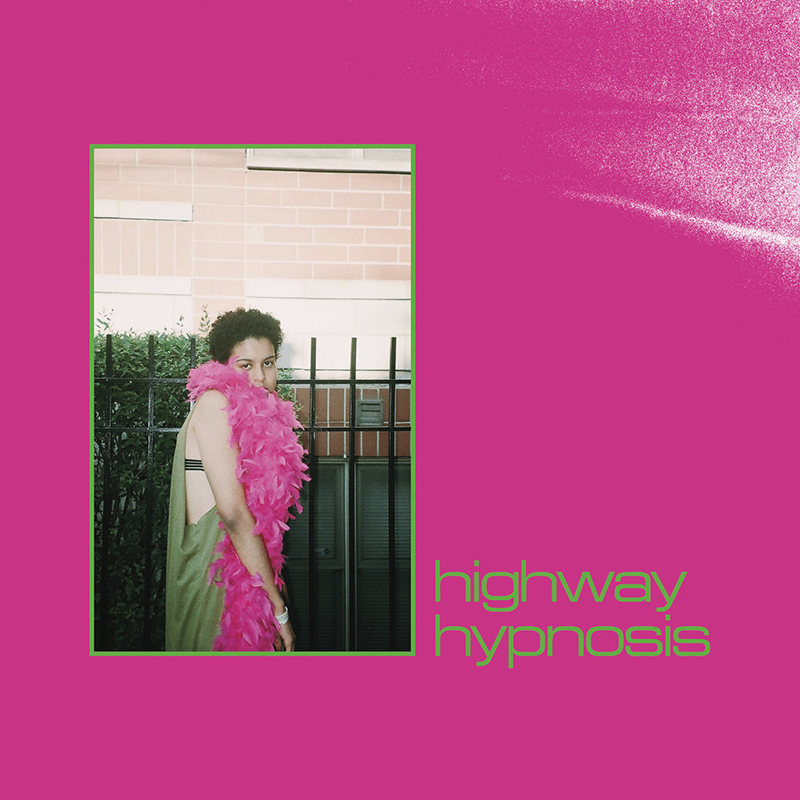 On Eva Moolchan’s prior release, It’s a Myth, most of the songs were straightforward and fairly minimal, whereas Highway Hypnosis has gone to town layering all her staple sounds to create a much more complicated soundscape, while also honing in on a more generally upbeat vibe. In an interview with Paper Magazine, she stated that this album would be a marked departure from her old material. The title-track opens the album, a trippy track filled with Moolchan’s chanting of the phrase, while warm and drippy beats pool in the background. The song also shows evidence of that progress that Moolchan mentions—with an opener like this in front of an experimentally fresh album, it’s easy to see that Moolchan is focused on forward motion.

“Highway Hypnosis” is followed by the equally strong “The Way it Goes,” which goes all over the place sonically as Moolchan slickly raps and drolly talk-sings over a fast-then-slow, build-then-fall spread of sporty beats. The song is one of the album’s stand-outs, with Moolchan swooping around the listener, tripping us up at every turn. “Suck It Like a Whistle” is the same kind of song, brimming with the a charming kind of cockiness. Bass circles like a drone, too close, right up in your face as Moolchan again schmoozes her way among the beats and a snappy synth that sounds like a sample of a fizzy bottle of pop cracking open. Each song features extremely tight production, taking the listener on a willing ride—one that’s straightforward and premeditated, but always with an undertow of action. The album often hums with the sleek energy of the new millenium, recalling early-aughts aesthetics at many turns, whether by way of Malchoon’s loaded basslines or her sultry, early Peaches-esque beats and delivery.

Moolchan’s often multiplicitous voices surround the listener. One voice talk-sings lazily, matter-of-factly, while other voices are manipulated into higher and lower pitches that circle your ears like playful sprites or brawny shoulder devils.  Moolchan also weaves in and out of forms, going from clipped songs made up of only spare, fast beats (“Hong Kong to Amsterdam”), to dreamy, hip-hop resonate tracks, all the way to moody, stripped post-punk meditations like “And We’re Off.” On “Holy Cow I Never Saw a Girl Like Her,” she spits that phrase over and over, almost to herself, while a bass pulses along raggedly, mimicking a desperate heart-rate and bringing to mind the grunginess of the youthful Bikini Kill. “Cinnamon” and “Ecstasy” are two more down-tempo songs whose borderline-melancholic energy reminds me of certain songs by Swan Lingo, if only because of how easily Moolchan’s voice can swing low into the sound of casual lethargy.

Highway Hypnosis is rich with samples of what Moolchan can do (and will do) and is definitely her strongest album yet. There’s dynamism in each song that makes me pay attention to where she’s taking me next. Most admirable is her refusal to pay more attention to any genre over another in her music, privileging her punkish bass just as much as her electro-pop synths. She rotates unabashedly between the two, showing two sides of one shiny, shiny coin. Watch out for Sneaks in the future, because she’s only going up from here. –Erin Moore