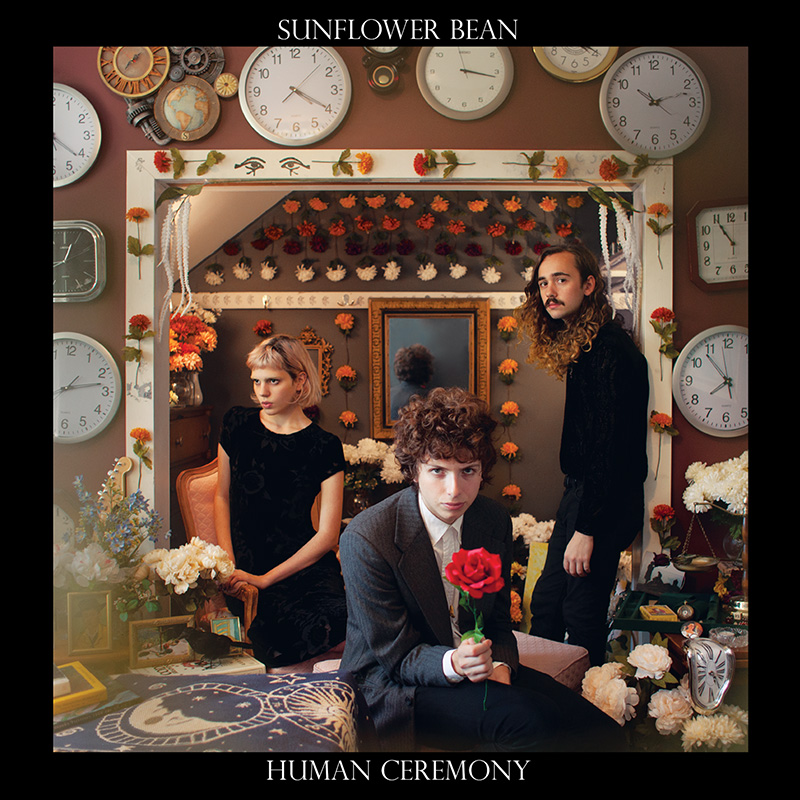 Brooklyn-based Sunflower Bean are a dynamic trio who’ve made lightning-fast progress as a band to watch, pairing their fast-paced and energetic psych rock with equally paced, widespread tours. While their first release, the EP Show Me Your Seven Secrets, is a heavy drifter, loud and wild, their debut album, Human Ceremony, is a clean-faced, intricately pieced-together contribution to that strange creature of contemporary psych rock.

Sunflower Bean have a gloomy, compelling energy underneath all that shimmering reverb, which actually makes it feel like some lovely offspring of shoegaze and psych rock. That seems like an obviously awesome combination, but I can’t think of many notable examples, which makes the sound of this album stand out all the more. Sunflower Bean’s style is really exciting, and I think it could appeal to a lot of different listeners. Coming out of a mecca of music, it might be easy to pigeonhole them as indie wunderkinds, but their music is dynamic. Dreamy, shimmery jangles jumble up with rough garage rock on many of the songs, so there’s something new to notice with every new listen. The album contains a slightly different version of their EP’s “2013,” and it exemplifies their tendency to catch a listener off-guard with its hazy, repeated-back lyrics, sounding like some echoed spell. The song plays at a harried pace—it’s maybe the fastest song on the album, but it doesn’t overwhelm.

Sunflower Bean’s music feels all-out and urgent in some way or another. All three members of the band are under 21, and for anyone who’s ever been at the end of adolescence and at the mouth of the 20-something cave, their music makes perfect sense. The poetic lyrics and fine, crystal voice of bassist Julia Cumming sprawl on top of a hodgepodge of sweet-spirited psychedelics and rippling, ever-changing melodies that change pace at breakneck speed. The album feels like a picture of something unsteady, like one of those well-timed photos of a building in mid-collapse. They are capturing certain ideas and feelings and throwing everything into expressing them. They manage to make a song about staying home (“I Was Home”) sound something like a riot, and then to contrast that, “Creation Myth” comes on, the dreamy pinnacle of the whole thing, where Cumming’s voice swoops in a heavenly way that sticks in your head.

What’s most impressive about Sunflower Bean is that their EP and this album are both really fantastic pieces produced in a very short amount of time. Their music is just a concentration of goodness: It’s dense with thoughtfulness, but doesn’t feel bogged down or pretentious. It feels natural and playful, especially with tracks like their single, “Easier Said.” There is a youthful energy powering every straightforward drum beat and every meandering crash of guitars.

Human Ceremony doesn’t fit in—or blend in—with psych rock because it doesn’t follow any cookie-cutter patterns. It’s aimless and confusing at times, heavy and grungy at others, but there are no tired themes or sounds here. They remind me of a lot of different things all at once, in a way I haven’t been able to pin down. The many colors they show off in this album make me feel like their next one is going to be just as interesting. If you haven’t listened to Sunflower Bean yet, listen to this album. Their music, as of now, is youthful rock music, and I think it’s only going to get cooler from here on out.