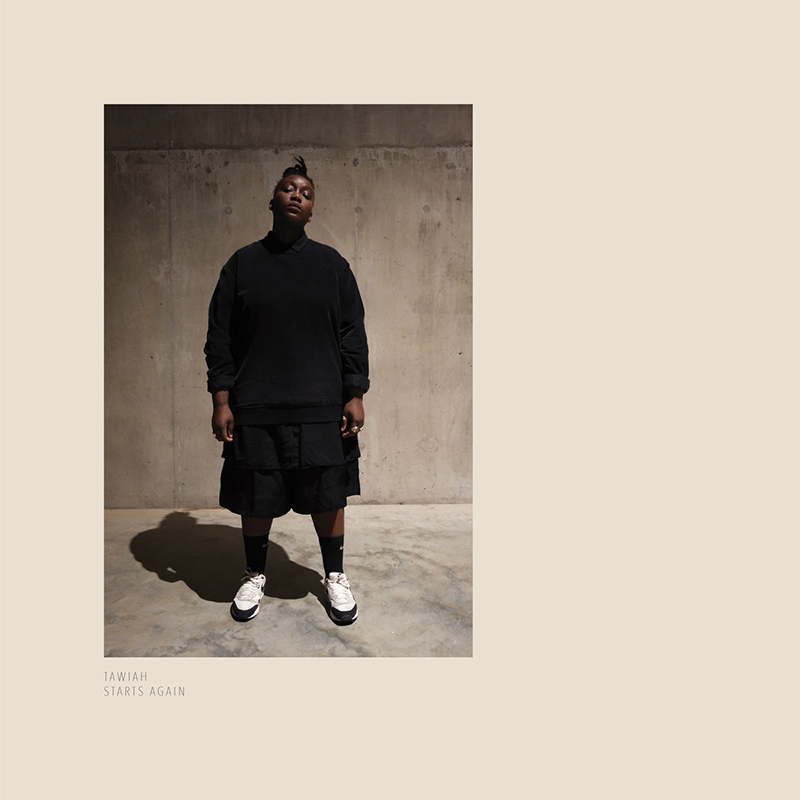 As the latest signing to First Word Records, and just coming off supporting Moses Sumney on his most recent EU tour, it is finally time for the debut album of the long-established alt-soul artist Tawiah. After already making waves in the soul and R&B scenes, Tawiah brings a mix of fun, upbeat funk and smooth somber sounds on Starts Again.

After opening with some jazz on the radio and a conversation, Starts Again continues with “Recreate,” a track that is carried by a head-bobbing beat and hypnotic string play. I immediately replayed this song after it finished, as the vibe it puts out is something that shouldn’t ever end. As “Recreate” fades out, “Good” kicks off with some simple synth riffing. Soon, a drum machine kicks up, setting the stage for the vocals calling to be good enough to wash in: “I just don’t wanna be good / I just wanna be for you.” Tawiah also introduces live percussion. This song brings up feelings of wanting to prove your self-worth. It’s presented in a beautifully smooth package with a subtle yet complex bassline toward the end of the track.

“Borders” changes up the mood with a kicked back, more positive feeling—its acoustic strumming and chorus vocals bring up a sound that feels plucked out of the early ’90s. The album really starts to slow it down with its later songs, beginning with “Don’t Hold Your Breath,” a vocally driven track backed by a drum machine beat and orchestral elements. These sounds bring an organic feeling bit of life to the song. The bass and the DIY feel from the drum machine give off an early-The Internet vibe to this song, cementing it as one of the best on the album as it closes out Starts Again’s first half.

Starts Again continues with chatter and city sounds, grounding this album and adding to its down-to-earth sound, as the plucking of a guitar can be heard amongst the bustle. “One Moment” opens with a cool, distorted guitar riff. This allows duetting vocals to roll in over the continued city sounds, giving the track a street-performance feeling. The track “Lost In A Dream” also deserves some recognition with its infectious and distant muted line. Paired with some light percussion, it helps highlight some of Tawiah’s best vocal delivery on the entire album.

Starts Again is a fantastic debut—it plays around a lot without seeming lost; it’s funky as hell, and Tawiah sounds like a dream. Starts Again puts out a very deep and comforting feeling with its vintage-sounding beats, lively percussion, orchestral hints and caring lyrics. Something about the percussion and orchestral elements used throughout feels familiar and raw. Starts Again is an album that should not be overlooked and Tawiah set the bar high with this debut. If you aren’t already keeping your eye out for that name, you better start now. –Connor Brady