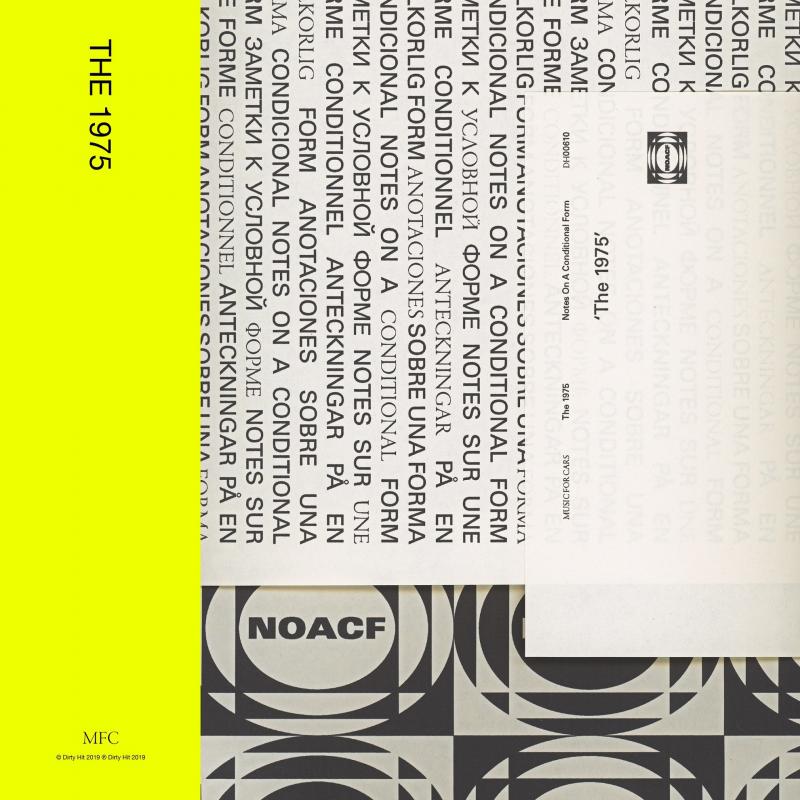 The 1975 Notes on a Conditional Form

Awaiting the fourth full-length studio album of Manchester indie-turned-super-pop band The 1975 has been a right-proper ordeal for aficionados. Established during the second half of a so-called era of the band’s evolution, the album’s creation has been rather beset by a gaggle of global crises that might have fortuitously set it up to be especially apropos for its epoch. The first single, "People," dropped in late August of 2019 in the depths of a dying summer of political rancor & acres of burning Amazon forest, all things that seem like mere silhouettes of catastrophe some nine months later.

That first released track brought back the trashy punk roots the band came from under their early 2010s teenage moniker, Drive Like I Do. The song once again felt like an unusual initial offering similar to their 3rd album’s opening single, "Give Yourself A Try." Yet People is all too apt for the then-building chaos of the globe at the time of its release. As is usual with all their albums, Notes on a Conditional Form opens with a self-titled track, this time featuring an eco-consciousness treatise penned and voiced by young prodigy/activist Greta Thunberg. Compared to their three prior LPs, this intro is a more mature, evolved iteration of the British foursome’s usual modus operandi.

Known preemptively as Notes and NOACF, this new album is a head-swirling 22 tracks of eclectic everything from experimental sounds, soaring orchestral arrangements, ambient, punk, vaporwave, shoegaze, acoustic, pop and R&B. The 1975 are now known for being a mixed bag of sometimes madness, yet taken in entirety, their albums can be rather magnetic, magnum opus’ of sorts bolstered by the grandiosity, boldness and bombasticism now expected from this brash band. Case-in-point, the numerous orchestral punctuations between and within more market-friendly tracks highly influenced by Brian Eno’s Music for Airports, as obvious in the "Music For Cars" moniker for the era of these last two albums, also a call-back to one of their more brilliant early EP’s.

Notes feels more zeitgeisty than even The 1975 could have predicted when they first began brain dumping the album many months ago. The state of the world now seems to be manifesting many of the themes confronted on the album on far more massive levels. At the time of it’s studio inception, sociopolitical and ecological calamities were already accruing. Now the album meets the ears of the audience in a bewildering exacerbation of the mess of a global pandemic with mounting deaths, economic strife and increasing political divisiveness. The LP itself seemed fraught at first, especially after a handful of release date adjustments and the utter stall of their rabid touring methodology in what’s essentially the collapse of the music industry as a result of COVID-19.

Tracks such as “If You’re Too Shy” return to the band's shiny pop roots and show that they've held steady to  their core stylistic traits, including studio and touring bandmate John Waugh’s usual '80s-sax-blast-from-the-past and the melange of mixing & mastering of producer/drummer George Daniel. The 1975 also trends toward the same subtle faults of their sonic persona in this album including their quite on-brand ourobouros of self-referencing and reflections of their bombastic yet brilliant frontman and lyricist, Matthew Healy. Healy’s pomposity and feather fluffing often serves the band’s style and flare, and at times—especially via a nearly two-dozen track LP—can inspire psychic fatigue and more than a few eyerolls. Similar to their last album, Notes on a Conditional Form is also a bit needlessly heavy handed with the vocoder, an unusual choice considering Healy’s decent natural vocal skills.

Also consistent to The 1975's process is the conclusion of their albums. Notes finishes its sonic marathon with some straight up neuron snaggers like "What Should I Say." Their always softly sweet, genuinely heartfelt concluding tracks are also a stylistic throughline from their prior studio albums. This time, this occurs via "Don’t Worry" and the most recently released single, "Guys," which dropped just a day before the album. Said closing track is a salient retrospective through song at a time when we are probably all missing our tribes on very different levels than one imagines were intended in the song's original narrative.

Notes on a Conditional Form may not be one the level of the heartrending, mind-stirring sonic masterpieces of their first two albums, but it’s a solid and competent work of musical creation and consciousness. It remains yet unknown what further crises await our world, and also when The 1975 may be able to tour this curious and creative collective in light of social distancing and silent concert venues. Regardless, The 1975 have once more given us something rather serious to contemplate, wrapped in some playfulness, wit, charm and angst that befits an equally tempestuous era in history. –Paige Zuckerman