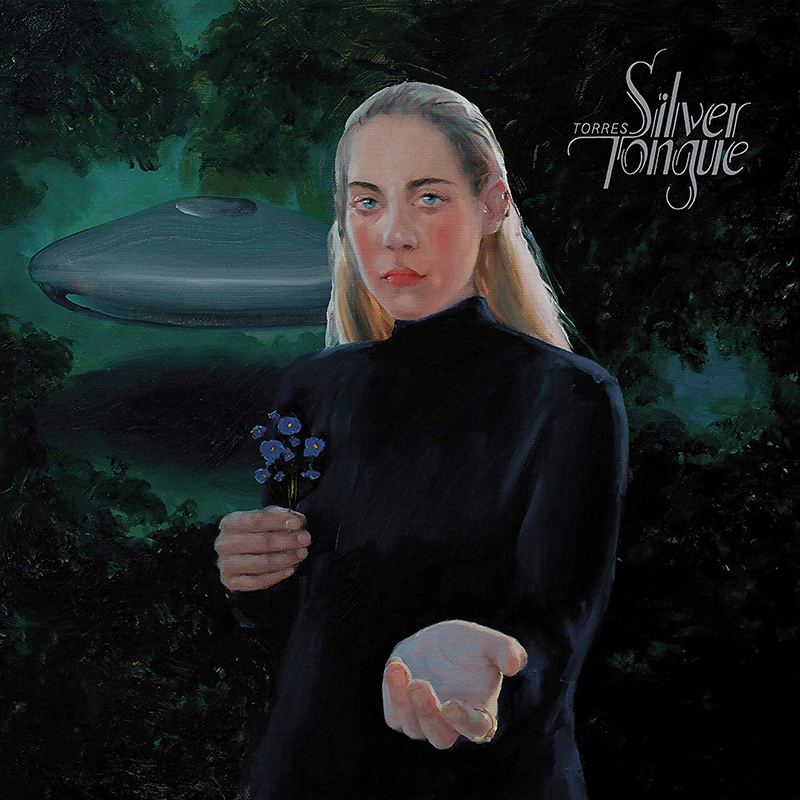 Mackenzie Scott makes up the mind behind the Torres moniker, having crafted three prior releases and now making her Merge label debut with her fourth album, Silver Tongue. Also notable is that this is her first self-produced endeavor, a sonically abundant story of love, infatuation and connection. Scott’s sophisticated grad-school-meets-shoegaze-garage-pop sound is bound to tempt most tastes across the indie spectrum.

Opening track “Good Scare” recounts the tenuous balancing act between being smitten and frightened by someone else’s ephemeral capacity to leave. Sharp percussion meets Suede-y, Alanis-esque vocals that set a dichotomous tone for the rest of the successors. Tiny snags of synth tones are sprinkled throughout several songs like firing neuron signals, lending to the cognitive dissonance that’s endemic to Silver Tongue. Scott seems to inhabit a certain bombasticism in both her soundscapes and her sentiments via the marriage of heavy guitars and rich visual imagery and metaphor.

As Silver Tongue progresses, “Records of Your Tenderness” is a strange, brief and wiry recounting of the morose moments and associations with a beloved. The clap-track that enters in the second verse makes this song feel like a hybrid of an ancient Celtic hymnal with a modern pop song. “Two of Everything” is a synth-fat, moving and dark tune that may be the tour de force of the album and something of a stunner at the midpoint of the brief, nine-track LP. With an accusatory yet vulnerable tone, this song leaves an especially notable mark. This is followed by the rougher rock song “Good Grief,” which features slick guitars and a touch of grit, a bitter attestation to brushing off rejection with a jaded notion of comparison to older forms of love.

Silver Tongue begins to conclude with “Gracious Day,” a slow, solemn negotiation with a lover not to leave after their indelible imprint is made. The title track ends the album with an ambience that hangs in the air like the smells of mid-winter.

In the new ’20s, Torres gives us a veteran album that seems like an apt acknowledgment of a new decade and year; rich with nostalgic meditations on past loves and losses, and a complex consideration of how we heal and shift. As the winter waxes on, moments of quiet contemplation on the aching will deep freeze and hopeful spring thaw will be beautifully soundtracked by Torres’ Silver Tongue. Scott will regale us with a forthcoming stateside tour scheduled to run from March through the end of May. –Paige Zuckerman