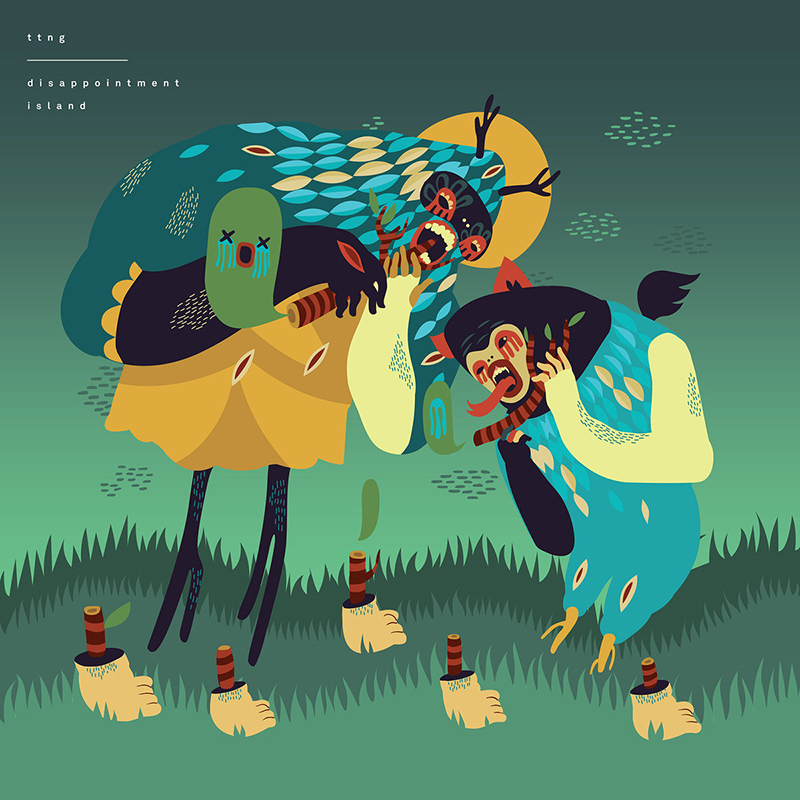 As This Town Needs Guns, they were one of my favorite math rock groups—now as TTNG, they’re back to wreak havoc. They weren’t very accurate with naming this album. Nothing here disappoints—ridiculous guitar tapping, polyrhythms from outer space and vocals that just work so well amid it all. Nope, nothing here disappoints me at all.

This album really grew on me—every track is full of nuance and complexity. I recommend shutting down everything else before listening through Disappointment Island, because there is so much going on, and it’s easy to miss a lot of it if you’re already distracted. Time signature changes between odd meters are standard play for TTNG, but the transitions are so convincing that I didn’t even notice that I should be paying attention until my second spin through the album. The drummer is a blast to hear, and the more I listen, the more I realize that he’s actually playing much more complex grooves than I first thought.

Rarely am I a fan of vocals in math rock. Disappointment Island proves that they can be done well. Vocalist Henry Tremain possesses a truly unique voice that, more often than not, melds well in between the guitar tapping and thumping bass. A couple of slow sections in songs like “Empty Palms” and “Consoling Ghosts” were just too bare for his style. Within the mix, though, Tremain is the perfect accent.

TTNG have a gentle style of playing. Everything sits just right. It’s mellow and relaxed, like watching the stars. There’s an explosion—fireworks come out of the guitar, and when the distortion kicks in, it’s business time, and thunder erupts from the bass. Everything goes silent and the calm, starry sky returns alongside the echoing guitar. Most songs on Disappointment Island start off slow and build into intense grooves, but listening to the band get there is always a surprising journey. The album is more organic, more natural and smoother than TTNG’s previous releases, and it’s a fresh take on a formula that has worked well for them: interwoven guitar melodies, warm and welcoming bass lines, soft vocals and energizing drum grooves.

Besides a lackluster opener, “Coconut Crab,” the album gets better from start to end and really turns into gold after “In Praise of Idleness.” For sure, the best-titled song on the album is “Sponkulus Nodge.” It features a polyrhythmic-as-hell drum groove as well as the choppy, distortion-all-the-way-up, full-throttle finale, which is the highlight of the album. There are a lot of fun ideas on Disappointment Island, like a lot of quick, unexpected endings and guitar licks that keep on going and going. It all comes flush together and with such confidence in the end that, even amid the chaos, TTNG maintain an incredible level of cool.

If you’re new to math rock, TTNG might take you by surprise. They are subtle masters of their craft, piecing together intricate bars of odd meter with such flow that it’s impossible to get lost. When I’m not paying too much attention, I just notice that the album sounds good. When I sit down and get cozy between the riffs and rhythms, however, Disappointment Island becomes a work of art, full of technicality I’d never otherwise have heard. –Alex Blackburn