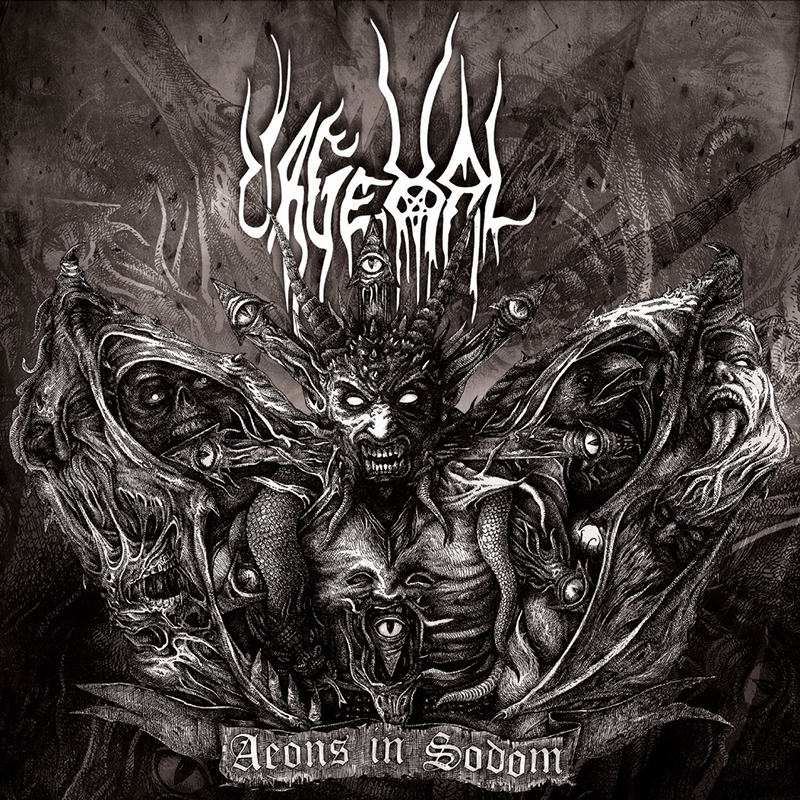 Urgehal are too often overlooked by dumbasses and hipsters (I know I’m being redundant) when discussing the “second wave” of black metal from Norway. The reasoning behind this is confusing to say the least—Urgehal should be held with religious veneration alongside the rest of the greats. These guys have arguably been at it much longer than their peers, or at least just as long, and deserve all that unearned respect you shitstains keep showering on Liturgy, whose manifesto on black metal should be illegal to own. I think one of you is going to need to take me to the hospital to get my rage hemorrhoid drained just from thinking about it (I’ll do a Cliffnotes version of the “manifesto”: shitty-scarf-wearing douche tries to emo-bukkake the coolest genre of metal with pretentious, rambling bullshit).

Now that that’s out of the way, it should be noted that Aeons in Sodom is somewhat unconventional in the way it was crafted. There isn’t a consistent vocalist throughout the tracks, which I wasn’t even aware of before I read the liner notes, despite my familiarity with the band. If you’ll allow me to describe the album in words Gordon Ramsay would use, it’s kind of like an updated, fresh and rustic approach to the band’s sound. Obviously it’s going to be different than past releases in some ways, but it still retains the essence of the band and much of what makes them unique (the almost Finnish Satanic anger, diabolical urgency and genuinely misanthropic feel of the sound). Perhaps most importantly, Aeons is a departure in some of the riffing, vocals and sound, with very good (albeit sorrowful) reason. The album is dedicated to the memory of Urgehal’s founding member Trondr Nefas (may he rest in peace). To pay their respects, many well-known O.G.s in black metal community make vocal appearances and guest guitar solos (side effects of which may include sexual arousal/melted facial features) on the album. I’ll name-drop a few of the more noteworthy guests: Nocturno Culto (Darkthrone), Niklas Kvarforth (Shining, Skitliv), Nattefrost (Carpathian Forest) and even a keyboard contribution courtesy of Lars Fredrik Frøislie (Tusmørke).

Instrumentally and aurally, this is a Norwegian black metal album made by a Norwegian black metal band. It showcases a breadth of skill by the full-time members and the contributors. Fast/holy-shit-that’s-fast, slow and mid-paced drumming, tremolo-thrashing guitars, and vocals that are consistent but not monotonous (despite the number individual performances) abound throughout, and the songs stand out on their own. “Forgettable” is a word I wouldn’t use except to illustrate inversely that the songs are memorable as shit. Aeons in Sodom opens with a disconcerting intro called “Dødsrite”: whispers are progressively drizzled with guitar feedback, and I did laugh a little when somebody in a thick Scandinavian accent starts yelling over all this to introduce the band and album—“WE ARE URGEHAL, AND WE ARE HERE TO FUCKING DESTROY YOU!” Even though I was already well aware to whom I was listening, I did appreciate the memo about their mission statement.

I was initially going to give this a raving review … and still am, a stark-raving review at that, because the cover of Autopsy’s “Twisted Mass of Burnt Decay” makes this even more of a masterpiece. Pack your bags—I guess we’re going to Sodom for an indefinite amount of time.