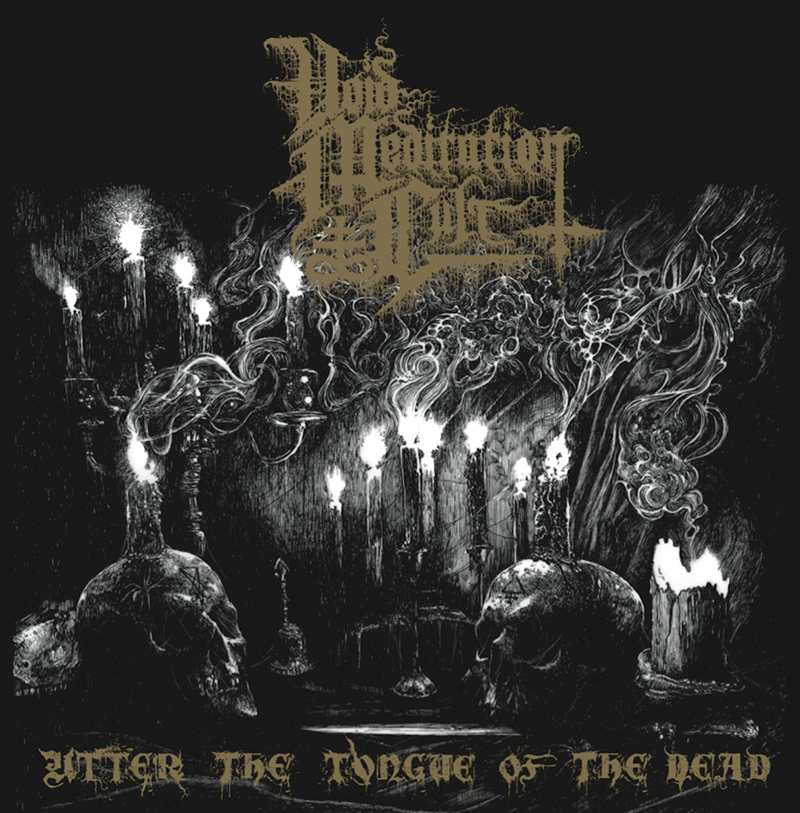 Review: Void Meditation Cult – Utter the Tongue of the Dead

Void Meditation Cult
Utter the Tongue of the Dead

With only some ugly demos to their name, Ohio’s Void Meditation Cult offer this debut, having built up some hype with this full-length release. For one, VMC have a gritty and greasy guitar tone that is unique to their artistry, and they possess the ability to blend bleak atmospheres with unique riffing. It’s superbly eerie music with heavy aggression—a far cry from your typical black metal “danger” tropes, like “Let’s burn down a church,” “Kill people,” the common “satanic evil”–type danger or even NSBM danger. It evokes something spiritual for some, or, for those devoid of any spirituality, it evokes what should be a mindfulness of the end of all things, and stimulates positive worship to this end.

Utter the Tongue of the Dead starts hard and with frequent low blows, with a guitar tone that—invoking the sound of death—cuts through from fast rhythms to slower paces. That first fourth-ish of the album lacks any higher or melodic tones—it’s extremely oppressive. Then, the album builds with its first riff in chunky tune “At the Door of an Infernal Realm.” The progression throughout the album feels like it’s building up this ugly, mean tone, but you just have to keep listening for what it’s building to. Sometimes, it feels like it’s only black metal if it has the well-known tremolo riff style. Thankfully, some amazing bands currently paving the way emphasize that black metal is not confined to the sounds everyone thinks of. Despite a heavy emphasis on death, its slower paces can suggest a doom style. It’s all semantics, really—you can call Void Meditation Cult whatever you want. I’ll call it enlightening sounds for disturbed minds. “Mould and Blood” is a highly violent, “enlightening/disturbing” track that combines many elements used in singular ways in other album tracks. I mentioned this sort of album building to a climax—a climax of death! The eerie melody and harmony of “The Shores of Eternal Night” sets the tone for final track, “Goddess of the Waking Death,” which I really wish I had the lyrics to. It’s climactic for my listening tastes, as it interchanges aggressive riffs for a slower burn and beautiful keys. I meditate a lot in my own life to calm anxiety or to just get to a certain level of mindfulness, and this form of meditation leads the mind to an ultimate ending just as the final track—nasty, ugly with desperation—terminates abruptly, just as life does.

One can interpret the band’s own name to mean many things, but after listening, it feels to me as if the void is death. Obviously, meditation really is what it means it is, and the cult is not a Charles Manson cult; it’s an intense ritual. For me, meditation of the void is focusing on the only true thing in this life, which isn’t life—it’s death. Life is perplexing, but death is all around us, and it’s the one thing any school of worship or philosophy cannot deny as fact—everything alive will die. Utter the Tongue of the Dead—call it ironic if you want, but it’s an album alive and brimming with both a dense atmosphere and amazing songs. As they say, “The Cult is Alive,” but don’t take that in its original context. Interpret this album in your own way—by listening to it! –Bryer Wharton