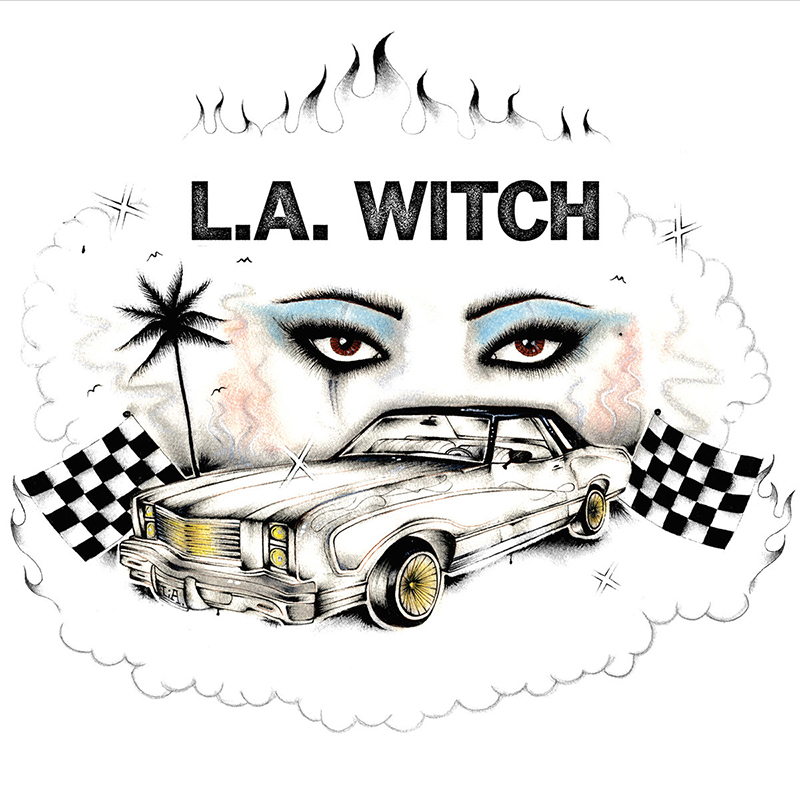 Three years of touring and writing a slew of California desert drifter-influenced tracks, and with a nomadic existence to match their style, L.A. Witch have gone from a no-fucks, let’s-just-play music attitude to being signed to a real-deal record label with Suicide Squeeze coupled with the upcoming release of L.A. Witch’s debut self-titled album. Echoed, reverb-heavy guitar mirrors the shallowness of the downtempo drums and consistently bewitching bass lines. Lead vocals/guitar Sade Sanchez, bassist Irita Pai and drummer Ellie English make up the trio that is casting a spell on all of LA and far beyond their Hollywood hell scape home base.

L.A. Witch debuted their first single “Baby in Blue Jeans,” from this album, right in the beginning of August. The single is every bit as entrancing as the band’s name. “Baby in Blue Jeans” is roped back and forth by the lull of the guitar meshed with a slow-building drum beat while Sanchez mumbles simple line after simple line—“Baby in blue jeans, I never thought I’d be so alive / I’ve seen your eyes, I’ve seen your fear, and you just might die.” Her vocals never overpower the sound they are aiming for, the essence of cool amid the nonchalance of the group. Sanchez finds the balance where all three parts of the band can truly feel like one without chucking the simplicity behind the songs that make them so catchy to begin with.

“Kill My Baby Tonight” opens the LP. Sanchez’s jangly guitar and Pai’s intoxicating thud-thud-thud on the bass are reminiscent of some decade past. This is the quintessential L.A. Witch sound. Lyrically, the group has found a niche in avoiding the typical love-and-heartbreak-song bullshit and instead opts for topics more menacing, more vile. Sanchez sings, “I’m going to hurt my baby tonight if he don’t come home on time / I’m going to kill my baby tonight / this way he’ll forever be mine.” She goes on, “I’m holding your hand / Am I losing my man?” English’s drums punctuate the track with perfect precision. And this is why “Kill My Baby Tonight” is a truly thought-out start for the newcomers.

Each song winds down the endless road of no return with L.A. Witch to their magic lair deep in the deserted California mountainside. “Brian” coos with the edge of a garage rock classic. “Untitled” rips through blues and country influence. “Drive Your Car” is as psychedelic as it is dark. “Get Lost” closes out the album as hauntingly as it began. Sanchez howls, “Save me from myself”—A cry none of us could possibly misunderstand. Don’t we all need some saving?

There are times that it is easy to get lost throughout the similar tracks on the record. One song often blends into the next, allowing for both consistency and lack of diversity from track to track. The repetitive nature of L.A. Witch just may be a part of their getting started, or it may be a part of their actual musical persona. Whatever it is, L.A. Witch are undeniably hypnotizing. The spell they’ve cast is one that will stay with us long beyond their release. L.A. Witch’s European and North American tour starts just after the album release, so don’t miss them in your city.  –Alexandra Graber