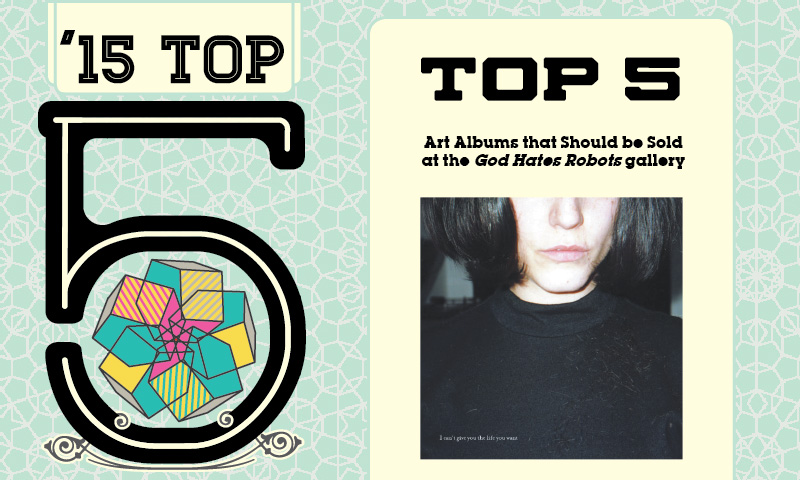 God Hates Robots opened their doors this year, and this is an appeal to hang these art albums on its walls. These art albums paved new ground in 2015. Various Artists
I Can’t Give You The Life You Want

London-based label Blackest Ever Black celebrated its fifth anniversary this year as some of our go-to purveyors of goth, gloom, industrial and “the hard-edged experimental fringe of post-punk.” Their accompanying 11-track compilation, I Can’t Give You The Life You Want, showcases the extent of the imprint’s impressive output with previously unreleased tracks from the label’s mainstays. Blackest Ever Black has close ties to the LA-based Mount Analog, and collectively, the compilation is a testament of sorts—a conceptual, sensory response—to the sprawling city and its interminable intersections. There’s a surprising but cohesive breadth to the compilation, which is excellently curated and manages to both unsettle and reassure. Each track is artful and challenging, prompting and imbuing new dimensions of lightlessness, saturating listeners as it unfolds new layers of evocative sound. Camella Lobo of Tropic of Cancer sets a haunting tone with the sublime, slow-burning opener, “I Woke Up And The Storm Was Over”—“I want all the world,” she sings, her voice hovering over ceaseless kick beats and sinking into desire and disillusionment. 500 Stamps bring a hollowed-out, DIY drone-punk aesthetic; Barnett + Coloccia’s “Tracker” is a sinister and precise venture into eerie, ambient electronica; and Exploring Jezebel intersperses laugh tracks with disconcerting moans of pleasure and spits of discomfort. Cut Hands offers “Festival Of The Dead Ondo,” a sped-up, almost manic version of his 2014 album’s title track, a heavy industrial number rife with Haitian percussive elements. Toward the album’s end is Tarcar’s gorgeous “Eija,” which overlays a swirling and fuzzed-out post-punk soundscape with Carla dal Forno’s shadowy, detached vocals. Like “Eija,” I Can’t Give You The Life You Want is a long, slow leap into the spell of a cavernous dreamscape—but it’s a witness to the pockets of light along the way, too. FKA twigs’ M3LL155X—pronounced “Melissa,” after twigs’ personal female energy—dropped alongside a visionary extended music video. As a package, M3LL155X is shuddering and irresistible. Here, twigs is more sinister and dominant than we’ve heard her before, carrying and storming us through the quaking “Figure 8,” the dense trip-hop of the standout “In Time” and the dance floor–ready “Glass & Patron.” In the video, we see an anglerfish manifested into a weathered woman; twigs as a blow-up sex doll, then seductress; twigs with a pregnant belly and rainbow fluid running down her thighs; twigs dancing gloriously in soft denim. twigs owns her creative vision: She’s unquestionably masterful and powerful, and she isn’t interested in anything else. Like an experimental documentary film or a work of performance art, Apocalypse, girl constructs a heightened reality from abstract sounds, visceral imagery and stream-of-consciousness lyrics. Jenny Hval interacts with and confronts her listeners, whether that’s by reminding us of patriarchy’s pervasiveness or, more explicitly, by calling a cupcake “the huge capitalist clit.” “Heaven” accurately captures the breadth of Apocalypse, girl: Hval is singsong, then hushed, then ear-piercing—all over the sound of running water, organ and accelerating drumbeats—while managing to mention and poeticize “Queens,” “Jesus,” “neoliberal” and “a graveyard of girls.” Hval compellingly chronicles her continual self-exploration and vivid fantasies, and the result is an album of demure, deliberate transgression. Holly Herndon’s brand of post-minimalist, process- and concept-heavy electronica is peerless, bridging the genre’s two poles: the “academic forebears” and the “club contemporaries.” Throughout Platform, Herndon toys with silence, randomization, white noise and her own voice to craft intricate, dynamic tracks. “Chorus” brings a subtle, glitched-out energy; “Unequal” layers throat-singing samples; “Morning Sun” reminds of St. Vincent; and in opener “Interference,” Herndon evokes the theory regarding human memory. Each of Herndon’s compositions (and collaborations) are rooted in an ambitious appeal to contemporary art—that here in the Digital Age, our increasingly intimate relationships with technology might make for firm starting points for avant-garde expression. Marching Church
This World Is Not Enough

With Marching Church, Elias Bender Rønnenfelt takes Iceage’s genre-bending, art-punk tendencies to a solo project loosely inspired by James Brown and Sam Cooke—mostly in the sense that Rønnenfelt gets to play bandleader in the throes of improvisational structures, some of which include cowpunk (“Living in Doubt”), sax (“King of Song”) or whispered Spanish (“Hungry for Love”). Rønnenfelt’s low snarls are slovenly, and his wails are self-aggrandizing yet conflicted. Each track is a slow, long, disquieting climb (the final song is a grating cover of James Carr’s “The Dark End of the Street”) and demands that the listener indulge Rønnenfelt’s experiment, but it works: The eight-minute-long “Your Father’s Eyes” is mostly Rønnenfelt’s moans and tinny bells, but when it courses into its peak—a gentle, somber waltz played by a brass band—it’s hard not to feel immensely gratified.