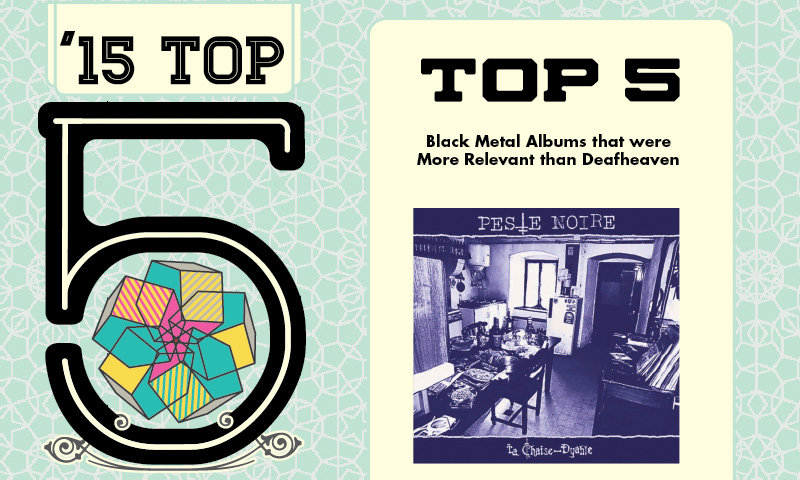 Top 5 Black Metal Albums that were More Relevant than Deafheaven

Whenever you decide to take a break from burning down Christmas trees and taking washed-out black-and-white holiday card photos, you might want to take a listen to some of these awesome black metal albums from 2015! We’ve gathered a list of our five favorites from the year, and they’re sure to bring a grim, blasphemous frown to your face. Peste Noire began their career by dropping some pretty influential black metal albums, and their style resonates throughout the oft-subversive (but oft so goddamned awesome) subgenre, an extremely impressive feat considering their relatively late arrival on the scene. In this “author’s” humble opinion, they have always militantly marched on the less-traveled road of originality and relevance with each of their albums, splits and demos. When I look back on albums that have managed to impress me, I notice that there’s a pattern of experimentation and distinctive musical elements with not only each band, but more specifically with each release. With this in mind, La Chaise-Dyable once again proves that Peste Noire have never been afraid of experimentation or incorporating stuff into their music that most bands (let alone fans) wouldn’t touch with a stick specifically designed for stirring feces—perhaps evidenced best with the fact that one of these guys owns an accordion and isn’t afraid to use it. Forest noises, though usually cliché (maybe it’s the array of farm animals … or gunshots), are followed here by a folksy, twangy acoustic passage and sung vocals, which slowly turn raspy and tortured, evoke an aura of their homeland on the opener “Avant le putsch.” This leads into “Le dernier putch,” proper black metal that’s both appropriate and unconventional (they actually whistle at one point, and it works). The triumphant “Le Diable existe” highlights their furious and disquieting style perfectly with tasteful solos and growled singing. Furious and disquieting, like I said earlier … I’d say that succinctly summarizes La Chaise-Dyable if you add in “awesome.” With this latest release, these Frenchmen have figured out what direction the wind was blowing, saw a hearty breeze moving toward a mass of incorrigible idiots who wanted the same album twice, and pissed right into it. –Alex Coulombe Forefather
Curse of the Cwelled

The English brother duo Forefather have been crafting their unique brand of Pagan/Viking/kind-of-black metal since 1997, with their first full-length, Deep Into Time, released in 1999. Each subsequent album has been sharper, more poignant and tighter than the last, and I nearly lost bowel control when this new one came out. Although Steadfast will always be my favorite (maybe it’s the nostalgia, or maybe it’s the fact that “Mellowing of the Maids” is still one of my favorite songs of all time), Curse of the Cwelled delivers a heavy battle-axe of metal straight into my ear, which I welcomed gleefully despite the permanent damage. This is unlike anything you’ve ever heard. While Moonlover would have gone platinum in a perfect world, many people find it off-putting. “The music is OK, I guess, but the vocals are atrocious,” said one of my more pretentious friends, who probably went out and hot-boxed his car with the smell of his own farts while listening to Evanescence on his stereo. He can suck it—this album, and the band that made it, objectively rule. Nasty, dark, evil—everything you’d want from these Finnish BM veterans. Horna possess that transcendental sound that makes black metal Black Metal … It’s a feeling that can’t be described accurately enough with words, only felt. I gave this to my mom for her birthday this year, saying that if she didn’t listen to it 50 times by the time I got back from getting my 4-shot iced Americano, I’d get my nipples pierced and start a PCP habit. I returned to find her crying tears of joy to “Nekromantia,” thanking me for being born, mascara running down her cheeks. You’re welcome, Mom. Well, I wasn’t expecting this at all. I’m not one of those people who say they love surprises (a gunshot wound to the crotch can be a surprise, you idiots) but this, I will say, kicks. Fucking. Ass. I’ve never loved an album like I’ve loved Melechesh’s 2006 album, Emissaries, and didn’t feel that The Epigenesis (2010) or their 2012 EP Mystics of the Pillar II shook me like that album did, despite the fact that I still thought they ruled. Enki made me stop what I was doing (another Megaman X3 speed-run) and appreciate how any expectations I have of even my favorite bands could be crushed by a tidal wave of awesome.