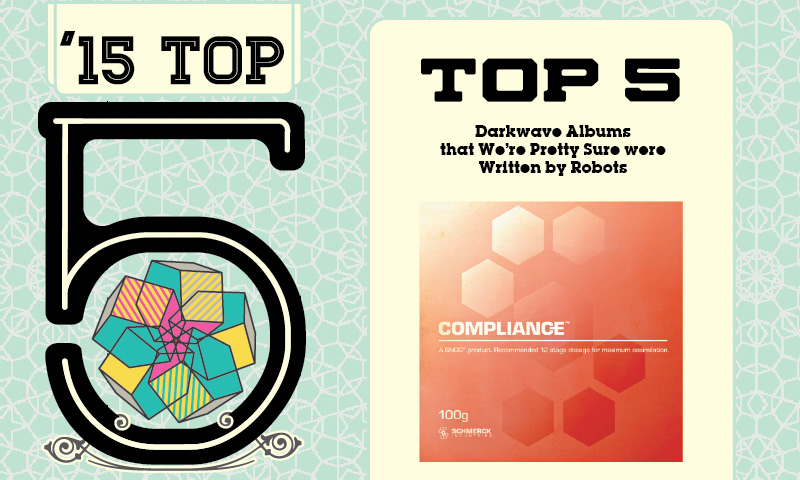 In the year 2015, we’re still a long way away from creating autonomous, AI-driven androids to take over all of our menial labor, and even further away from an inevitable uprising led by an army of robotic Arnold Schwarzeneggers. Luckily, we have our own little taste of the future in the form of these five awesome darkwave albums from this year. SNOG has always been an artist with a powerful message—and clearly, on this release, that message is only getting louder. It addresses mass consumption, Big Pharma, political corruption, corporate control and even includes the dark, ugly sides of human greed. There is nothing held back, and it is completely in your face during the entire album, and I applaud it. The messages may be abrasive to some, but those people would be the ones they are directed at. They are eloquently delivered on creative, experimental and catchy music beds that stay true to the artists’ amazing, electronic styles—which vary from childlike poetry chants to extreme experimental noise. There is no limit to the creativity here, and it is all phenomenal. “Cheerful Hypocrisy” has a driving, catchy synth beat and a whistle that stays with me as I go about my day. It will certainly give listeners a different perspective as they go through their daily duties and put smiles on their faces with its meaning and humor. “The Clockwork Man” has the pulsating, four-count beat that is great for the underground night clubs and is my favorite on this one. I enjoyed the effects that were mixed in; they were reminiscent of an old-fashioned wrong-number dial tone and a “pew pew” laser sound from an old sci-fi film. “Rich Kuntz” has a dominant yet enjoyable Goldfrapp style to it. This is an artist that always has me looking forward to their next releases, and I am never disappointed by what I hear. The experimental, electronic sounds stimulate movement, and the blatant lyrics leave no topic untouched in the political and global realm. I love how SNOG addresses those things that are on everyone’s mind, with no holds barred. The last time this German band released an entire album was in 1999, so I was very excited to hear something new from them. The wait was long, but they have not disappointed and have achieved greatness with this one. You just cannot help but appreciate Stefan Netschio’s soothing vocal style. When you compile it together with danceable, synthpop sounds, it is no wonder this band has songs that are timeless hits. All of the tracks on this release are amazing but “Daisy Cutter” and “Last Day on Earth” are the songs that stood out the most. Black Nail Cabaret
Harry Me Marry Me Bury Me Bite Me

When I first heard this phenomenal duo that was concocted in Budapest, Hungry, I was immediately pleased. Their creativity is soothing and refreshing. “Satisfaction” blew me away with its powerful, straight-to-the-point message. The darkwave beats that these ladies have put behind these moving lyrics will make you move, become inspired and bring bodies to the dancefloor. Emese Arvai-Illes has an amazing voice—it soothes, scolds and seduces you all at the same time. I wouldn’t be surprised if you hear some crossover diva house tracks from her very soon. Ego Likeness
When The Wolves Return

When you listen to music from this band, you consistently get creative lyrics about mythical, magical and haunting tales plus a phenomenal sound. Frontwoman Donna Lynch’s vocal style is commanding yet comforting. She uses few effects, which allows her true talent to show Stephen Archer has a sound that is similar to the guitar styles of KMFDM. “When The Wolves Return” has a darker feel, which pulls on your heartstrings and makes you think with its meaningful lyrics and powerful songs. This release is a mixture of gothic and guitar–filled industrial music that is properly done. The fact that this new band has the “old skool” sound of industrial reassures me that there is a movement towards returning to the music of the past. The shouting incantations are reminiscent of early German industrial, and the beats have a thunderous, stompy feel. This is a much needed refreshing retrospective on sounds that created an underground community. I find it monumental because it reminds us to keep things simple. This LA duo is one to keep your eye on. If you love the Wax Trax! style of industrial music, this release is for you.