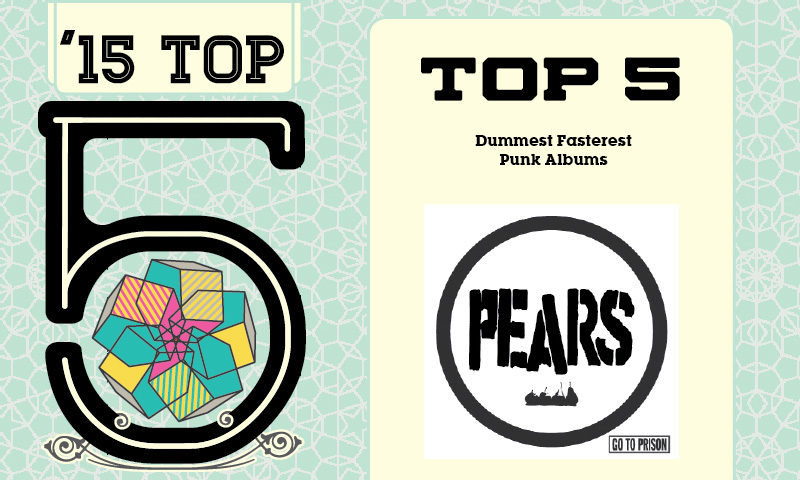 Sometimes, all you need is a wild punk album to keep you from exploding. This list offers dumb, fast punk albums to keep you sane for the rest of the year. After discovering PEARS at Punk Rock Bowling earlier this year and playing their debut album, Go To Prison, on repeat for the majority of the summer, they rapidly became one of my favorite new punk bands. Written and recorded in less than a week, Go To Prison is completely solid from front to back—it’s fast and feral one minute, sweet and harmonious another, and unsympathetically sinister the next. Part is due to their raucous frontman, Zach Quinn, who penned the lyrics as poetry while watching stop-motion and decided to turn them into hardcore songs. Every song stands out on this record, and each one is more aggro than the last. Clocking in at 53 seconds, the first track, “You’re Boring,” pounces like a rabid dog, switching from barking vocals over scorching atonal riffs to melodious singing in conjunction with three-part harmonies. “Victim To Be” is a dip into Quinn’s psychosis on dealing with inner madness, “Sycophant” touches on being different in a conformist society, and “Little Bags” delves into a bad drug trip and gives a nod to where the name PEARS came from. “Grimespree” is the most out-of-left-field track on the album—it closes with the most pounding guitar riffs and Quinn screaming in what sounds like indecipherable terror, finishing with a reference to the Descendents. Apart from Quinn’s unexpendable vocals, Brian Pretus’ guitar work is immaculate, as no two riffs sounds the same. The rhythm is on point—the drums are never overdone or out of place. PEARS’ debut album gained them inconceivable recognition in such a small amount of time and landed them a spot on Fat Wreck Chords’ roster. This album stands completely on its own—there is no other band that sounds quite like PEARS. Good Riddance
Peace in Our Time

After a near decade since the release of their last album, Good Riddance have returned with some of their best work in years. The album sounds like any other Good Riddance record, which is a good thing—Peace in Our Time sounds like it might as well have been recorded in 1996, with songs that would be commonplace in any given skate video. That’s the other thing: It’s impeccable to skate to—the songs are fast, melodic and energetic, and every two minutes, there’s another one ready to keep me on my board. One of the newest and best bands signed to Fat Wreck Chords, Night Birds are loud, hyperactive, aggressive and just absolutely impervious. Think of them as the Ramones on steroids. Paying homage to juvenile ‘80s hardcore with songs reaching an average of two minutes and holding on to the garage-based wall of sound that contains their raucousness, Night Birds don’t beat around the bush in delivering their music. These songs are punchy and rapidly blunt, but also sport some honest-to-God skill from each player that ensures no two songs sound alike. After 2011’s less-than-stellar Live by the Code, I was pretty skeptical about how this album would turn out. After listening to the two promo tracks, “The Solution” and “Mind at War,” I was blown away. Scott Vogel almost reinvented his voice on this album, as opposed to his tendency to sound too much like Jamey Jasta on previous records. Not only do all the tracks stand out, but Terror’s sound on this album also touches back to the days of One with the Underdogs. The album has an even mix of chugs and speed—you’ll be circle-pitting one minute and throwing down the next. Agnostic Front’s latest album, The American Dream Died, is fast, heavy and has some of the most disparaging lyrics these NYHC godfathers have ever penned. However, I have one complaint: Roger Miret’s voice. No offense to Miret—I mean, after 30 years of singing in a hardcore band, it must take a major toll on his voice. But my God! His vocals made him sound like he was pushing out a hard shit while recording. If you can’t get past his voice, I understand, but to me, The American Dream Died is loud, rough and holds no punches—it’s New York Hardcore all the way.