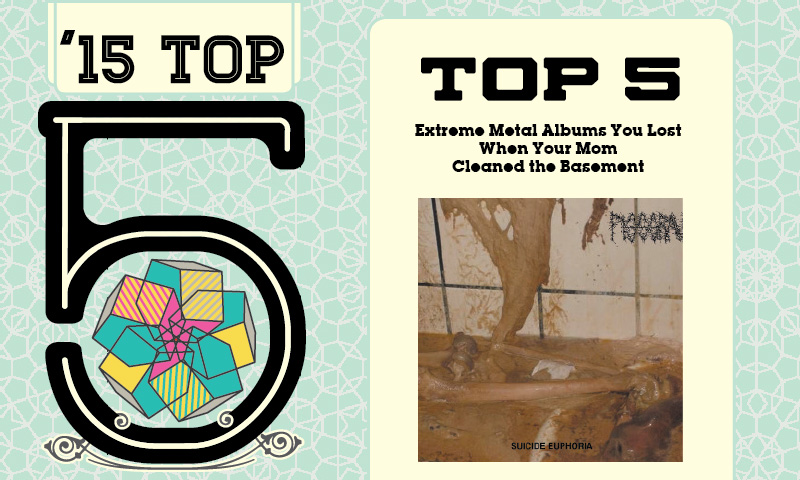 Enter Philly’s Pissgrave—with a purposefully offensive name to grab attention and gruesome cover art to boot. When I was the corruptible age of 15, my mother would have very well thrown this album out based on the cover art alone (a liquified human corpse). If you think that’s bad, look up the art for the band’s demo. If my mother heard the violent and chaotic “music” of Pissgrave, it would be in the trash, too. Now that I’m 34, she would just shake her head at me. At first listen, it’s intensely noisy and feels relatively unstructured—just a wall-of-noise-in-your-earhole sound. The vocals are so far from the standard death growl—more like the vocalist of Revenge tearing out his vocal chords. Just because the band’s name and art suggest some crappy brutal death or slam album (when offending people is all the rage) doesn’t mean that it’s one of those albums—it’s noisy death metal with an old-school vibe. The not-very-produced sound reminds me of when grind and death weren’t so different—think Bolt Thrower’s War Master on crack. Upon repeated listening, the great riffs and tremolo picking stick out, and the disfigured chaos of the record all comes together. That first riff in “Impaled Vibration” and the timing and lovely rhythm to “Mass Cremation” and other great songs will make you come back and get nauseous for the stench of that bathtub corpse. It’s one of the best debut albums of 2015. While not incredibly extreme nor lyrically gross-out nasty, this Swedish one-man project creates the ugly in the form of highly disruptive and unpleasant music. This purposely under-produced sound punches straight into your gut and hits like a ton of hammers. There are underlying themes of horror unleashed along with the punk/metal/D-beat–style music here: The intro song is a reworking of the theme from City of the Living Dead, and another song samples the eerie Cannibal Holocaust soundtrack. This full-length debut proves its repulsiveness in spades with a murky, ugly, unpleasant sound that you have never head before. It’s music for very unpleasant people. The bastard marriage of two bands has a title that, alone, is something that my mom would surely throw out. Both guitar tones for Tokyo’s Abigail and Detroit’s Shitfucker sound like each member is murdering their instrument. Abigail’s contribution here are a couple of messy, sloppy-sounding, punk-fueled tracks with fucked lyrics. Shitfucker’s tracks are a bit less crazy lyrically, but a hellish amount more metal than Abigail. They’re no less ugly—in fact, they’re uglier and dirtier, just as one should expect from a band called Shitfucker. This split is probably the ugliest set of fucked-up nasty music, but it sounds so, so lovely. The most foul-mouthed, gross-out-lyrics, laugh-at-anything-PC comes in the form of a recording that isn’t even all that “metal,” though it bears the name of the Rammstein vocalist who abandons German for English lyrics here. Lindemaan is a collaboration with Peter Tägtgren of PAIN/Hypocrisy, who wrote the music. The pure accomplishment here is the fact that after a listen or two, you’re going to be singing along to lyrics like “I burn for dicks and hoes / Ladyboy!” and songs about golden showers, loving sex with fat women and in praise of abortion. It’s not all gross, but it mostly is—then again, all the songs are fucking catchy, like gonorrhea. Out of all the brutal death metal releases this year, I could have easily thrown a dart at the mix of all the foul, gore-fueled records from this year—Serial Butcher makes the cut for this list. It may not be the nastiest, but it’s the best damn gore-pumped brutal death album I’ve heard this year. The Belgium band plays to the ’90s Florida style. The music gets the glory here, with riffs that crunch on the bones of their victims and subtle technicalities thrown in as delicacies. If you need any evidence of the crime of awesomeness on this record, just listen to “Flesh Frozen Females.”