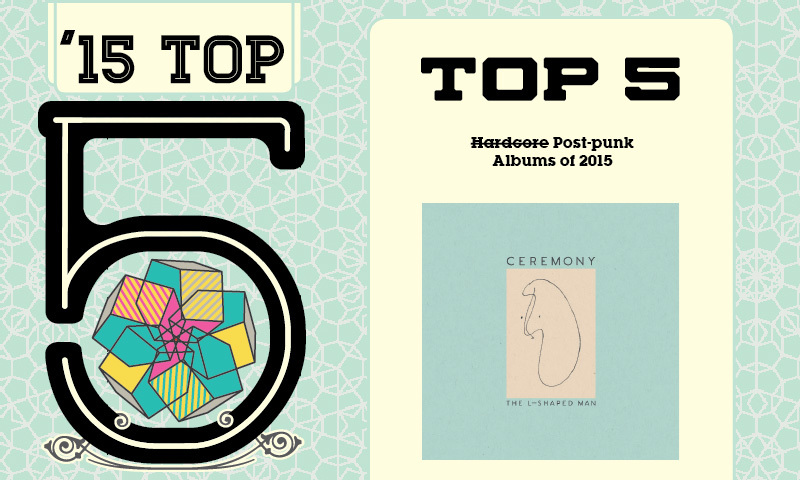 Coliseum frontman Ryan Patterson mentioned that the visceral nature of hardcore “makes it temporary,” so where do hardcore musicians go from there? The answer is post-punk! You can catch up on the hardcore prerequisites that help make for stellar post-punk albums with this list. Hardcore will never die, but it will probably go through an annoying Morrissey phase. Camo cargo shorts will give way to raw denim, fanzines will be exchanged for poetry chapbooks, and savage mosh warriors will turn their aggressive bro ’tudes inward, examining the complicated, shattered bro that is the self. Luckily, Ceremony are here to provide a soundtrack for the confusion, loss and pain. A long way from their powerviolence beginnings, and a long way still from the (admittedly excellent) Black Flag worship of 2010’s Rohnert Park LP, Ceremony channel the dark feels of Ian Curtis and Co. on their latest offering, The L-Shaped Man. Post-punk hipsterism is so prevalent in 2015 that you can’t throw a Trapped Under Ice 7” without hitting a girl wearing a Chelsea Wolfe witch hat these days, so something special has to set these post-punk punks apart from the pack: the guitar work of Anthony Anzalado and Andy Nelson. While vocalist Ross Farrar delivers a dedicated (if by-the-numbers) Joy Division–influenced performance, it’s the tension and sparseness of the guitars that really dials in the album’s despair. Songs such as “Bleeder” and “The Bridge” feel as though they’re seconds away from exploding into the hyper-aggressive Ceremony of the past, while “Your Life in France” and “The Party” continue in the Wire-channeling vein of 2012’s Zoo. For as much as longtime fans may dislike Ceremony’s newest iteration, they would be hard-pressed to deny the excellence of “The Separation,” which is as effective of a breakup song that punk rock has ever produced. Hardcore try-hards might hate on The L-Shaped Man, but when that cute girl with the chestpiece upgrades to a dude without gigantic holes punched through his ears, The L-Shaped Man will be there to help them measure the loss. The closest I ever got to a hardcore beatdown was at a Title Fight show at Kilby Court six years ago, where three or four X’ed up 17-year-olds got mad at me for not catching one of their bros stage-diving from the venue’s 10-inch stage. Now that Slowdive is cooler than Saves the Day in hardcore circles, the only thing that might change in that scenario is the speed of the music being played while those dorks try to beat me up. That’s not Title Fight’s fault—Hyperview is a good album, and though the band’s new direction is a bit too on the shoe, it has been interesting to watch them grow on each release. Coliseum hasn’t recorded a D-beat song in almost 10 years, but many a disconnected music journalist was shocked to find that Coliseum were no longer worshipping at the throne of Discharge when Anxiety’s Kiss was released earlier this year. What they may have lost in speed over the years they’ve made up for in creepiness and atmosphere. More than most bands channeling ’80s spookiness, Coliseum’s sound is definitely filtered through their punk roots. Ryan Patterson’s voice isn’t too far removed from the rumbly growl of earlier releases, so it’s the tight rhythms and subtle synth textures that show Coliseum’s true evolution. Their previous two albums also fucking rip, so probably go listen to those, too. Disclaimer: About 93-percent of this album is hateful, chaotic, hardcore fury—but on two of this excellent album’s tracks, vocalist Anthony Lucero channels Michael Gira fronting Neurosis. Following up on the awesome surprise of a sparse, moody Mark Kozelek cover on their Useless Animal 7” earlier this year, Cult Leader expand their uncontrollable violence in a predictably unpredictable way with “A Good Life” and “Lightless Walk.” It’s not post-punk in the eyeliner-and-black-candles kind of way—it’s music that actually moves beyond its initial influences. Lightless Walk showcases a band that’s actually growing—a rare feat in hardcore.