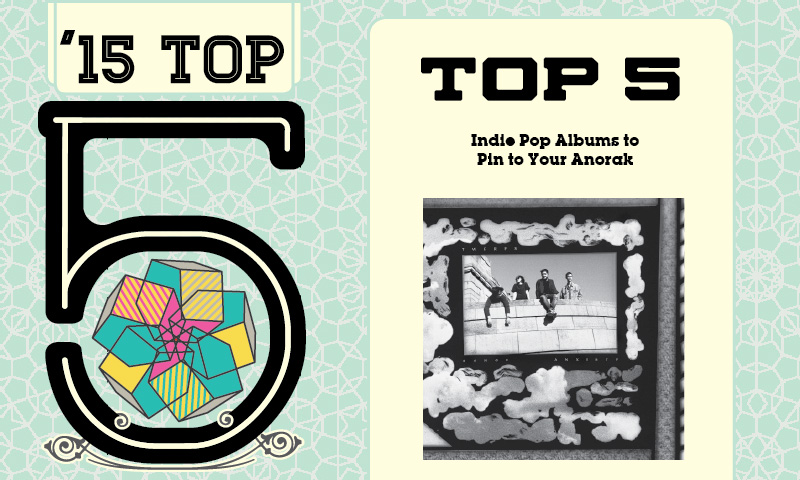 Top 5 Indie Pop Albums To Pin To Your Anorak

We get it—it’s not just a winter jacket, it’s a suit of armor for your shy sensibilities and tender emotional life. This list of pure, perfect indie pop albums from 2015 would make for perfect badges to decorate it with. Rocketing out from the fertile “Green Place” of Australian and        Dunedin jangle pop, Twerps’ Range          Anxiety is the party record for a twee Valhalla. Having sharpened their low-key, lo-fi sound for a gloss of fidelity, the Melbourne-based four-piece have crystalized their Sarah Records–meets–Flying Nun sound into the 13 cohesive tracks of Range Anxiety. Bursting with indie pop charm, the album is an afternoon-in-the-park picnic feast of perfect pop proportion, shifting listeners through various moods of indie pop—pretty, concise, honey-laced, shambling and whimsical, all at the band’s jangle-driven gait. Twerps’ Martin Frawley and Julia McFarlane push and pull the lead vocals from track to track, holding back any anxiety with serene pop sentiment and keen lyricism. From Frawley singing, “and it all keeps coming back to you,” under the dig of a rollicking, sugarcube-baited organ hook on “Back To You,” to McFarlane’s “cause I don’t want to be a stranger,” on “Stranger,” a coy call and response develops, tacking each ace tune with a conversational familiarity. Frawley invokes the movement’s granddaddies, warbling through the tracks like a coy David Kilgour—or like on “Love at First Sight,” a sly Ray Davies. Proving to be a great foil to Frawley, McFarlane’s tunes “Stranger,” “Shoulders” and “Adrenaline” add a comforting anti-macho-ness to the Twerps’ mix. All the while, Gus Lord’s plodding bass and Alex McFarlane’s crisp kit tighten things up. It’s a splendid indie pop concoction—a cohesive and engaging album of candied vocals, chiming guitars, ringing keys and lyrics close to the heart. Pure, perfect indie pop is hard to find, and it’s even harder when legions of imitators crowd the field. Thankfully, Twerps have just the right badge. Flesh World
The Wild Animals in My Life

Spiking the ebullient, C86 jangle of Jess Scott’s Brilliant Colors with the urgent hardcore of Limp Wrist, Flesh World’s The Wild Animals in My Life is a raging flame fanned by equal parts post-punk and indie pop heritage. From the raucous opener “To Lose Me” to the jangling title track, Scott’s lyrical incantations haunt the group’s bristly wall of sonic inferno—managed by Scott Moore’s sharp, ominous guitar ferocity. Nowhere is this more evident than on “Poolside Boys,” a gorgeous burner that showcases Scott’s coy drawl as it’s dragged along by the driving intensity felt by an ice bath spattered onto sun-warmed skin. Though Flesh World might not sit comfortably next to that Softies badge on your cardigan, there’s probably room on your denim jacket in between your Smiths back patch and that cute new G.L.O.S.S. button. Adhering to the cult of good song, these youthful guitar popsters write ’em like archers shoot arrows—direct and to the heart of the matter. With precision and brevity reminiscent of a wiry UK ’70-something outfit, the Baltimore trio whip up thumpin’ bass, chiming guitar jangle, nervous vocals and strident drumming into the terrific tunes of You Can’t Always Be Liked, a follow-up to their smashing self-titled debut EP from back in June of 2015. Vocalist/guitarist Patrick’s warbly croon nearly manages to transport listeners back to the golden era of the indie pop genesis story, but it’s fitting that such craftsmen have emerged from Maryland, the land of hardcore and punk heritage—these tunes are lean and slender with a cool intensity. Whether a primer for that first foray into C86 land or another badge for your never-complete collection, Expert Alterations are a worthy salvage. Tracks to visit: “Midnight Gardens,” “The Past and You” and “Alabaster.” Following up their smashing 2013 debut, Weird Sister, U.K. noisemakers Joanna Gruesome supply Peanut Butter with a confident appraisal of their sonic and psychic convictions. In 10 brief tracks, the group’s second album expands upon their penchant for sugar-bomb indie pop hooks and in-your-face punk with a headfirst leap into assured song craft, cramming rocketship tunes into a short firecracker of a record. Without giving too much away, there are guitar solos, surreal lyrical scenarios, ace tunes (single “Last Year” and “There Is No Function Stacy” are stellar), Alanna McArdle’s sugary sweet vocals (and shouts) and more, all zipped together into a noisy, cohesive statement by the band. No matter what you want to call them, Joanna Gruesome are pure fucking magic and proof that great tuneage is not only possible—it’s necessary. Fancying themselves as overworked supplicants to the global capitalist music-making machine, London-based dance-punk trio Shopping released not one but two stellar albums in 2015. Following May’s Consumer Complaints, Why Choose navigates wiry post-punk attitude with a manic pop compass, combating the silliness of the hyper-active capitalist system with pointed consumer complaints and a nervy punk energy. As guitarist/vocalist Rachel Aggs (formerly of the indie pop group Golden Grrrls) mentioned to SLUG earlier this year, their aim is not to overthrow the hegemony but to cut the gilded rug and incite the DIY punk community to nervous dancing fits. Anxiously stuffed with groovy, stop-start bass lines, jagged guitar riffs and call-and-response vocals, Why Choose will tangle your privilege into wiry knots.