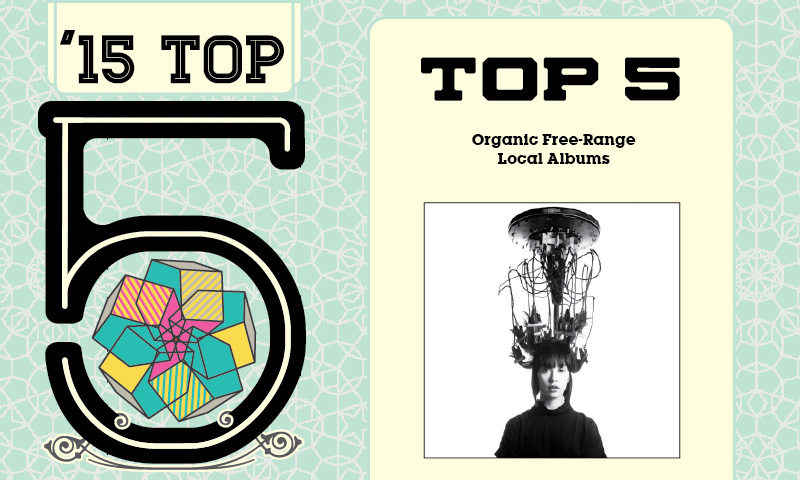 Are you the cruciferous locavore crusader who’s always first in line at the Downtown Farmer’s Market? Fill your reusable, upcycled basket with some of Utah’s best organic free-range local albums of 2015. It’s been a hell of a year for Utah County, but probably not in the way most imagined the year would go. In a city filled with people still bringing bass drums to the front of the stage like Imagine Dragons ripoffs, a good portion of the scene felt vague and unimaginative, looking more at creating a show than actually producing fantastic music. In fact, depending on the night you went out to watch a show, it looked more like live theater than a concert. In the middle of all those rose a few acts that instantly connected with the audience, scoring points on their own as musicians first before they even hit local stages. The biggest of the bunch had to be New Shack, a synthpop duo made up of Catherine Leavy and Eric Robertson, who recorded their entire album over the Internet while in separate countries until they settled back into Provo. In June, Shadow Girl finally saw the light of day and blew away many critics with the use of their harmonic structure and laid-back pop lyrics. One of the biggest factors to their sound is that little of it is pre-produced, as the band meshes retro analog synth instruments with dark-pop vocals to create fantastic tunes you can dance to, as well as be the mysterious stranger in the corner to. Shadow Girl doesn’t try to hide in a sea of overly complicated compositions or layers of processed studio magic to get the message across—this is a beautiful album from start to finish that wants to whisk you away to better, dreamier locations in your mind. Considering how a lot of the music in Utah County this year missed the mark or fell flat, that’s a ride I’d be more than willing to take multiple times over. The Love§trange
I Liked It, No I Didn’t

Self-Released
Street: 02.11
The Love§trange = The Vines + The Kinks + The Zombies

No one was quite sure what to make of The Love§trange other than that the face of their lead singer and guitarist, Karl Strange, could be found on every lamppost that Provo PD didn’t tear down. When the time came for the band to come out with their debut album, they hit hard with a rock album that felt like a picture of modern indie with a twist of early ’60s rock. Clad in professional suits and an array of guitars at their disposal, the (then) trio captivated audiences with catchy, singalong hits and an album that didn’t try to be anything more than fun to listen to. 2015 was nearly ruled by duo bands, utilizing their knowhow to bring a full-band sound into a two-person effort. One of the most surprising albums came to us from Provo-based dark-synth band Oceanear, who dropped their self-titled album just before the spring. The album shifts from moments of feeling afloat among the clouds with electroflowing beats to wading through the pools of dark wave that surround every track. Along with the softly spoken vocals, this album was meant to lull you into a false sense of ease only to become a electro-pop chill album. This four-piece group out of SLC kinda came out of nowhere for the alternative and indie scenes. Their self-titled EP sounds like a band slowly falling down an echoey canyon as their tracks bend and weave around the walls and bounce back into your chest. It’s music that should be blaring on a radio in the back of a coffee shop as shady people conduct shady business—the kind of tunes to be heard on a scratchy radio on a 3a.m. drive to anywhere in the desert. It’s the kind of dreamy pop/rock that’s okay to enjoy without feeling like you should be drinking Pabst. Channeling a pop/alternative kind of rhythm, Violettas have captured a fantastic ‘60s vibe in their music. Comprised of Provo music mavens Elizabeth Holden, Stephen Cope, Stuart Wheeler and Jacob Hall, the band rose quickly as an alternative to the rise of “superstar rock” that dominated Utah County and produced this haunting-yet-beautiful album late in the year. If there were a counterculture to the counterculture in Provo, Violettas would be one of its leading members, trying to make the hometown music more lo-fi and lovely.