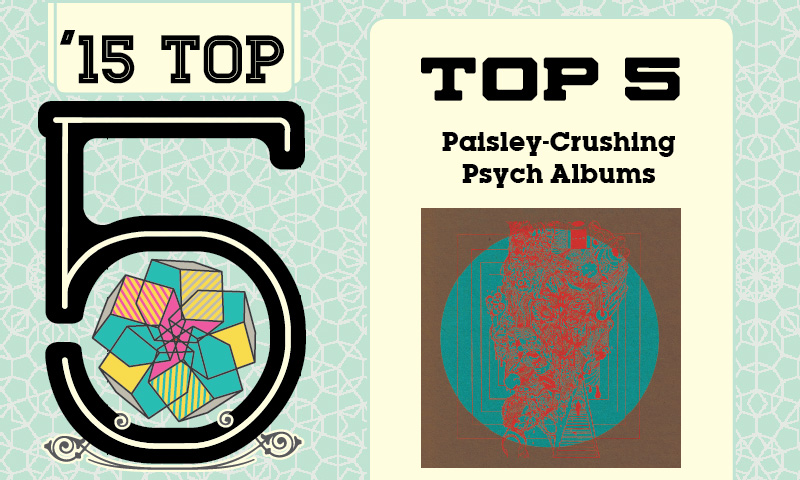 We get it—you like Dead Meadow, bro, but there’s a lot of psych out there that breaks this mold—psych to bang your head to and to do a spooky dance to. Here are five psych albums that keep the genre interesting. II starts with a buzz in your ear—as if briefly confronting some nameless, psychic itch that no amount of thinking has ever been able to scratch. Suddenly, you realize you’ve given this dormant thing a hefty saddle, and the son of a bitch is on a full gallop, taking you headlong into the melting desert of all things. There are weirder parts, too, though. Led by primary songwriter Matt Hoenes, Salt Lake’s seasoned psych rock outfit Albino Father released II earlier this year, and it remains one of the more significant contributions to our music community. To genre-pigeonhole them for just a moment, Albino Father have navigated a sound within the psychedelic umbrella that evades both old-school era circle-jerking and the almost overwhelming weight of doom-metal interpretations. II stakes out its own place in being undeniably anxious. The guitars seem to both crunch and groan over the top of ominous drum lines, which echo as if being played down a long corridor (“Disappear”). It makes uncomfortable riffs sound playful (“WTTV”) and old beats talk dirty (“The Milk Comes In”). Drowning in reverb, Hoenes uses indecipherability to elevate the album’s lack of resolve. You understand him only in tones—the way a memory might play after a night of debauchery. Perhaps, though, the real achievement of this album is when it’s having fun—because it makes you earn it. Though it’s somewhat of a theme, the track “Heavy Fucking,” especially, leaves you floating face-down in a swamp for four solid minutes of weightless despair until you actually become the swamp—wielding the energy of the very thing you thought had doomed you. My advice: Pick this up at your earliest convenience. It’ll teach you how to deal. SLUG’s fifth edition of the Death By Salt series stands as a hydra of the many heads that have contributed to the era of the DIY, psych/garage rock ethos that has reigned in SLC throughout the last four years. As it blends some of our city’s most heavy-hitting newcomers and veterans, the collection stands apart a little in its attitude. It’s upbeat, weird and generally just has good time. Though they definitely couldn’t fit everyone into this, I recommend that locals in the music community snag this up. It’ll make you nostalgic about the present. It wouldn’t take much to convince me that the category phrase “Paisley-Crushing” was directly pulled from WAND’s blueprints for the making of their latest album, 1000 Days. Unlike many of their contemporaries, WAND often introduce their songs with flowery, minstrel-like singing and then rain down on you with bass and guitar tones fit for theme songs of mountain-dwelling villains. The pattern repeats itself throughout the album—sometimes within the same song, and sometimes between them—but it’s a fun ride. If you like their style, check out their other album, Golem, which they released earlier in the same year. In Mutilator Defeated At Last, Thee Oh Sees created an album that deviates from the more straightforward fuzz jams, which stretches their garage rock style with echoing guitar asides, organ lines and even one acoustic track. The result is a nicely textured rock album that takes breaks where it needs to, but is sure to ramp up the pace before the listener gets too comfortable. It’s a good reminder that even with the amount of material already available, Thee Oh Sees still have a lot of love to give. My personal favorites are “Withered Hand,” “Sticky Hulks” and “Rogue Planet.” For those looking for some fast-paced psych rock that’s outside of the prevailing ’60s garage sounds, Undertow is an album that takes steps in an interesting direction. This British duo just released their second album this year, and it’s filled with moody, flanger-heavy guitar tones that are reminiscent of the first psych revival of the ’90s. Tracks like “Running Wild” feature the longing sneer of lead singer Eoin Loveless over the top of chugging riffs. However, there are also moments of blues with “We Can Do What We Want” and “The Snake.” If you’re a fan of psych rock, give this one a try. Let me know what you think.