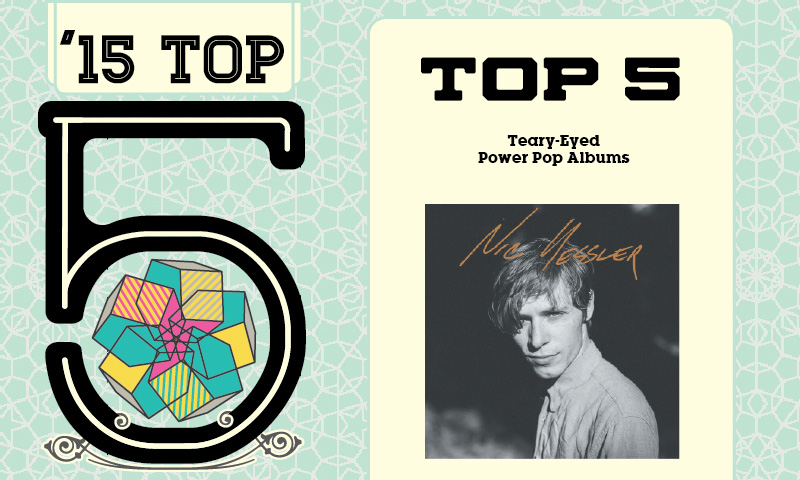 Power pop packed a punch in 2015, and this list proves it. Whether you’re more excited that Warm Soda’s Symbolic Dream stayed true to form or that Young Guv’s Ripe 4 Luv pushed power pop’s boundaries, this list of power pop albums will bring you tears of joy. Nic Hessler’s Soft Connections stands as the pinnacle of 2015’s power pop offerings, both punching in a weighty teardrop and diversifying this rock n’ roll form. From opener “Feel Again” to closer “Soft Connections,” Hessler takes listeners on a bubblegum-clacking rollercoaster of lustful aches—and it hurts good. “Feel Again” demands attention with a prominent, mid-tempo beat, and its stretchy guitar slides yank heartstrings and cushion Hessler’s dreamboat singing. On “Hearts, Repeating,” Hessler asserts that Soft Connections will continue to pine for the proverbial lover, singing, “With a kiss, eternal bliss and I’m gone,” wherein he punctuates that “gone” with an “ah-ah-ah-ah.” Even at its most saccharine, the album varies, to process all that sugar. “Permanent” eases into wistful acoustic-guitar passages. “All in the Night” compounds the acoustic conceit with a dark, psycho-emotional theme: “I just can’t seem to get you off my mind,” Hessler croons as a tom-y drumroll bolsters a shimmering synth solo. “Do You Ever” syncopates via a groovy bass line and a bouncy backbeat in its verses, which may lend to up-close-and-personal dances with your own lover amid its playful tone, its coy smile. Throughout the record, Kathryn Penquite’s high-pitched female vocals peek through, and Avi Buffalo’s Sheridan Riley sings a demure verse on “Into the Twilight,” which aurally simulates the voice of Hessler’s other, for whom he yearns. “(Please) Don’t Break Me” pleads beyond its title, and cumbia-esque rhythms broadcast its visceral desire. It’s “Soon You’ll See, Kristine,” though—with its punchy riffs—where Hessler blossoms through his honest, despondent sentimentality: “If you don’t take me, I will understand.” Summer love burns bright in this pop hearth, and it’s fresh with each spin, deserving of your love. I’m not being facetious when I say that Ripe 4 Luv reminds me of the Muppet Babies theme song—I mean it in the best of ways. Young Guv’s (Ben Cook’s) delay-dipped vocals shoot Cupid’s arrows through tickers and seasons them with sugar, and don’t nobody care one bit. Opener “Crushing Sensation” and Track 2, “Ripe For Love,” are stare-in-your-lover’s-eyes dance tracks until they morph into musical make-out-session enhancers. Young Guv peppered a couple spacey songs (“Aquarian,” “Wrong Crowd”) through the album, which round out Ripe 4 Luv and put the more rock-forward tracks like “Kelly, I’m Not A Creep” at the peaks of its topography. The mix and, again, Guv’s vocals impart an experimental feel for the record, which will continue to wear out turntables worldwide. Cry orgasmic tears of joy with Ripe 4 Luv if you haven’t yet. OK, maybe Symbolic Dream doesn’t have tears welling up and coating eyeballs. Perhaps it induces leather jacket purchases and has listeners smoking outside of the club, on the prowl, while Warm Soda soundtracks their inner turmoil. It’s the tenderloin cut of the hetero male psyche, as “Cryin For A Love” might indicate. Each track, at its core, emulates that sort of fantasy: totally and unquestionably badass, slick and cool. The delivery, however, hits sound waves in a boyish manner that exposes Warm Soda’s earnest feels that are unquestionably endearing—but remember that boys don’t cry (per “Lemonade Lullaby,” anyway). Favorite track: “I Wanna Go Fast.” Admittedly, Calling Out can be a bit homogenous at times. It’s frontman Ezra Tenenbaum’s consistently weepy, pining vocals and bassist Shane O’Connell’s punchy bass-playing, though, that fortify the album as a power pop tour de flowers on each track. Tenenbaum’s guitar work jangles then punctuates with jabbing leads, such as on “Trampoline,” and his tenor register convinces of his conviction to artful melancholy. “Pretty Torn Up” is Calling Out’s top track, as the quickened tempo and pattering hi-hat on the “I’m pretty torn up” chorus generate emotional urgency, with a catchy effect. “Dust In The Sky” follows suit. All in all, EZTV make soda pop–sippin’ go down easy during an audio cruise down the main drag in your Anytown, USA—or wherever. Dick Diver might not immediately identify as power pop (it’s not one of their Bandcamp tags, at least), but Melbourne, Florida appeals with demure singing to suggest that they might welcome such a reading. The synthesizers that flare up in “Year in Pictures” put a jitter in power pop’s usual step—and so does the guest artist Oscar O’Bryan’s saxophone work. Drummer Steph Hughes compounds these instrumental accoutrements as she takes the lead on lead vocals in “Leftovers,” casting feminine eddies that persist through the record. “Beat Me Up (Talk To A Counsellor)” features bassist Al Montfort channeling a bare indie pop vocal performance similar to Calvin Johnson. Indeed, Melbourne, Florida varies wildly from beginning to end. Opener “Waste The Alphabet” puts some o’ that bubblegum sweetness on the tongue in your ear, though, which piques the interest of power pop lovers and dilettantes. Listen to “Tearing the Posters Down” and tell me you don’t hear it, too.