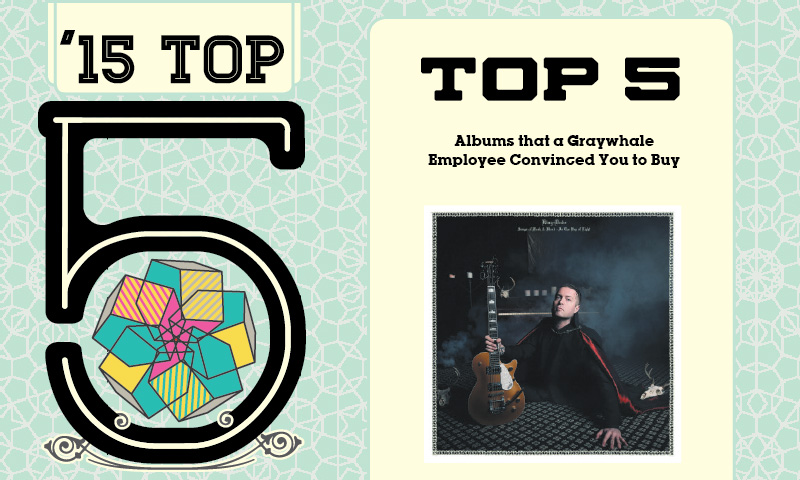 Top 5 Albums That A Graywhale Employee Convinced You To Buy

Hey there, audiophile—you looking to dig deeper for your collection? You can find albums in this list at Graywhale Entertainment, written by a certified Graywhale employee. Graywhale employees see you moving across hallowed audio ground and hear your references to Chelsea Wolfe’s discography about death, blood and darkness. It’s impressive to find you straying so far from the norm of the sonic flock, but maybe it’s time to go beyond … Don’t resist—just succumb: Let King Dude take you deeper into darkness with high priest of gothic folk TJ Cowgill’s haunting vocals that curdle souls with grief, death and despair. “Death Won’t Take Me” sets the tone for the album with the slow, venomous sounds of Cowgill’s voice oozing out raspy, snake-charmer lyrics set next to a Twin Peaks–style, eerie piano key progression, choked to a higher octave. Songs of Flesh and Blood is grounded by the sorrow found in Nick Cave’s classic album The Boatman’s Call, distilled by The Handsome Family’s dark ballads. King Dude calls upon bipolar extremes, mixing rock n’ roll with soft pipe organ hymns that bleed out on a single note through the duration of “I Don’t Want To Dream Anymore.” Only after being slowly dragged beneath atmospheric keys tangled in lightly brushed Gretsch guitar strings—with only song lyrics and vocals keeping the mind from dissipating into the ether—can the album be fully understood. With a swift cut to “Holy Water,” the spirit of Ennio Morricone gushes out sounds of slightly aggro spaghetti western ballads. With nothing left, King Dude kills the listener softly with “You Know My Lord,” offering an airy piano progression along with vocals of gravel strewn down a deep well. Pick up King Dude’s latest album, Songs of Flesh and Blood, at multiple Graywhale Entertainment locations across the valley for the low price of $12.99 on CD and $19.99 on vinyl. Ask how you can get $1 off this album and all of King Dude’s future albums with a Killerwhale Membership. Insect Ark stands within the genre of “homework drone.” The music can keep listeners focused and centered while studying (which is uncommon) with the sounds of Dana Schechter, solo artist who created the Portal / Well on her own by mixing a melodic lap steel, moaning synthesizer built upon a strong bass all hammered together with computerized drum beats. Schechter brings long, drawn-out, heavy tones echoing in a range of octaves over the course of Portal / Well as a baseline current for the album. The lap steel’s sounds found throughout Portal / Well creates the keystone to that baseline current, though it’s hard to discern after it passes through an array of pedals. These sounds recall the violin work found in pre-2013 Cicadas. Portal / Well is not an easy find at the local Graywhale Entertainment, but if you do find this rare CD hold on to it and don’t forget to ask about the option to special order rare finds such as Insect Ark. To be honest the jazz and blue note sections at Graywhale here a hard time enticing non-jazz visitors searching for “epic” music. Naming an album The Epic definitely helps entice listeners into the vast jazz genre, but a name is just a name until Kamasi Washington delivers on that name. Saxophonist Washington can certainly deliver as the Karl Malone of jazz music, giving any listener three hours of outstanding playing time. After listening to the entire set (more than once), it’s easy to see how The Epic plays homage to plenty of the greats like John Coltrane, Miles Davis and, of course, Weather Report, all while Washington’s adventuring out into his own realm of jazz, and in conjunction, blurring the lines within the sub-genre. If you’re not into jazz music, let Washington be your gateway into the scene. Next time you’re in a Graywhale Entertainment store visit the jazz section and look into picking up something truly epic. When Steve Gunn’s name comes up in a Graywhale store, most patrons have no idea what employees are talking about. In addition, mentions of The Black Twig Pickers elicit little more than blank stares. Although, if we mention that Steve was one of the Violators for Kurt Vile’s band, one might think they have an idea of the sound for this album, but this is not the case. Much like being a violator, Steve has set himself up as one of The Black Twig Pickers on Seasonal Hire, allowing for the thick sounds of the Appalachian Mountains to present themselves in the form of banjos, guitars, fiddles, harmonica and the odd but beautiful sounds of the mouth harp. If you’re interested, find Seasonal Hire in the indie section of most Graywhale Entertainment locations. Nowadays, as ‘00s raised adults continue to push the retro cycle on the music timeline the dial has reached and passed ‘60s psychedelic and garage rock, leaving a tie-dyed heap of psychedelic bands. Dengue Fever could be considered one of those ‘60s psychedelic bands if it wasn’t for the high amounts of Cambodian influence injected by Chhom Nimol, the vocalist who sings Khmer-language lyrics. Dengue Fever creates a classic organ sound reminiscent of “Light My Fire” along with smokey drumbeats—and tamborine. Listen closely, and the sounds of Bollywood can be heard in the guitar throughout the album. If you’re interested, find The Deepest Lake in the world section of most Graywhale Entertainment locations.