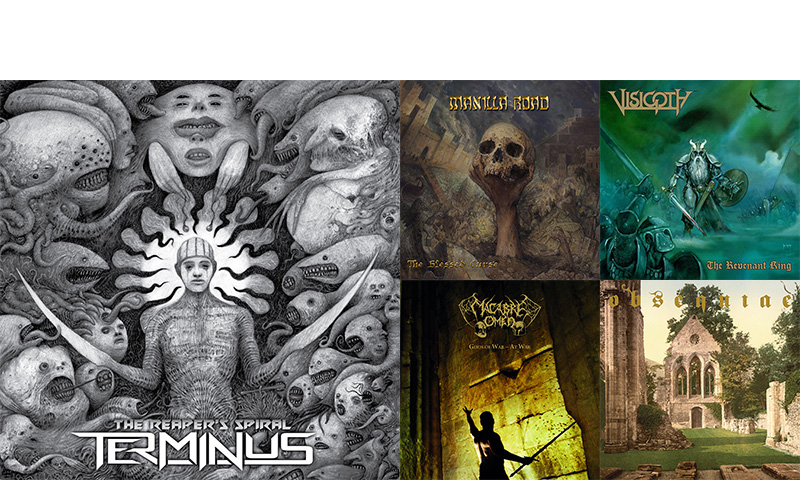 Surging Forth from the Underground: Truest Underground Metal Albums of 2015

Quality and variety abounds among metal albums released in 2015. True underground metal has always been plentiful, but this year’s releases evidenced a true culmination of the rising tide of great metal acts over the last decade. It’s clear that the pool of new and talented bands has only been growing year by year, while established favorites have been releasing some of the greatest work of their entire careers. More attention than ever has been diverted away from the popular pablum as eager converts to the cult of heavy metal look deeper to see what’s really going on in the genre. Strap on your bullet belt and get ready to slap a new back patch onto your kutte, because if you like your music loud and heavy, you’re going to love our top underground metal picks of 2015. 11. Deathblow
The Other Side of Darkness

Let’s start things off with what is probably the best death metal band ever to grace the salty stages of Salt Lake City. In case you’ve been hiding out in an abandoned fallout shelter for the last seven years, Deathblow put on a raucous live set every time they play, and they’ve got some serious cred in the SLC metal scene. The Other Side of Darkness collects five of the newest tracks they’ve been using to stir up mosh pits at venues across the valley. Holger unleashes riffs that bathe the crowd in the fetid viscera of old-school death-thrash, while Paul Lachica and Dan Alexander launch their two-pronged rhythmic assault. Though these guys have spent much of 2015 trying out a cast of new guitarists, every show they’ve played thus far has slain the one before it in terms of sheer energy and intensity, with their performance on Day Two of Fall of Zion standing atop the corpse-pile. Whether or not you’ve seen them before, keep your eyes peeled for Deathblow’s show schedule in 2016. This is one live act you can’t afford to miss. 10. Sulphur Aeon
Gateway to the Antisphere

Writhing like the sinister tentacles of an elder god, Sulphur Aeon‘s tumultuous death metal portends an awakening of the dwellers beyond the stars in their dire obeisance to the Great Old Ones. One minute, Gateway to the Antisphere grinds you to dust with its churning riff vortex, only to unveil the stellar majesty of Azathoth and his yawning portals of profane hunger. This musical tribute to the brain-warping mythos of the beyond takes a bold step toward the gate opened by the stunning Swallowed by the Ocean’s Tide, lurking at the threshold of true Lovecraftian madness. While plenty of bands have toyed with the necronomic forces of cosmic evil, few of them have peered beyond the veil to glimpse the mammoth power of the ancient ones with the mind-shattering clarity of Sulphur Aeon. Beware itheir seductive whorl, a death metal so pure in its viciousness and gleaming with alien allure as to escape the very powers of description. When Magic Circle dropped their self-titled debut, it caused some serious ripples among the heavy metal faithful. This gang of Bostonian hardcore veterans ripped out one of the greatest doom metal releases in recent memory, as if throwing down the gauntlet to the stagnant doom metal scene to remember the teachings of Witchfinder General and Pentagram. Following an album with that kind of impact, Journey Blind arrived to some pretty doughty expectations. This underground metal album is a straight-up rock n’ roll romp that takes no prisoners and makes no excuses about what it is. Chris Corry‘s gritty, groovy riffs raise the tattered flag of rock beside the dusty banner of doom metal. Meanwhile, Brendan Radigan blows me away yet again with his passionate and unmistakable vocal style. The spirit of true metal lives on in the bold vitality of Magic Circle, and Journey Blind is yet another manifestation of their ferocious sincerity. 08. Death Karma
The History of Death and Burial Rituals Part 1

While 2015 seems to have been a banner year for top-tier death metal albums, Death Karma’s The History of Death and Burial Rituals Part 1 sticks out in my mind like no other. Savage, chaotic death metal combines with pitiless black metal intonations in a whirl of madness and melody that threatens to overtake one’s sanity. The pure strangeness of this release would be reason enough for it to rank among my favorite releases of 2015, but it’s backed up by some seriously incredible musicianship. Infernal Vlad plays everything but the drums, and his insane vision for this underground metal album can be heard infecting every song, giving the neurotic vacillations of each instrument a weird coherence to a central, orchestrating force. “Madagascar – Famadihana” chills the spine with a chanting choir that pierces through the inferno of blast beats and distortion, while the sinister dissonance of “India – Towers of Silence” gleams with an audible malice. If you’re in the mood for some delirious death metal, Death Karma will slake your thirst for the weird and macabre. Over the last few years, plenty of heavy metal bands have reunited to relive their late-’80s heyday. Few of these releases have proven any more than a mere novelty, but Satan are a major exception to this trend. Atom By Atom might actually be better than the band’s classic catalog. Every song is an absolute banger, with “The Devil’s Infantry” leading the charge alongside “Ruination,” and it’s clear that these guys are having way too much fun writing and performing their new material. Throughout the album, you can just hear the band’s playful, at times experimental, approach paying off time and again. The band shows a distinct prowess in their genre, weaving manic, frenetic melodies into mature NWOBHM riffcraft. The result is nothing less than an unforgettable release, forging Satan’s eternal throne in the halls of heavy metal mastery. Anyone who says Anareta isn’t as good as last year’s Ecdysis is completely missing the point. Anareta, though it may not have the incisive emotional panache of its predecessor, ventures deeper into the vast new frontiers of death metal that Horrendous have only just begun to explore. If nothing else, this underground metal album shows just how much room there is to experiment and explore, even in this most venerable and respected genre. That aside, Anareta utterly rips. Each song has a familiar lugubrious melodic sense to it, but the album overall feels far more mature and intentional than the meandering Ecdysis. “Siderea” vaunts with an almost operatic doom-death bombast, while “Acolytes” surges with unrelenting vigor and intensity. While I have no doubt that Ecdysis will inspire its share of imitators and acolytes, Anareta is the album that will show a new generation of death metal faithful just how deep the rabbit hole goes.