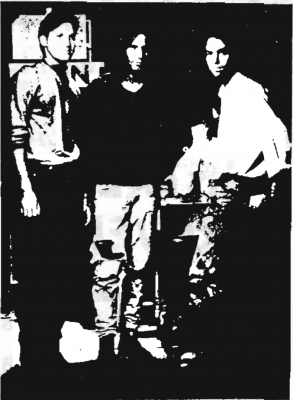 Subject To Change is a trio consisting of Dave Russell, a multi-talented musician who contributes bass, keyboards, guitar, cello and vocals, Pat Munson on guitar and vocals (and a formidable impersonation of Charles Bukowski) and John “Hooter” Huettlinger, who brings up the rear with his flawless drumming.

Together, STC devises a varied sound flavored with the influence of the ‘60s. Sounds are melodic, acoustic, rhythm and folk/country harmonies as well as hard-cutting, streetwise rock and roll. Their influences stem from Neil Young to Elvis Costello.

Obviously, STC can take on many appearances. Their songs can range from quiet ballads to raunchy foot stompers. I would place them in a category welcomely apart from the “power trio” genre. Rather than stretch the sometimes-limiting one guitar and bass configuration, they can ease back and bring the volume down and offer quiet, thoughtful passages. Such an example is “I Am A Tree”, which also demonstrates their skill in lyric writing. Other highlights are “Big Ball” (winner of the K-UTE talent search), “Blonde on Green” which will be found on the someday-to-be released City By A Dead Lake compilation.

Unlike a lot of Salt Lake’s “big name” bands, STC fits into the professional musician mode. They play some covers and the occasional frat gig. Some shallow individuals may term this as selling out for cash advantage, but if it means the chance to play their well-received, original music, hey, more power to them.

Regardless of your musical taste, you should really check these guys out; you will be pleasantly surprised. You can see them 4/6 & 4/20 at Bar & Grill and at a great show at The Word 4/21.