Willie Tidwell and the Roxy Age

Last month, we got a package from H.Reese, a former member of Willie Tidwell, in response to the #5 SLUG issue about the history of punk music in SLC. We thought it was interesting and we thought you might like to hear it. Consequently, we would be interested to hear from members of other bands mentioned. 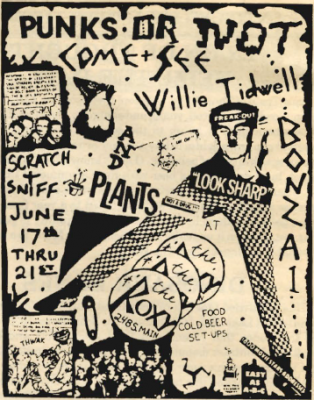 Historically, Willie Tidwell may have been the very first band in Salt Lake City to rattle the spirits of the town’s rock bar patrons with the likes of “God Save The Queen,” “Beat on the Brat” and many other punk or new age covers. The group was originally formed from the remnants of a band called Good Question, with Steve Mcallister and Mike Smith, and pop group called Banshee bringing Henry Reese and Ken Grimes. The fusion occurred in December of 1977 and was initially headed into the mainstream of Salt Lake FM rock rut. However, after some months of basement work and some long-since lost recording works, the group unanimously decided to embark on what was thought to be the “wave of the future.” We tried to do it slowly because no bar owners in Salt Lake would have much to do with local bands much less anyone who smelled of punk or new wave.

When the group originally rose in popularity at such clubs as Uncle Ernies (now Uncle Albert’s), The Crazy Horse Saloon, Abbey Road, The Sun Club (or East Room), and Ogden’s Hermitage, the success was due to our renditions of popular FM mainstream rock. Each night that we played, usually in the later sets, we unleashed the Sex Pistols, Ramones, Stranglers and Nick Lowe. The crowds seemed to enjoy the change since there were some occasional restraints and all was done in good taste.

As the shows continued on, the transformation was ever present, but at about the time of the release of our record, we had written more original tunes that we felt fit nicely into that narrow slot we had formed for ourselves. Songs like “Beat Me, Fuck Me,” “She’s a Pig,” “Why Are You Kicking Me,” “Kung Fu Midgets,” “Live in Maid,” “Garage Sale,” and “Dirty Kids,” began to bring in a different crowd to the old established clubs and bars that we had started in. This was a change we were working for, but the club owners and managers began to dislike what was going on because it was totally alien to them. Mysteriously we found ourselves unable to book ourselves anywhere in Salt Lake unless we accepted a 50% pay reduction with no portion of the door cover charge. That is where we made most of our money before. We found out later that we had been blacklisted. Bands such as Hot Rockets and The News began filling the new wave gap with cover material of a much more benign nature, slowing the transition a bit. One club in Salt Lake that was not aligned with the established group was the Roxy which suffered from poor location but was willing to allow anyone to do anything, so new wave night was born.

The Roxy period may not have been the exact start but it was the first serious effort with some borderline assistance from some KRCL radio DJ’s. There was also the one and only New Wave Fest at the East Room which adjoined the Old Sun Club. The event was a complete success featuring The Plants. Bev and the G-Men, Willie Tidwell and Spitten’ Teeth. About 450 to 500 people showed up for the night. In spite of the years, I do recall the New Wave Fest and the start of the Roxy phenomenon being very close chronologically with KRCL playing a major role by promoting “the alternative,” to Salt Lake youth. 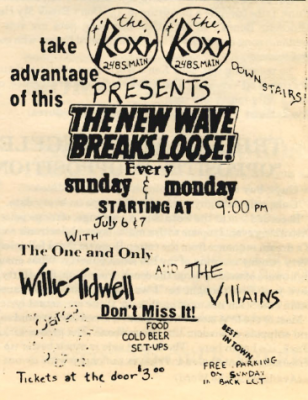 During the Roxy period Willie Tidwell provided the P.A for the most part and mixed sets with the likes of Angle. The Plants (The Plants later reorganized as the Athiests), The extremes, The Informers, The Walletes and a few probably recall The Villians in its original form playing something that resembled early ‘70s metal. My personal favorites being The Boards of course. Many other groups crossed the stage in those days but memory of them has faded from me, a possible result of all the slam dancing that occurred.

The nights at the Roxy lasted for the better part of a year with no significant increase of support from the general public. With the demise of the more popular groups such as The News and Hot Rockets, a quick return to mainstream FM style was seen around Salt Lake. It should also be noted that the economy was in a state of recession in late 1980, serving as another detriment to the Roxy age. Faced with a growing financial strain as well as a resentment for aristocratic compromise, the members of Willie Tidwell agreed to disband leaving the second record project unfinished. Of the members, Steve lives somewhere in New York City and continues to pursue musically related ambitions along with some of the ex-Boards. Mike drives a truck for a living and we have played a little in his basement on occasion. Ken Grimes or “Skuzo” as he was called in those days is a clerk in a law office, of course now he’s Mr. Skuzo. As for myself, I write a lot of things lately.