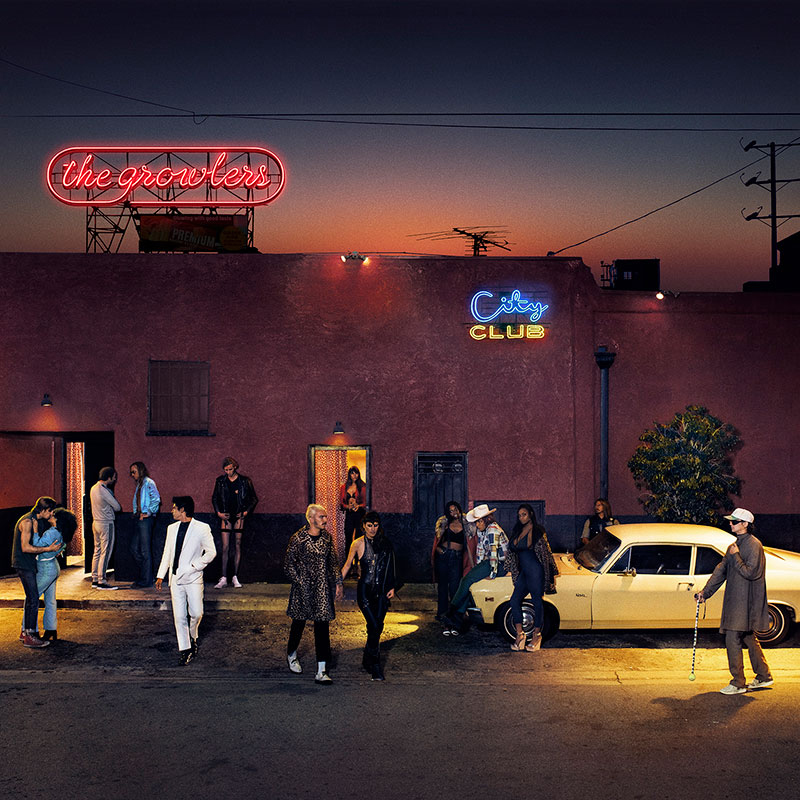 It still feels like new music, doesn’t it? Each new record from The Growlers has something gripping enough that makes it as exciting as a debut. The Growlers swooned us back in 2013 with “One Million Lovers” and Gilded Pleasures, those “Humdrum Blues” with Hung At Heart, and then, within the more recent couple of years, that magnificently depressing “Good Advice” on Chinese Fountain. We’ve been seeing The Growlers for a while now, and we know all their tricks: bashful love songs softly cradled by opiate-euphoria, kick-shit pub songs aggravated by rum and amphetamines, and, of course, how genuinely they’ve always related to the everyday man when the going gets tough. But something has been different with The Growlers lately. They’ve been coming home later at night smelling like cheap perfume and whiskey with a slick new Members Only jacket, and they’re not caressing our needs as much anymore. At this point, they know how obsessed with them we’ve become, and they don’t feel obligated to fill our every need. Now, they’ve decided they’re going to do what they want to do. They’re going to stay out and drink for however long they want. They’re going to pick up new moods and scents even if you don’t like them. They’re going to flirt with something new if it fancies them, and they’re going to turn up their fuzz and synthesizers however fucking loudly they want.

You knew this when they came through the door a few weeks ago with “City Club” and realized who they’ve been hanging out with. Julian Casablancas of The Strokes produced the new album for the boys and have helped them out with a new, slick, New York–esque style. Sounds off this record spawn in the hours of the late night, and there is a more cock-out attitude, distant from what we’ve been used to since our affair began with The Growlers. But in the middle of all this late-night musk and confusion, they revive our faith with “When You Were Made” and let us know that that old sweetheart singing us those affectionate songs is still in there. It still makes us think: That sounded like my beloved Growlers, but everything else has changed. Is this just a phase? Moving through “Rubber & Bone” and hopping over “The Daisy Chain,” we end up in “World Unglued,” and it starts to make sense. Here, these new moods and swings start to come together with those old favorite sentiments. It’s still our one, true love, The Growlers—they just need room to try on new garbs and taste new, dark subject matter. And with this, it’s all right. We let them follow with venting about “another bar fight in a neon light” and “high-ass women who don’t see me” in “Neverending Line”—all the shit they’ve had to put up with as a touring rock band.

After talking, tears and a few tall drinks, The Growlers drive us home with “Blood of a Mutt” and “Speed Living”—two tracks that remind us of that band we fell in love with back in high school that still satisfyingly cap the night with their cool, new swagger. This is definitely a record that’s going to challenge some of The Growlers’ wholehearted fans, but others will enjoy the new sleek style that’s brought on by late-night antics and a craving for danger that can only be settled by exploring new scenes and avenues. –Austin Doty