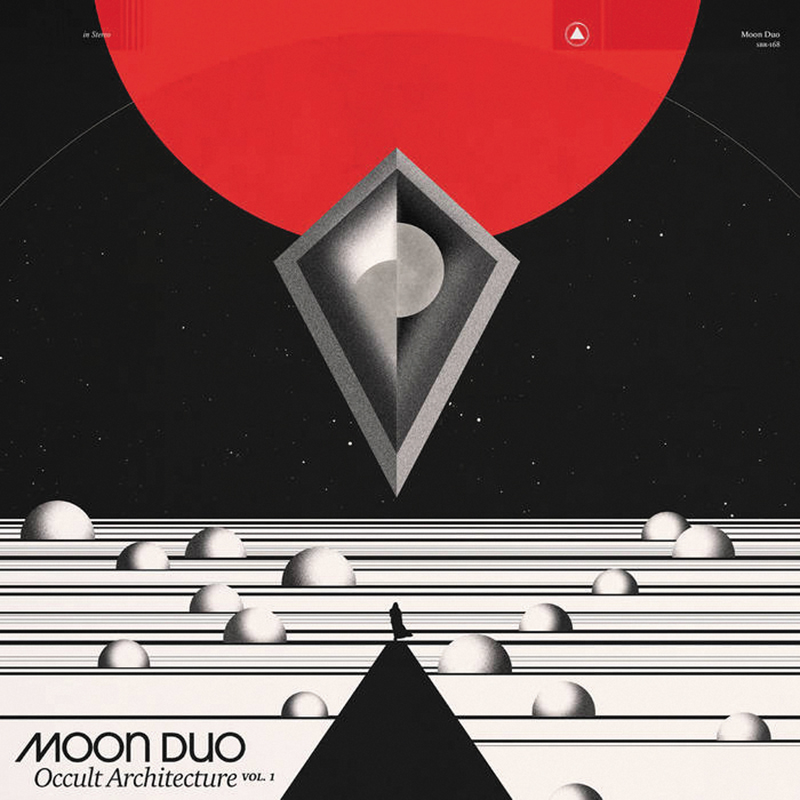 This first release of two volumes, which will be catalogued together as Moon Duo’s fourth record, takes on the yin of Chinese philosophy—the yang to be taken care of in Vol. 2. Roughly translating to “the shady side of the hill,” the yin in Vol. 1 is used as a vessel to take on a more grim subject matter, moving through night and dark, bumping into indefinite ideas about how vague and black the world can be. This is all according to the duo themselves, Ripley Johnson and Sanae Yamada. They found themselves in the darkness of a Portland winter at the start of making Occult Architecture, and they thought it would only make sense to evolve this record as winter to spring, night to day, dark to light—yin to yang.

Pigeonholing themselves in the genre of what they call “repeat-o rock” (their incessant repetition and uncompromising loop of riffs provide a cadence that was probably first attributed to punk legends Suicide), they surface their dark contemplations, starting off with “The Death Set.” Setting the stage for rest of the record’s ambience, the track contains relentless, fuzzed-out guitar, a beat you can coolly nod your head back and forth to, synths attacking from all directions and soft yet demented, gospel-like vocals that keep you in tune with the evolution taking place. “Cold Fear” and “Will of the Devil” bring on more of the same, allowing the band to flex their commitment and show that if something gets stuck in their heads, it won’t be over for at least another five minutes. But it’s when we get to “Creepin’” that that perspective shifts and, listening to it, you feel like you could be on some coastal highway, zipping along the beach in a convertible. Ironically, given the dark tones and discrepancy of light within the rest of the album, this will probably be the composition that sticks with you come the end of the album. However, I might only think that because we are in the dead of winter, and I could really use a beach. “Cross-Town Fade” and “Cult of Moloch” are great tracks that alleviate the bite from a cold breeze; the former surfaces old-school drum machines that complement the playful synthesizers, which might sound familiar if you’re into the Brooklyn art project Japanther. The latter, however, elevates the band to their most tenacious mode, demonstrating a duel of two soloing guitars above the atmosphere of drum machines and blown-out guitars on repeat.

Vol. 1 comes to its conclusion in “White Rose,” pivoting to the yang and sunny skies of Vol. 2. The track channels in with ambient winds, almost like air moving through an indefinite valley, void of time and consequence, until the beat kicks in and you remember that you’re listening to a song. The song itself moves in and out of its gospel—clashing synths and guitar solos—but never lets that beat stop for a second. Not until the ambient winds return after 10 minutes doest it fade away under the stiff breeze, and you’re once again lost. The winds push through the valley, revealing to your mind that they will come again, like all seasons—winter, spring, summer, fall, winter again—and that life is just a repetition of the rotation of earth. Like the beat, the winds fade away and we’re back from the void, but it’s the moment that this record ends when we understand that a good life isn’t a lack of repetition, but rather, an excess of variation out of which we can fade in and out. –Austin Doty