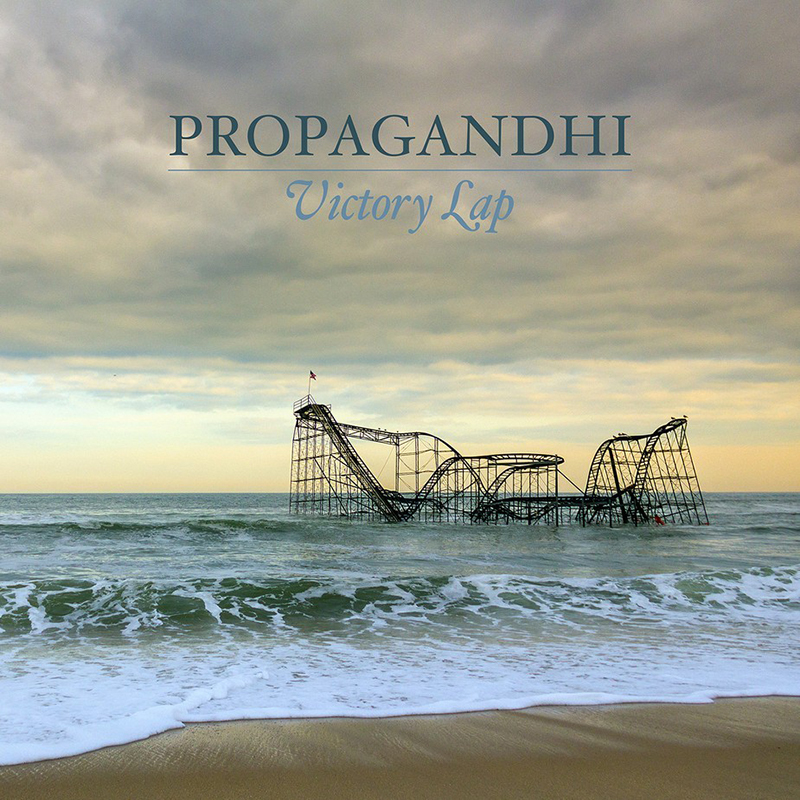 You never know how much you need a record, until you need a record. Turns out, I needed Propagandhi’s Victory Lap—their first full-length since the five-year-old, and phenomenal, Failed States. This point of recognition didn’t come during the impeccable playing or spot-on ascerbic lyrics of the first 11 tracks, although I found them compelling—but at 3:14 in the final track, “Adventures in Zoochosis.” Propagandhi have a way of expressing through music what you feel, but can’t verbalize.

Chris Hannah and I most likely only have a few things in common, but one is that we are both fathers. In “Adventures in Zoochosis,” he encapsulates fears and thoughts I’m sure many in the same situation haven’t expressed, but recognize. The song opens with the sounds of children playing, interspersed with vile quotes from the current commander-in-chief. The song’s premise is about the futility of fighting the cage we find ourselves in—that maybe we’ve even grown to like it—but we’ll be damned if we set our children up for the same fate. At 3:14, he sings, “The sad truth is, this enclosure is where your old man belongs / But you, your hearts are pure / When the operating conditioners come to break you in / I’ll sink my squandered teeth / You grab your little brother’s hand / Run like the wind / And if I’m not there, don’t look back / Just go.”

As someone who grew up listening to punk rock, hardcore and metal, finding solace in its admonishment of “the man” and now realizing I am well into being an adult, these lyrics held the gravity of a black hole. They simultaneously balance this sorrowful admission and the beauty of an unconditional love for children. This balance is present not only in this song, but throughout Victory Lap. There is an undercurrent of rage, sorrow and despair in Propagandhi’s music, but it’s clear their motivation is from a place of idealism and capital-R Rock.

From early on in their career, Propagandhi balanced anarchist topics, feminism, animal rights and other leftist politics with a sense of humor. These components are all still there, but have the benefit of wisdom and age at play as well. Their sound has matured over the years, the riffs are denser, the time signatures robust. But those early elements are still present, which is why this works. The last thing the world needs is another overwrought, 100-percent-serious-all-the-time political discussion. That’s what Twitter is for.

The chorus in “Tartuffle” proclaims, “We came here to rock / Single moms to the front / Deadbeat dads to the back.” Feminism, humor and riffs all coalesce into the delicate balance that few bands other than Propagandhi can pull off. “Victory Lap” is a blast, the most thrash metal Propagandhi track I can recall, and “Lower Order (A Good Laugh)” is an unflinching look at animal cruelty, but sung in a disorienting jubilant manner. Less capable hands would unquestionably fumble these—good thing we have Propagandhi.

The production and execution on Victory Lap is without flaw. These are talented musicians, and the newest band member, Sulynn Hago, shreds. It’s not often that a band in its third decade isn’t coasting, but rather continues to push the envelope. Victory Lap is a tongue-in-cheek album title, signified on the album cover by its placement over a flooded amusement park lost to the ocean. It also is a victory for Propagandhi. Their catalog is excellent, but the past four albums, beginning with Potemkin City Limits, showcase a band continuing to push themselves. As a listener, it’s up to us to push ourselves to get out of this cage. –Peter Fryer