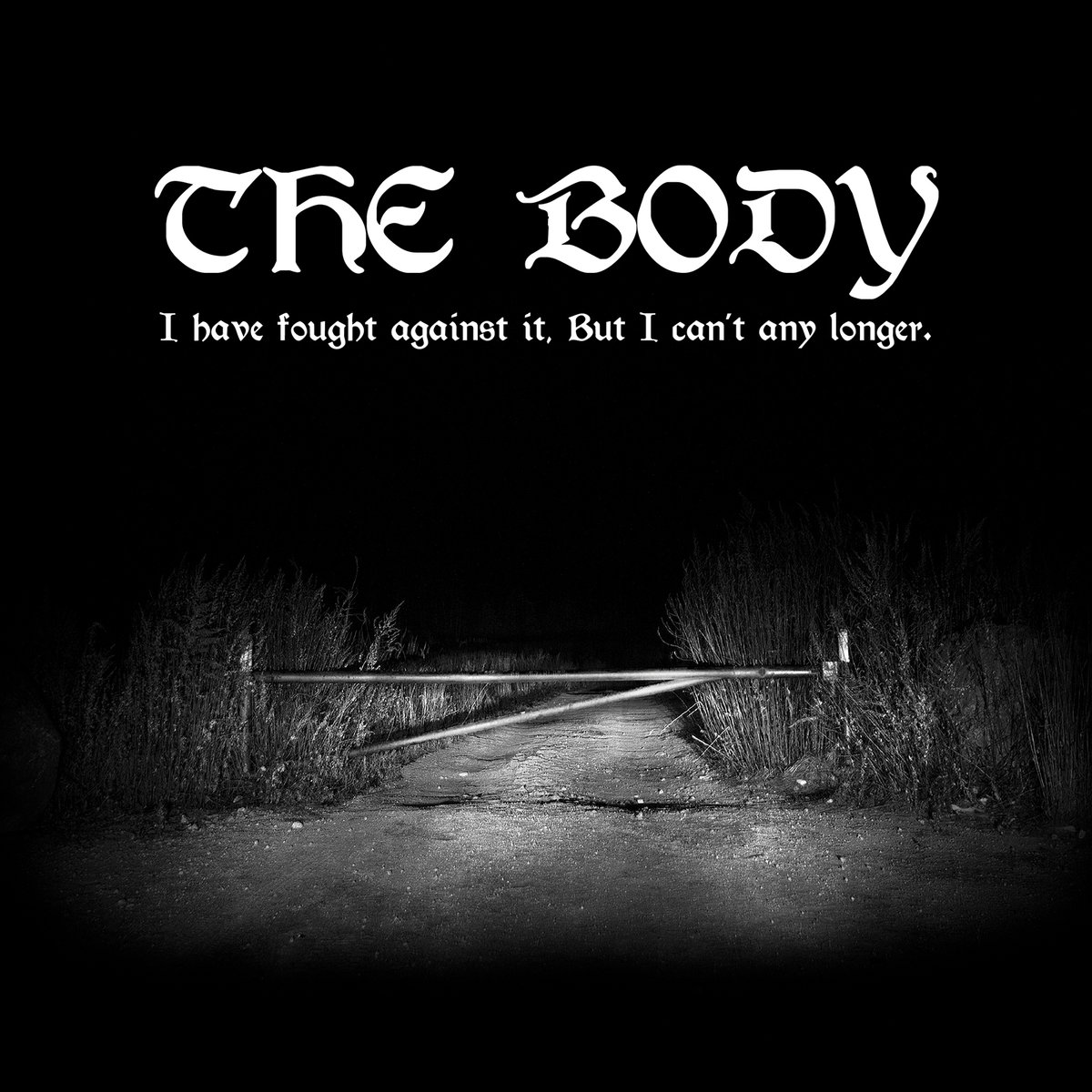 The Body | I Have Fought Against It, But I Can’t Any Longer | Thrill Jockey Records

Review: The Body – I Have Fought Against It, But I Can’t Any Longer

The Body
I Have Fought Against It, But I Can’t Any Longer

The latest album by Providence, Rhode Island’s The Body is yet another addition to a growing sub-genre of heavy music. While many far wiser than I might refer to I Have Fought Against It as a paradigmatic example of post-rock or ambient metal, I prefer to call it “cinematic metal.” Though clunky, academic and pretentious, this name seems less derogatory and dismissive than “soundtrack metal.” Certainly, it sounds less ridiculous than “cinemetal,” which, to my ear, can’t help but conjure thoughts of 880-calorie franchise-manufactured pastries.

The album’s opening track, “The Last Form of Loving,” begins with a somber and austere duo of violins, evocative of some adagio by the late Beethoven or Bartók. In time, these strains are replaced by guest Chrissy Wolpert, her solo female voice a sweet and clear alto, rich with emotive vibrato. This sounds lovely enough, and indeed it is. But the mood is underlain with a sense of impending menace provided by chirring industrial-style synthesizers or percussion—the production leaves this matter deliberately ambiguous. If Joni Mitchell’s The Hissing of Summer Lawns brilliantly captured suburban malaise in the sound of automated sprinkler systems, The Body zooms in until they appear to be water cannons. Another morning cigarette becomes a household inferno. Through cinematic and studio effects—extreme closeups, sudden shifts of focus, deliberate blurring and scratching, massive distortions, gated and triggered effects intended to warp time and space—The Body transports us to the world of David Lynch.

While other cinematic acts, such as Earth, have tended to produce wide-open sounds to accompany nonexistent spaghetti westerns, The Body’s latest, by contrast, offers a kind of musical claustrophobia analogous to the uncanny—familiar but weirdly sinister—atmosphere of Lost Highway. Here, home is not a haven but rather the creepiest place on Earth. And yet, you continue to live there, at your own peril, to your own horror, and for God knows what fucking reason.

There are two fundamental qualities typify the whole of I Have Fought Against It. The first is sudden and unmotivated jumps. The second is constant refrain. A fair example of the former is the way the undeniably pretty vocals of “Last Form” immediately turned through howls and screams so distorted that one can scarcely determine if they proceed from a human maw, the world’s shittiest fuzz guitar or a wedding ring thrown into a microwave oven. As the album proceeds, more unexpected voices (Kate Bush in full banshee regalia? Lee Scratch Perry rub-a-dubbing? An anonymous crisis hotline caller?) and musical instruments (horns, pianos, kazoos, trash compactors) are violently yoked together, producing what I can only call a musical exquisite corpse, a radical hybrid of body parts and drawing styles equally likely to produce laughter, disgust or lust—and perhaps all at once. Surrealist poet Andre Breton, in order to capture such an unnatural image’s power of shock and seduction, found himself forced to borrow a famous phrase from literary madman Comte de Lautréamont’s notorious novel Les Chants de Maldoror: “as beautiful as the chance encounter of a sewing machine and an umbrella on a dissecting table.”

The other formal device structuring “I Have Fought Against It” is relentless refrain. Indeed, so often to the same chords and melodies and scream reappear that it become hard to know whether or not the album is set on repeat. This sort of ritornello ad nauseam, so characteristic typical the baroque concerto—as well as bourgeois high opera—is a musical vehicle for compulsive behaviors and dangerous emotions too great to be contained within domestic space. This is music bursting at the seams, recording on the verge of a nervous breakdown.

While the previous observations may seem a harsh critique, I can only the reply the most exquisite pleasure are seldom, if ever, natural. The Body may, however, be a taste some will be willing to acquire. To alter another famous passage from Lautremont: “Few shall savor this Cinnabon with impunity.” –Brian Kubarycz