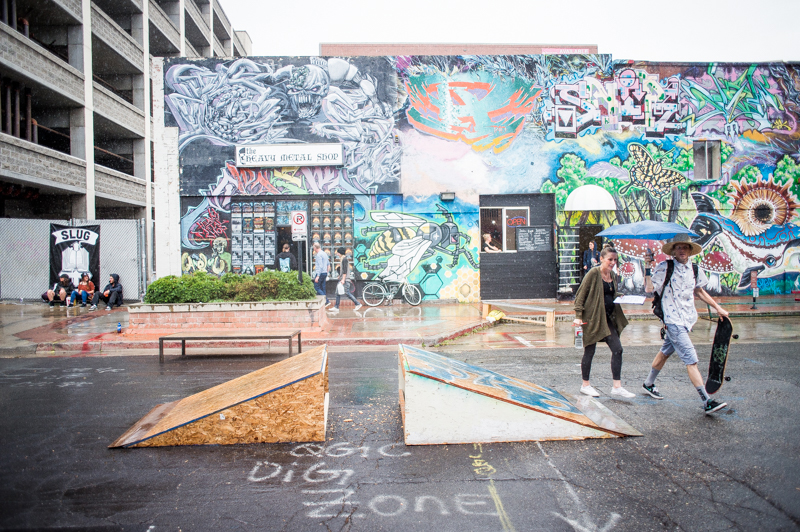 Contest judge Ashley Bloxham gets a helping hand out of the rain. Photo: Niels Jensen

17th Annual Summer of Death Skate Contest Presented By Half and Half Skate Shop and...

Skateboarders all across the 801 hoarded onto the street in front of Half and Half Skate and Snow Shop in Salt Lake City on June 11th to compete in the 17th Annual Summer of Death Skate Contest Presented By Half and Half Skate Shop and Monster Energy. A display of some legitimate features were placed properly down the street for the skaters to throw some decent shit off of them. Man oh man, let’s just say that the weather did not put a damper on our moods this weekend.

Exchange Place echoed from rippers stomping shit on features such as a bank-to-bank, a couple of quarter pipes, benches, ledges and even a Gatorade ramp that was placed at the DIY spot by Fairmont Skatepark that recently was taken down. Let’s not forget about the handcrafted, close-out bump feature that the MC himself, Half and Half owner Milhouse, had manufactured day of for the contestants. This year’s first chapter of the Summer of Death contest branched into two divisions: a 17 and under division and an open division. Needless to say, what we witnessed throughout both divisions’ heats were people there to skate hard and have a kickass time.

The younger division stormed out first and threw down on the features. Youngblood Marshall Larsen landed a 50-50 on the bench and got some air over the bank-to-bank, earning his slot at Third Place. Kaleb Van Niel stomped a buttery noseslide shove-it off the bench, and he also planted a clean, half-cab noseslide on the same feature, earning him the spot for Second Place. The winner of the 17 and under division was Kai Taylor, who threw a fat front 180 off the ramp over the bench and effortlessly made a 50-50 front 180 out off the ledge. There was also a properly planted trick from Tyler Sim, who put in work and finally stomped a three shove-it off of the side of the bank.

Luckily, the weather held off on us until the last heat of the open division. Throughout this whole division, everywhere you looked on the course, hammers were being dropped left and right. The skaters put in heavy work on these features. Skateboarders such as Dino Porobic, who got some decent air with a nose grab off the close out bump and hucked a sweet frontside 180 over the bench, snagged Third Place. Garrison Conklin put in some serious attempts to finally lock down a hippie jump backside 180 over the sweet ass feature Milhouse built for us. Conklin also planted a backside 180 switch 50-50 on the bench and secured his spot for Second Place. Last, but surely not the least, Deng Tear put in some work on the course, throwing a fat-ass backside 360 off of the close-out bump feature, a backside late flip off the ramp and over the bench, literally tearing shit up on every other feature and earning First Place at this year’s Summer of Death.

Milhouse kept the hospitality flowing even after someone tried to come in and steal some contestants’ boards. Milhouse still then kept the party flowing with help from all his homies, even with rain, which made every feature five times sketchier. That didn’t stop Coltyn Nelson from earning the best trick award by planting a double tre flip over the bench. It was fucking tight.

After the contest, we all crammed into Half and Half to give out the awards, where the winners were given some awesome merch and skate decks made by Afterdark Skateboards owner Mark Judd.

That wraps it up for another successful year! SLUG would like to extend their gratitude to all the awesome sponsors who made the 17th Annual Summer of Death possible: Half and Half Skate Shop, Monster Energy, 3 Pyramids Clothing, After Dark Skateboards, Board of Provo, Blue Plate Diner, Graywhale, Heavy Metal Shop, Milosport and Saga Outerwear. Plus, SLUG extends a huge shout out to all the judges and to everyone who helped make this year’s contest as kickass as it was. See you all for some sweetened shenanigans at the next installment of Summer of Death.

Scroll over images for full-size photos and captions.