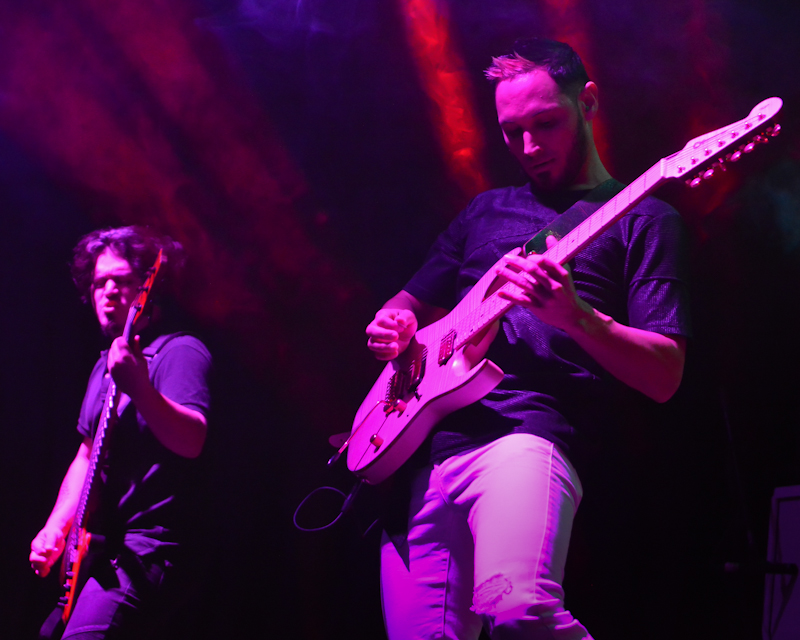 On Nov. 29, the Guitar Collective Tour came to The Metro in Salt Lake City, featuring guitar gods Angel Vivaldi, Chris Letchford (with his band Scale the Summit) and the UK’s Andy James. The evening’s music had everything from drawn-out melodic progressions to face-melting shredding, with all three guitarists complementing and contrasting each other with their own individual styles.

Local metal band Machines of Man opened the show with a mix of melodic vocals and screams, heavy guitar riffs and driving drums over a smattering of unconventional time signatures—far more thoughtful than a lot of American hardcore–influenced bands. I really enjoyed their set and will be going to see them again, for sure!

Andy James is on the tour without band support, so he gets up on the stage and burns the place down with all other parts pre-recorded. There are different types of guitar heroes, and Andy James is not the showman-type. James stays relatively static and stoically unleashes his seven-stringed ESP while glaring out into the crowd beneath his signature black beanie. James played a good portion of his new album, Exodus, which is full of fast-paced picking and tapping that’s counterbalanced by choruses full of drawn-out, emotional riffs. I know I’m not alone in saying that it would be great to see him in 2018 with a full band and a longer set.

Scale the Summit was a big change, playing through complex rhythms and keys while guitarist Chris Letchford and bassist Kilian Duarte‘s contrasting playing styles kept the audience’s eyes roving. The band utilized a projector screen to back their songs with abstract video imagery (which also made shooting photos of the band nearly impossible). As a prog-rock outfit, their playing isn’t as much about how many notes can be fit into a bar; a lot of time changes and clever riffs abounded.

Angel Vivaldi was the final musician, and he started his set by playing an old Michael Jackson song, with appropriately choreographed dancing. As a longtime fan of his, I can honestly say that he is better live than his studio recordings—more so in that you can’t see him playing when you’re listening to the lightning fast “An Erisian Autumn”—it’s something that has to be witnessed. He puts his entire being into every single song, regardless of audience size. His performance is fantastic, and you know he’s having fun when he gets a quick manicure while still maintaining a melody. They ended the night with Andy James taking the stage with Vivaldi to play their new collaborative song, “Waves of Synergy,” with Letchford also joining in for a performance that’s reminiscent of the legendary original G3 Tour with Satriani, Vai & Johnson.