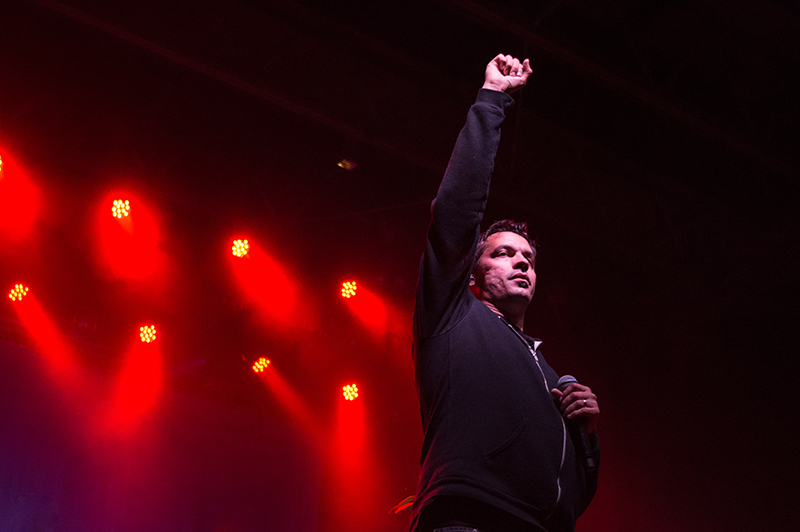 Slug raises his fist above the crowd, starting off another song with a salute. Photo: ColtonMarsalaPhotography.com

For as long as I can remember, Atmosphere have been rocking the Salt Lake City music scene with innovative hip-hop beats. Friday night’s concert at The Complex was just one of many stops on the Freshwater Fly Fishermen Tour, which celebrates their new release, Fishing Blues. This 18-song album features artists such as deM atlaS, The Grouch and Kim Manning, among many other likeminded artists. Leading up to the concert, a crowd of all ages gathered outside The Complex. One by one, fans quickly made their way to the front of the stage to grab a good spot to take in the show. Many of those of legal age were able to chill in the 21 and over bar, watching the performance from multiple live-feed TVs.

The first act Friday night’s performance was deM atlaS, a fellow native of Minnesota. His performance filled the crowd with energy and good vibes during the dynamic opening set. “All We Got” was definitely one of my favorites songs to experience from his album DWNR. Although he’s relatively new to the rap music scene, deM atlaS brought his own flavor to The Complex, giving the crowd the perfect start to an exciting night of hip-hop.

Brother Ali, next on the lineup, attracted many loyal fans to this September evening’s concert. Ali’s history of playing Salt Lake has created a wide set of dedicated people who follow the rapper’s expressive, poetic music. “Truth Is,” an ode to honesty, had the entire room singing along. Ali’s conscious slam poetry, featuring his son, expressed deep emotions about current events involving police brutality and the impact that these altercations have on the entire community. Brother Ali’s finale brought the energy in the room to a new level, building the foundation for Atmosphere’s upcoming performance.

Finally, Salt Lake fans welcomed Atmosphere to the stage, with Slug, Ant and Plain Ole Bill, who opened with “Like a Fire,” a new song off of the recently released Fishing Blues. However, even with the novelty of his new album, Atmosphere’s set consisted of many well-known classics such as “Puppets,” “Shoulda Known” and “Say Hey There.” For as many years as I have been attending Atmosphere concerts, my opinion is that Atmosphere’s voice, much like a fine wine or bourbon, has only improved with age. Dating back to 1989, Atmosphere has been producing music and bringing it to hip-hop lovers in the Salt Lake community. His loyalty to Utah fans has built a broad community that continues to love and support the musical sounds and witty lyrics of Atmosphere, seen in the large turnout at The Complex on Friday night.