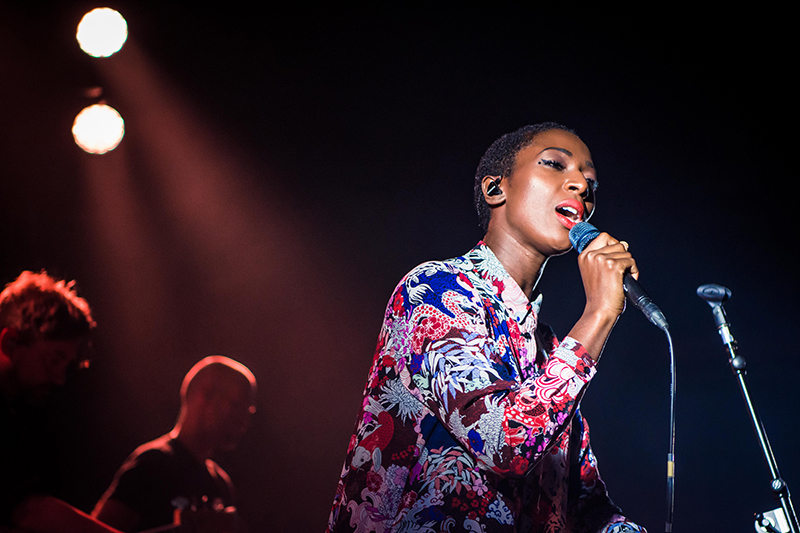 There’s a weight to the expectation of a live show with Simon Green’s group Bonobo. With international acclaim for his unique and world-aware music, it’s not exactly a stretch of the imagination to picture the same show being played on the shores of Ibiza or under the skyline of Prague or Istanbul. To see talent on this level in Salt Lake City is exciting, to put it mildly. A rotating crew of musicians onstage with him gave a solid organic feeling to the ordinarily solitary, digital genre of music. Green himself had a synthesizer, a guitar and an electronic drum kit surrounding him centerstage, and as the show progressed, he cycled through them extensively. His crew was spread across the stage in all black, bringing instruments that ranged from keyboards to saxophone to drums and even a flute and clarinet.

But it wasn’t the extensive number of instruments that made the show. It was the sheer variety in tone that kept the vibe feeling fresh throughout. With only a few slight embellishments to the way the songs were recorded in their discography, the group swung confidently between professional house and club to an earthy ambient sway without pause. Each note was both perfectly in tune with the beat and yet just outside of it, something not entirely specific to the band’s own style, dominating the body and persuading it to sway or dance, the way one used to with the rituals of a less skeptical world. It feels prenatal and ahead of its time simultaneously.

One way the music was noticeably cradled in the modern age was with the light show. In complete harmony with the set list, the crowd found itself bathed in a tropical, volcanic river as the spotlights made the walls themselves glow with heat before the next song began and transitioned to a deep purple and blue microscopic skin that seemed to cover a beating heart. The spotlights pulsed and swayed, interconnected, as the band moved from hard techno and industrial to a glittering visualization of a rain stick sputtering saffron and flames. There was enough variety in the visuals that it was consistently grabbing my attention instead of playing a back-burner role of maintaining a sense of movement on stage.

One of the real pleasures of the show was seeing the singer Szjerdene step in front of the band onstage and hypnotize the entirety of the venue with a voice that conjured images of a wet, primordial Earth and giving audial substance to the images connected to the band’s latest album, Migration, where deep, colorful plumes of smoke sit disconnected above varying desert rock. Szjerdene hit all the markers. Her range seemed infinite, and the emotional trail she carried in the melody’s progression never rushed its course or stopped too sharply. It glided outwards and drew attention in to her. While most of the band stood mostly still, Szjerdene let her hands drift around her, eyes closed, as if giving the sound waves a last little brush before they escaped and disappeared in space. She seemed the embodiment of spirit, something of a motif for the band. One of the great attributes of Bonobo is its embrace for the world in totality. The music draws from every corner of the Earth and at all moments seems to be in the process of capturing the way a soul would sound if it were capable of doing so. From up on stage, using as many mediums as can comfortably fit within a moment without becoming crowded, Bonobo breathed out and into the venue what can only be described as a beautiful re-creation of what life can be found breathing out into the world as a whole. And we saw it here in Salt Lake City. –@myster_patchouly