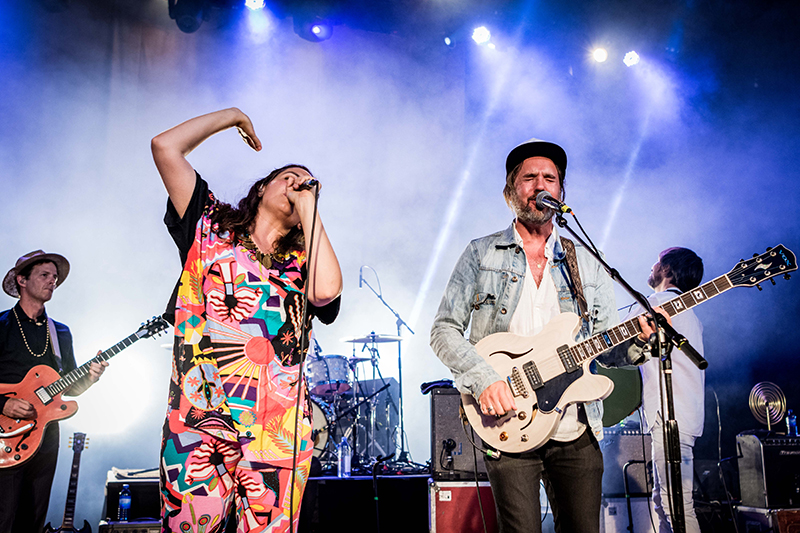 Sitting on the second level of UTA’s Front Runner, Twilight fans enjoyed a stress free commute to Ogden. The 50 minute-long ride was a great place to chat with friends, surf the web, or take a quick nap. Four blocks from the amphitheater, the journey from the Ogden train station to the venue was filled with awesome bars, local restaurants and old, historical architecture. The historic 25th Street has been a transforming, up-and-coming area to hang out in. As fans flocked in, the clouds in the sky gathered, building up to an eventful night.

Local legend Joshua James started the evening off right. Music lovers sat on the green grass, hanging with friends and family. RYE SLC brought their delicious mac and cheese and Graywhale Entertainment was selling some awesome merch for all of the bands. In Tall Buildings is a band hailing from Chicago, Illinois. Celebrating the release of Akinetic, the band has been touring with Broken Social Scene over the last few dates. The sky darkened, but the air remained hot as a storm began to set in.

As the sun faded in the night sky, Broken Social Scene joined the stage. Opening with “KC Accidental” off their album You Forgot It in People, the large band started off with a bang. Playing awesome tunes like “Texico” and “Hugs of Thunder,” they performed an awesome show. Lightning struck in the distance as the band began the first melodic notes of “The Sweetest Kill.” Reaching the first verse that sings “I thought you were the sweetest kill …” Kevin Drew stopped singing and began discussing the approaching storm. He continued to sing, but was soon stopped by local law enforcement and forced to delay the show. Fans streamed out of the venue and into the streets of Ogden, hoping to return 20 minutes later. Unfortunately, the show was canceled because of the threat of lightning. Instead, we hung out at Brewski’s, eating pizza and drinking cold beer. The storm seemed to come close, but never close enough to feel like a threat. There was a melancholic tone to the night initially, but fans gathered in their joint sadness and enjoyed the night with Broken Social Scene’s company at Brewski’s late into the night.