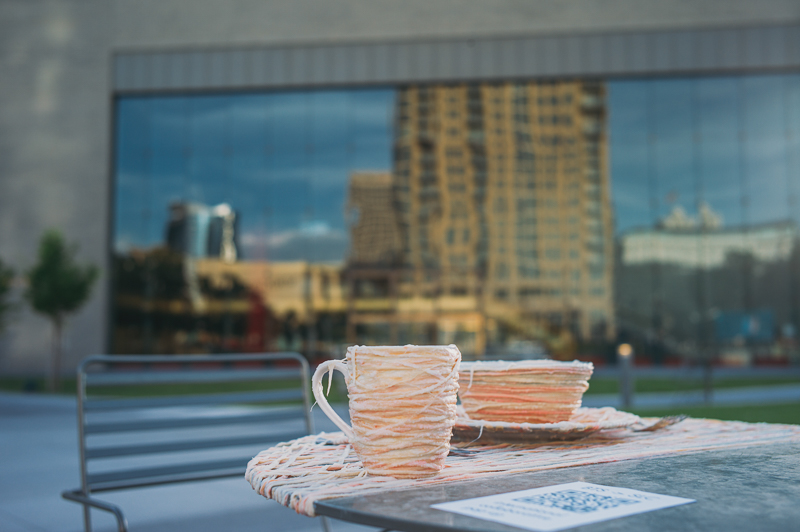 A passerby would find the piece 'Mästo' by Lily Shafer & Andrea Kopecka to be somewhat incongruous with its environment—dishes covered in chewed gum sitting in the square in front of Abravanel Hall.

In what must surely be a first, Utah joined artistic forces with Bratislava, Slovakia to create a pop-up art show that crosses traditional boundaries of display, time, language and culture. Pieces could be found throughout Downtown SLC, though they were slightly difficult to spot even with map in hand, creating a scavenger-hunt type atmosphere for art seekers.

The idea is that while SLC was hosting its own show, a simultaneous show was occurring in Bratislava—linking two seemingly unaffiliated entities through the power of aesthetic expression.

Tenacious attendees were rewarded with viewings of guerrilla urban installations in a variety of mediums. Within one stop, attendees were greeted with a piece by Nathan Krishnan (SLC) and Rita Koszorus (Slovakia), featuring alaptop repeating a multifaceted and emotional stream of consciousness over visuals and music. Another by Nancy Rivera (SLC) and Diana Garafova (Bratislava) made the viewer a participant in creating a human sundial. All the pieces elicited long stares and many questions—which is exactly what good art should do.