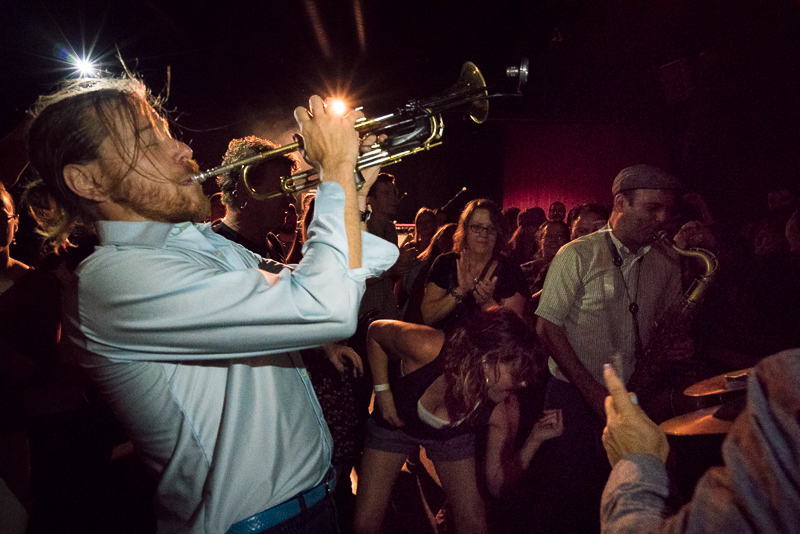 Another fantastic musical night at the State Room ended on a high note (pun intended) after The California Honeydrops came to the dance floor and dance and jammed with the audience. Photo: JoSavagePhotography.com

The California Honeydrops @ The State Room 09.19

I was one sweaty photographer at The California Honeydrops’ Monday night show at The State Room. Not a well-known event occurring in Salt Lake, there was plenty of space on the dance floor, and the happy Honeydrops had everyone dancing.

The Honeydrops’ homebase is in Oakland, California, and Salt Lake was the last stop on their tour.  I saw them this June in Santa Barbara, California, and for that reason, I knew this obscurely known event in Salt Lake, needed coverage.

The California Honeydrops describe themselves as “Bay Area R&B, funk, Southern soul, Delta blues and New Orleans second-line.” These guys ooze soul and funk. The combination of singer Lech Wierzynski’s voice that has a sweet honey sound, and his protruding happiness, positivity and desire to reach his audience is likened to the one and only Stevie Wonder—a likeness I would not draw lightly.

They played two sets at The State Room, and after the first, it was hard to believe that I, or anyone else, would possibly have anymore sweat to give the next round. But with music like that, the sweat just beads up. Wierzynski’s voice is so unbelievably silky it seems like all he must do is sip honey tea all day, every day. Their lyrics are relatable and humorous, and can carry a meaningful message with an optimistic delivery and, at times, incite crowd interaction.

Keys player Lorenzo Loera and saxophonist Johnny Bones had their soulful solos on the regular, and at times, it felt like an amazingly excellent living-room jam session between five guys who really enjoy jamming together—and just happen to be extremely talented. Beau Bradbury smiled and grooved while funkily slappin’ the bass.

After the audience and band returned from a break to the second set, a few songs later, Lech spoke to the audience. He used his platform to reach people, and his message began with the Black Lives Matter movement, followed by the Honeydrops’ song, “Long Way, which goes, “I know we’ve come a long way / Still got a long way to go / Walking in the shoes of another / Learning what we don’t want to know / I know we could do bette r/ But we sure won’t if we are too proud to try.”

Thank you, Honeydrops, for the amazing music and the meaning that moves my soul in euphonic ways that most music this day and age can’t attain. I want to thank any artist who uses their platform to send a message. If they reach one person or affirm another, that is a job well done.

Drummer and vocalist Ben Malament did an outstanding washboard solo while singing ““(I Need A) Big Fat Woman,” which had the crowd interacting, laughing, smiling and dancing in good humor.

The California Honeydrops then proceeded to descend the stage. The overjoyed audience danced with and around them in a celebratory fashion as they jammed their instruments. The sweat and soul poured out of everyone in the room.

If only the music could be heard while looking at the photos—actually, it can! The California Honeydrops have all their albums available for free listening on their website, cahoneydrops.com/music.