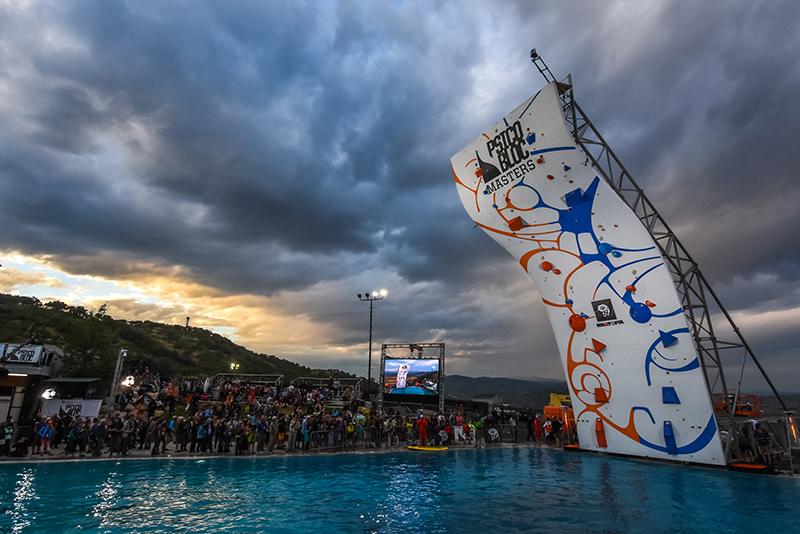 The 2016 finals for the Psicobloc Masters Presented by Mountain Hardware (pronounced seek-a-block) were held at the Utah Olympic Park on Aug. 5. A local Salt Lake climber, 21-year-old Jules Jimreivat, had the lowdown on the event, offering a great taste of the enthusiasm that the competitors have for this new climbing discipline: “This event is a 55-foot wall, which is not special, but it is over a deep pool, so we’re ‘deep water soloing’—we’re not using a rope, so we are taking some big falls today. … I was really nervous the first time I got on the wall. I thought I was going to be too scared to try hard, but it was way more fun than it was scary, and the adrenaline rush is huge.”

The premise of Psicobloc stems from the practice of “deep water soloing,” which sees climbers tackling natural routes over water that is deep enough to take a high fall into. Of course, in the natural environment, the climber must scout the water thoroughly for rocks and other hidden obstacles lurking below the surface beneath their intended route. Many climbers have been able to utilize stand-up paddle boards and other small personal water implements to reach and claim previously unimagined ascents.

Formatted as a single-elimination, head-to-head tournament, climbers could advance by climbing higher or getting to the top first. Obviously, if you fall off of the wall before reaching the top, your chances of winning are pretty slim. It’s also worth noting that the first rounds of the event were power protection paired, to keep the higher seeded athletes in the competition longer. The contest saw very few climbers fall from the wall before reaching their objective.

Weather threatened the finals by gracing us with a little rain, which was promptly mediated by hand towel. “The part of the wall that is currently looking wet is actually the hardest part,” said Josh Muller (a lifetime climber and frequent competitor of other disciplines), but he was only mildly concerned, if at all. As the competition wore on, slippage didn’t seem to be a serious issue. Muller was unfortunately eliminated in the early rounds, as was the famed Chris Sharma, who had a huge hand in bringing this brand of climbing to its current popularity.

Mikaela Keirsch and Sidney Trinidad were paired for the final round of the Women’s Competition, which saw them both tearing up the wall. Matched quite evenly for the majority of the fourth run up the wall, Keirsch proved her supremacy and topped out first, with Trinidad close in tow. Keirsch was also just one of a handful of competitors who opted to use the available downclimbing holds to decrease her plummet by roughly 15 feet, for which the announcer hounded her each round. It was upsetting to hear boos from spectators at her refusal to jump off the top of the wall, begging the question, how much respect does the public really have for extreme sports athletes? When asked by the announcer what she was going to do with her winnings, Keirsch answered, “I’m going to pay my college tuition.” Seemingly tactical in all respects, Keirsch was hard to shake—expect to hear her name again.

The route on the wall was modified before the men’s contest to decrease the number of holds available to the climbers, requiring higher risk,”bigger” moves, and also seemingly slowing down the climbers’ progress. In the Men’s Final, Nathaniel Coleman was pitted against Jan Hojer in a real nailbiter that had the crowd on their feet. Hojer set the pace of the race, while Coleman showed surges of speed that ultimately saw him off the wall when he missed the final hold in a desperately fast and long reach.

Beyond the actual competition, the additional entertainment at Psicobloc was plenty: There were beginner slackline setups, multiple food options, Uinta Brewery selection and a highline walker (a user of a slackline at considerable height), as well as aerials performed by U.S. ski team members on the practice ramps into the pool.

Ultimately, this was a wonderful way to spend a Friday evening, and contests for this discipline are only going to become more common. To learn more about this burgeoning competition and view full results, visit facebook.com/psicocomp and psicocomp.com.