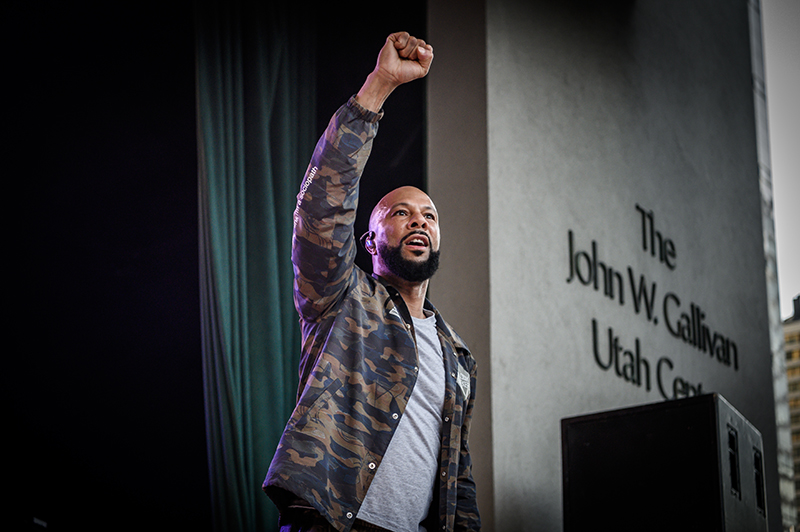 On one of the hottest days in a particularly cool summer, Salt Lake City gathered in the shade of its skyline for a Common concert nestled in the city’s center. Crowds met in Gallivan and in the surrounding restaurants and bars in the area; Good Grammar, a local boutique bar, served up cold beverages to cool us down and Boltcutter provided their unique vegan menu with items like Sin Carne Asada. The show started at an early evening time of 5:00, resulting in a slow trickle across the plaza’s open green space and elevated VIP viewing area. The 21+ area has a wide variety of offerings adult beverages. Food trucks parked around the venue sold yummy treats as everyone got comfortable for the show.

I arrived as local act, House of Lewis, went on; a six man hip-hop production entertained the arena. Hailing from Provo, the group “is a hip-hop collective from Utah. Comprised of four emcees and two DJs, they have released a number of critically acclaimed projects and have done shows with some of hip-hop’s biggest acts.​”​ The Friday afternoon fans sat on the green grass, bathing in the hot sun and generally enjoying life. Up next, Nicole Bus, a vibrant soul that is “charged up by gospel grandiosity, sun-kissed island grooves, and R&B soul.” Her voice combines gentle, empathic grace in her subject material and the powerhouse of a vocal, multi-instrumental genius. Celebrating Roc Nation and beyond, she danced around the stage in an awesome set of pinstripe overalls, bright red lipstick and kickin’ white boots. Her captivating smile and stage presence made it easy to take candid shots and still enjoy the show. She played a favorite, “You,” and as a rising star, she made quite a few new fans, among her current ones.

The space began to fill as the sun set behind the skyline and the summer night began to cool off. Many came sporting their best attire, including many cool Air Jordans. I’m a shoe junkie and definitely enjoyed capturing the joy and love people have for their shoes. The stage was set with a lamp and lounge chair. Common entered the stage and the crowd showed their excitement. He began by sitting in the chair and poetically spoke his words to a captivated crowd. His exuberance on stage showed his happiness to perform in SLC. Through his poetic interludes between songs, he formed a story between the spoken word and vocal melody. My personal favorite was “Testify,” but he also busted out a Real soccer jersey with “COMMON” on the back, showing his appreciation for the local legends. Stoked to celebrate their team and their love for a musician, Salt Lake City showed up, cheered, yelled, danced and generally celebrated together for the Salt City Sounds extravaganza.