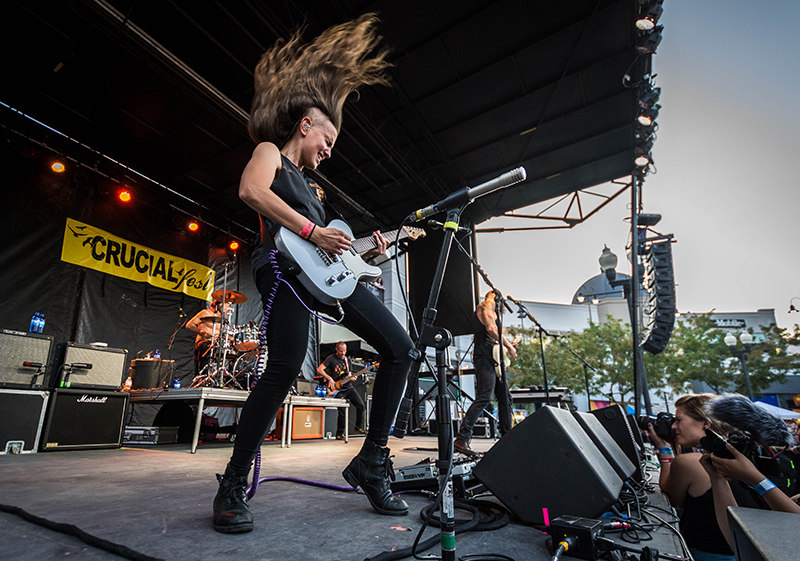 Crucialfest 7 expanded the festival’s breadth of genres, and there was something for everyone. From local heroes to out-of-town music legends, Crucialfest 7 touted a robust lineup. SLUG contributing writer Paige Zuckerman reports on her festival standouts, followed by SLUG photographer Colton Marsala’s photos.

Local post-hardcore band Westing played the Exigent Stage at Crucialfest 7 on Sunday evening at The Gateway. A passionate performance by ardent and energetic frontman Matt Mascarenas (Heartless Breakers, who recently released a new single) took literal and figurative center stage. It was near impossible not to get pulled into his intensity, especially in moments of brief disclosures regarding the current and past life struggles informing the music. The band was awkwardly smashed into the beautiful but acoustically overwhelming hall at the small indoor stage surrounded by white walls, chandeliers and a black-and-white chessboard marble floor. The contemporary glam of the space was an odd yet pleasing counterpoint to Westing’s post-hardcore/screamo sound. Playing the whole of their recent EP, I Haven’t Been Feeling Myself, meant that the small but enthralled audience received a solid taste of pseudo-grunge, semi-hardcore heartbreak anthems with aggressive vocals and a tender underbelly. Westing’s music is rough and angsty yet sometimes melodic and sweet, a tension that seems to translate well onstage as far as sound goes. With exception to their drummer, Mascarenas’ bandmates are somewhat stiff in comparison to his sweaty yet strangely angry-sexy performance.  I would have preferred to hear more tunes from their 2016 catalog as well, however, their recent work is decidedly a departure from the more acoustic ethos of their former releases, so perhaps old songs would have felt somewhat shoehorned into the set. Though oddly fleeting, their CF7 performance proved that Westing are certainly one of the most adept local and loud rock bands.

Seattle indie-rock band Minus The Bear regaled the S&S Stage at Crucialfest 7 with their strong concoction of alternative guitar and electronic influences. Sophisticated time signatures matched nicely with sounds reminiscent of Seattle coffee shops before those shops went global and lost their unique cool. Having had nearly no prior exposure to the band, I listened with beginner’s ears and found myself connecting to the music in unanticipated ways. The band themselves displayed youthful energy and a contemporary feel, especially in considering their tenure in the indie scene. A decently sizable crowd seemed to indicate a proper local following, including a myriad of logo tees and cheering voices when lead vocalist Jake Snyder indicated they’d finally play “that one song” everyone was hoping for. As an outsider, I had no clue what this lauded tune entailed, yet by the end of the set, I was solidly on Minus The Bear’s team and properly glad I had stumbled upon their sound.

Idaho natives Built To Spill served up a solid dose of Woodstock-esque indie rock in a classic, jam-sesh-style set. Vocalist and renowned master guitarist Doug Martsch was at his best making his numerous effects pedals nearly weep for mercy. It would have been little surprise if the specter of Jimi Hendrix had manifested mid-stage to offer Martsch a quick, crisp high-five after several of his wild solos.

The band successfully went about evoking a bygone era with both their sound and cracked, faded, vintage Fender amps. From their live performance, it was clear this band has been around the block with a set that validated their eight-album, 25-year timespan that was subtly stunning in its musicianship. They played several popular songs, yet the struggle of the set was a tendency to blur the lines between them, thus making the numerous electric guitar meanderings feel slightly ceaseless and indistinguishable. The crowd was notably deferent and refreshingly diverse, with many excited and even ecstatic faces mouthing the lyrics to every song and swaying with familiarity. The performance contained nearly no showmanship beyond Martsch’s fast fingers flashing across the frets. The three slightly worn band members with their bald heads and trucker caps appeared as though they’d stumbled out of their garage on a Sunday morning with a splitting, middle-aged hangover. There was nothing to show off other than the music. It was obvious that Built To Spill are simple sonic scientists deftly plying their trade with no explanation or unnecessary preamble, including minimal crowd engagement, yet the audience celebrated their craft nonetheless. –Paige Zuckerman