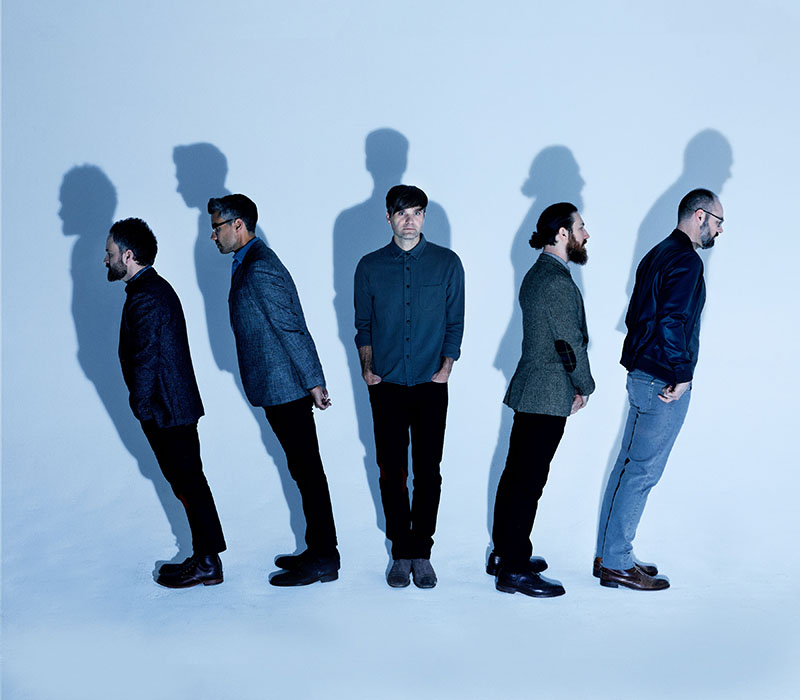 Death Cab for Cutie @ Red Butte 08.04 with Pedro the Lion

Twenty years ago in 1998, a few bands from Bellingham, Washington were lined up to play a local show together. Death Cab For Cutie was meant to headline, but lead artist Ben Gibbard was already exhausted and knew that he had to get up at 5 a.m. the next morning for his day job. He approached David Bazan of Pedro the Lion and asked if the their bands could swap places so that Death Cab could leave earlier. Bazan agreed after a joking “I hate you,” and Death Cab opened for PTL.

Two decades later, the bands are sharing a stage together again. This time, it’s a sold-out, outdoor amphitheater where thousands have flocked with blankets and picnic baskets. But how do rockers ostensibly years past the pinnacle of their fame continue to draw crowds en masse?

The bands remained friends throughout their formative years, both climbing to fame and notoriety in different respects. While PTL developed a cult following in the indie world, Death Cab rose to critical acclaim and wild, mainstream popularity. The common circle in the Venn diagram between the two is their somber content: sex might sell to some, but sad songs can be just as seductive.

Beginning without any introductory banter, PTL plays “Slow and Steady Wins the Race,” a cautionary fairy tale with Cain and Abel–esque brotherly implications. Bleeding without pause into the political, “Indian Summer,” Bazan’s vocals are coarse and unrepentant. His lyricism can be self-deprecating and dark, and it feels as though Bazan is burdened by his own truths. Having publicly fallen away from Christianity mid-career, Bazan doesn’t sugar coat his religious misgivings. In “Magazine,” he sings, “And I feel the darkness growing stronger / As you cram light down my throat / And how does that work out for you / In your holy quest to be above reproach?” These anti-sermons seem fit for a small congregation rather than a large venue, but the words still manage to send a chill. PTL’s set ends with, “Second Best,” a heavy and resounding track that sets the mood for a pensive night.

Death Cab pick up where PTL left off with a long, instrumental intro leading into “I Will Possess Your Heart,” an eight-minute non-radio hit that dedicated devotees relish in. Followed by Transatlanticism’s, “New Year,” and “Crooked Teeth,” from Plans, Gibbard and his bandmates are smiling and energized, clearly invigorated by the tracks of old. There is palpable chemistry between the stage and the crowd– the band is not just “going through the motions” of playing a set, and the audience is eating it up. Few in the crowd remain in their folding camping chairs, opting instead for a standing, swaying experience.

“I smell a lot of marijuana in the crowd. Things have changed since the last time I was in Salt Lake City,” Gibbard laughs. The energy remains upbeat as Death Cab indulge long-term fans with deeper tracks. In “The Ghosts of Beverly Drive,” Gibbard sings, “I don’t know why, I don’t know why,” as the crowd sings along, followed by “Long Division” from Narrow Stairs.  Death Cab take a moment to plug their new album, Thank You For Today, due for release on Aug. 17 of this year. They play “Gold Rush,” a twinkly track that wistfully describes the gentrification of their neighborhood, Capitol Hill, in Seattle, Washington. Gibbard pleads, “Please don’t change / Stay the same.”

The nostalgia train continues on, full speed ahead with woeful track, “What Sarah Said,” in which the line “Love is watching someone die” hangs forlornly in the air.  Gibbard stands solo on the stage for “Your Heart is an Empty Room,” swathed in pink light, and he sings. Alternating between guitar and piano, Gibbard eases into the latter part of the set with more crowd favorites (“Sound of Settling,” “Soul Meets Body”). He takes a moment to note, “I know this is something people say onstage, but Salt Lake City is of our favorite places to play.” It’s easy to understand why, with a beautiful, mountain-air ambiance and an ultra engaged-crowd.

As another fan treat, Gibbard plays a solo acoustic version of  “I Will Follow You Into The Dark,” perhaps the band’s most beloved track of all—a love story that ends morbidly. If Death Cab has a trademark, it’s interpreting loss in a universal way. Even as the band approaches middle age, they continue to meditate on the melancholy.

In the final song of the evening, “I Dreamt We Spoke Again,” we hear an ethereal, remorseful introspection, giving an intriguing glimpse into the upcoming album—and the rest of Death Cab’s career, which isn’t ready to fade to black just yet.