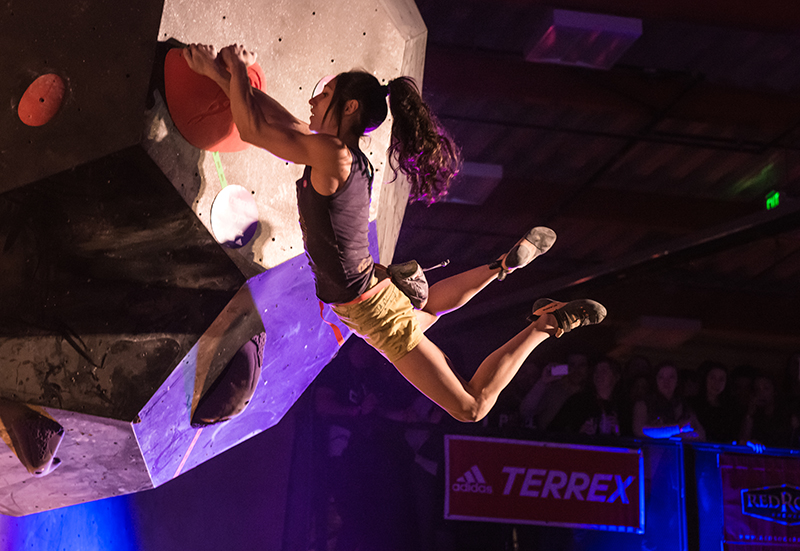 It was no surprise to the SLC crowd when Alex Puccio stuck this difficult move. Photo: ColtonMarsalaPhotography.com

Each year during Outdoor Retailers, Salt Lake City’s biggest convention, The Front Climbing Club hosts the bouldering competition Di’namik. This type of competition consists of short and powerful 20- to 25-foot climbing problems. After four previous years of experience, the fifth annual competition drew large crowds from the Utah climbing community, especially in the newly remodeled gym with its 35,000 open square feet of walls. A major appeal for this competition is its open-citizens format, where anybody and everybody could compete alongside some of the world’s best climbers.

The atmosphere was brought to life by the gracious food donations from Lucky Slice Pizza and Komrades, along with the delicious concoctions of Beehive Distillery, Mamachari Kombucha and Red Rock Brewing. As people enjoyed their brews and pizza, they were entranced by the combination of the vibrant light show and DJ beats. With cheers of excitement, the crowd was introduced to the 12 final climbers to compete that evening. With a short preview of the problems, the climbers were given a limited amount of time to strategize their moves before the actual competition.

Di’namik consists of three different climbs for each group, allotting four minutes for the climber to attempt to reach the final hold. For those that can reach the top in the first try, a term called “flashing a problem,” more points are awarded to honor this feat. Starting from the lowest scoring qualifier, male and female climbers attempted their problems side by side during the short race against the clock. The first men’s problem consisted of a huge dynamic move, necessitating a tight grip on the wall during a swing. In the third women’s problem, 14-year-old Sami Singleton landed the move of the evening; using her strength, she launched herself into the air, grabbing hold of two pinches and gripping tight while her legs swung from the momentum. Mind-blown, I dropped my camera and I began cheering for her. The uplifting competition showed off the talent and fitness of each individual, causing wild roars of excitement from the crowd.

After the final round, there was a pause before they announced the winners to raffle the wonderful gifts provided by sponsors like Petzl and Adidas. The podiums were set in place as the victors were announced to the waiting crowd. In the women’s competition, Alex Puccio, one of the best climbers in the world, took the trophy for first, while Matt Fultz, a previous Psicobloc winner, took the men’s victory, each taking home $2,000. As people funneled out of the building, next year’s Di’namik bouldering competition was already on everybody’s minds as they anticipated the bigger and better climbers in this ever-growing community.