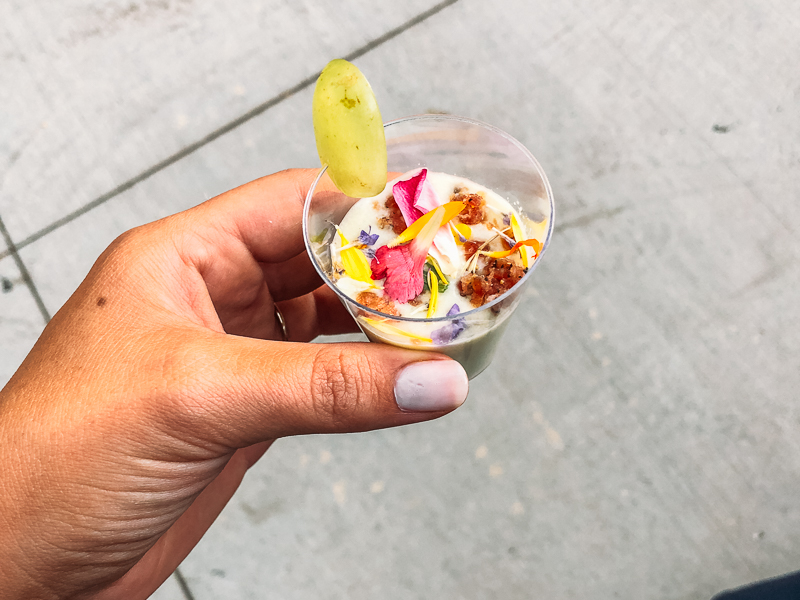 In his breakout book Kitchen Confidential, the late chef, writer and world traveller Anthony Bourdain wrote, “Eat without fear, tearing into the local stew, the humble taqueria’s mystery meat, the sincerely offered gift of a lightly grilled fish head. I know what I want. I want it all. I want to try everything once.” Having fasted all day in preparation and with this mindset, I attended Eat Drink SLC at Tracy Aviary, a culinary event wherein restaurants, food trucks, beverage makers, wineries and more gather to show off their best stuff to Salt Lake City’s hungriest and thirstiest foodies.

Attendees could wander the handsomely landscaped grounds while various exotic birds were freely exploring or escorted by handlers. Booths were setup, spread throughout the aviary, shielded from the hot July sun by the tall trees surrounding Liberty Park, with much of the food being cooked or assembled fresh onsite. The sheer amount of food and drink on hand was too much for any one person to sample or review, so lack of mention here should not imply lack of quality. Everything was wonderful.

Provisions served elegant bite-size everything bagels with duck liver mousse with Utah’s Slide Ridge honey vinegar and coarse salt. It hinted at salty and sweet and the mousse was light and creamy. Pago served what they demurely called compressed melon, which had been sealed in a vacuum bag with local honey and water, giving it extra sweetness, alongside Armenian cucumbers with lemon juice and heirloom cherry tomatoes, basil and burrata, a buffalo milk cheese. It was a fresh-tasting dish perfectly suited to a 96-degree-plus evening.

Copper Common served a cocktail they called the “Lazy Frank,” featuring Waterpocket coffee rum,  honey, lemon, orgeat and thyme, featuring prominent flavors of molasses and cocoa while remaining light and refreshing. Copper Onion served marinated Persian cucumbers with sesame lavash, house labneh, Aleppo pepper, mandarin and herbs, which offered a wide spectrum of flavors and textures in each bite. As I was finishing this a Tracy Aviary handler walked by with a milky eagle owl, native to Africa, on her arm, which peered at the crowds through marble-black eyes.

We were ready for the first of our many desserts, and Stanza was serving gorgeous mini tartlets with either pomegranate, caramel and Solstice Madagascar chocolate ganache or crushed pistachio and dried mango. They were also serving shrimp ricardo goat cheese cannelloni with a white wine heirloom tomato sauce, as well as cantaloupe and caramelized watermelon bruschetta with mint chèvre and prosciutto, making their booth a one-stop-shop that would have been a shame to miss.

Terrestoria Wine Imports had a variety of Spanish and Italian wines, imported from lesser-known regions and women-run estates. The wine was excellent, and it was nice to know that winemakers outside the usual regions are getting attention. Beltex Meats were there, serving cured meats I had never heard of including smoked mortadella, bresaola and blood sausage, along with pickled radish as well as the salami they serve in their Cuban sandwiches on Saturdays. The Bird Feeder Café was serving adorable mini quiche, one with Beehive Barely Buzzed cheese along with hickory smoked bacon that exhibited a deeply savory flavor, and the other with smoked wild salmon with port salut, a cheese from Pays de la Loire, France, that was very mild and soft on the palate overall.

Round two for dessert was a fruit tart from 3 Cups with dragonfruit, papaya, mango, raspberry and a vegan cream filling. They also had three flavors of sorbet on hand serving generous portions, including lemon basil with marzipan. One standout was the Greek salad served by Eva, which was so tasty I ate more than one should when so many other things are available. Fire and Slice Wood Fired Pizza was baking in their portable brick oven. Their pizza was lovely, though their oven-baked herbed goat cheese on flatbread was heavenly. Rico Cocino y Tequila Bar served enchiladas paired with souza sauce and pineapple, which was a revelation.

Park City Culinary Institute provided me with my first (intentionally) cold soup experience, serving Ajo Blanco, a Spanish soup with almonds, garlic and vinegar, garnished with a single grape. The Dispensary knocked it out of the park with taro-chip nachos topped with organic coconut oil, pickled carrots, rice wine vinegar, jack fruit, coconut milk, soy sauce, lemongrass, garlic, vegetable stock, edzucki beans and green onion. They were different from the nachos at the ballpark, to say the least.

Cafe Trio served melt-in-your-mouth smoked tuna and cute little almond flour pastries. Bambara served chilled duck salad, which they couldn’t help but point out on the description card was being “served in a bird sanctuary.” It wasn’t the only bird served at the event, but the self-aware humor was appreciated.

Normal ice cream was serving strawberry ice cream with chunks of rhubarb and crushed graham cracker. It had that taste of ice cream homemade on the Fourth of July by mom, but if your mom was great at making ice cream—a good, naturally flavored tasty dessert. Our final visit for the evening was to the crowded booth of San Diablo Artisan Churros, which show what a farce most “churros” are. Freshly fried and powdered, these would be good on their own, but they offer unique fillings such as dulce de leche, coconut cream, piña colada and even strawberry lemonade.

As always, the event did not disappoint. Utah’s food scene is great and getting better all the time, and after this event, that many more people know it. –Tyson Call