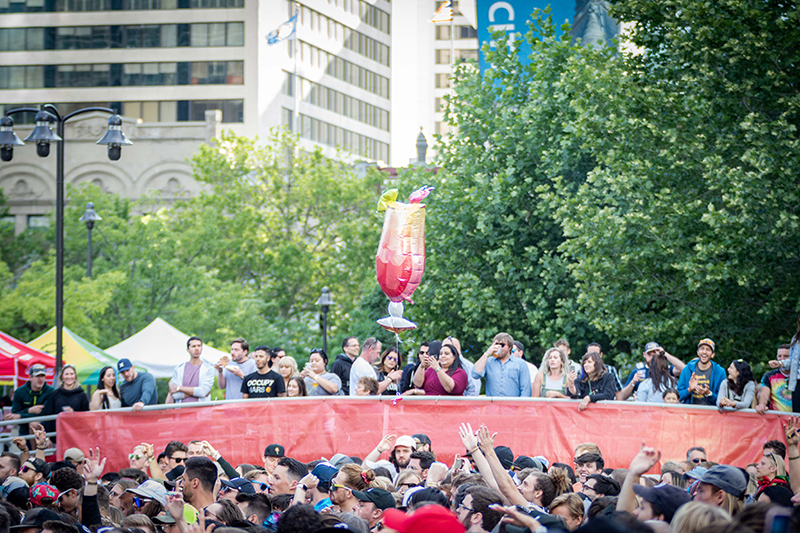 Just a day after midsummer, a crowd gathered in the heart of town for an intimate concert extravaganza at the Gallivan Plaza. This Saturday was an especially busy one in SLC, with the annual Utah Arts Fest and other shows at The Complex and Club Sky. For the Salt City Sounds 2019 Concert Series, ford., Elley Duhé, Whethan, Big Wild and Empire of the Sun were set to play under the afternoon sun. The day started with a cool, nippy morning and a biting chilly wind, but by the time the venue opened for the day, the sun was shining and it was beginning to warm up. The plaza was fenced in with a VIP section in the balcony area and a 21+ area where the ice rink typically is during the winter months. Gates opened early with a 3:00 start, at which time people wandered in and lounged across the green space filled with perfect resting spots and places to watch the stage.

The music began with local talent ford. He opened up the series with some funky beats. Next up, Elley Duhé. Her music sounds like a mix of electronic with indie-pop vocals. She played her hits like “Immortal” and “Tie Me Down.” Having collaborated with Zedd, Duhé is a rising star with a class act of smiles and energy. As the day grew long, the crowds began to fill the venue and Whethan, an American DJ and producer from Chicago, rocked it with some big bangers like “Savage ft. Flux Pavilion.” The intensity at the event definitely stepped up a notch with his set.

Easily one of the main stars of the series, Big Wild rocked the plaza with a show-stopping performance of his new album, Superdream. Playing everything from classics to new tracks, Big Wild rocked out with songs like “Pale Blue Dot,” “6’s to 9’s *feat. Rationale),” “Heaven” and “After Gold.” He played a variety of instruments, including the percussion instrument cajón. His vocals were such a stunning part of the show, choosing to mix beats with live singing. For the final act, Empire of the Sun danced on stage with bright costumery and face paint. Dancers in nude spandex bodysuits graced the stage as Luke Steele and Nick Littlemore played their take on dream pop. The sun dropped down below the buildings as the creative and electric performance was exploding.