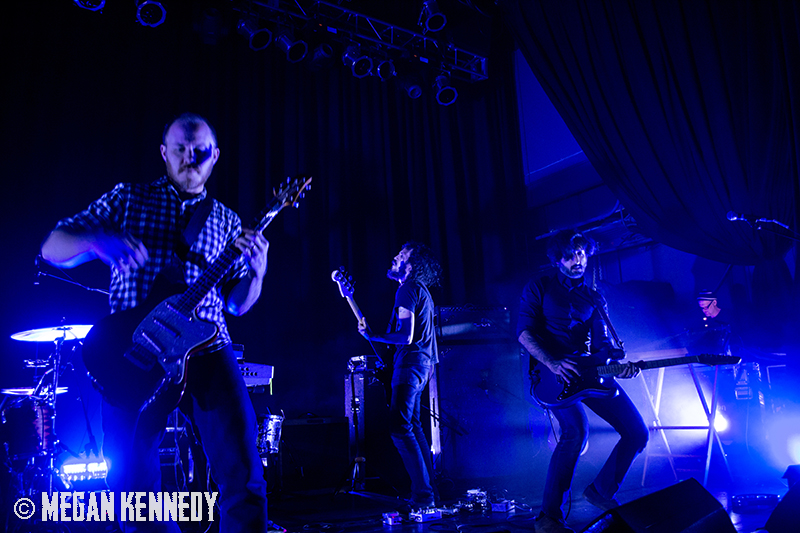 Explosions in the Sky, Disappears @ The Depot 05.09

Instrumental post-rock gods Explosions in the Sky returned to Salt Lake City on Monday night, touring in support of their highly anticipated new album, The Wilderness. Playing at The Depot was a good call: The venue has the sound and light capability to pull out all of the emotion for a show like EITS’, and it did not disappoint. At the band’s insistence, the show was all-ages, which made for an interesting mix of a crowd and the rare chance for the underage kids to get out to a show—the nearly sold-out crowd was full of them. (Also, it is jarring to go from a Behemoth crowd to an EITS crowd.)

The night opened up with the high-energy, unique post-rock stylings of Disappears, a four-piece act from Chicago. The venue had a sizable crowd by the time Disappears went on, and they got a great reception. They had an interesting mix of sounds, including a little shoegaze in their vocal mixing (which may or may not be replicated on the album). Compared to the melodies of Explosions, this band’s melodies were almost unsettling, discordant, stirring in a different sort of emotional way that makes you want to get up and move. Their drummer was impressive as hell and a blast to watch, showing off an energy that doesn’t always seem present in acts like this. They mentioned that this was their first visit to Salt Lake; hopefully, their impression of us was as awesome as was our impression of them.

Explosions in the Sky came out to a screaming, eager crowd, and their own special light setup included a string of moving bar lights on the front of the stage, creating, at times, an ethereal wall of light and smoke. I’ve listened to this band for a long damn time, but I have never seen them live, and I was not disappointed. Despite not having the typical focal point of a live show in a vocalist, the band managed to make the show visually appealing from start to finish simply by getting into their own rhythm and sound. There was an odd feeling, like we were snooping in on the band’s private practice, not watching them perform—something about the way they rolled onstage makes me wonder if they realized the audience was there at all. They were so relaxed, an extension of their music. They ran through new songs from The Wilderness and pulled out old favorites to delight, including “Your Hand In Mine” and closing out the night with “The Only Moment We Were Alone.” It was a magical fucking evening.