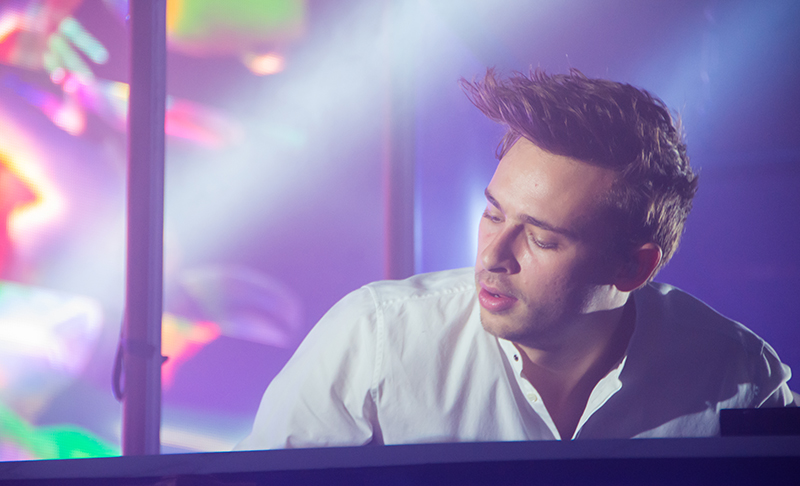 Twenty-four year-old Harley Streten, most commonly known as Flume, made his first appearance in the Beehive State on Tuesday night at The Complex in Salt Lake City. Flume is known for his high-energy atmospheric dance music, inspired by house and U.K. garage–styled beats. His debut self-titled album features tracks such as “Sleepless ( feat. Jezzabell Doran),” “Holdin’ On” and “Left Alone (feat. Chet Faker),” offering a first look into his unique style as a musician and producer. Having peaked at the top of the Australian ARIA Albums Chart in 2012, Flume’s popularity has continued to grow, and he has become a familiar face, playing at bigger venues and festivals. Recently, Flume has worked with well-known artists such as Disclosure, Arcade Fire and Lorde. Those at The Complex got a taste of Flume’s new stage design, a cubical version of his previous infinity prism design, on Aug. 16, creating a vibrant show to remember.

The sold-out show opened with raucous performances by special guests Hwls and Classixx. Hwls, an artist hailing from Perth, Australia, kicked off the show with his electronic house music. The club continued to fill through both Hwls’ and Classixx’s sets. Classixx, a group consisting of childhood friends from Los Angeles, played tracks from their 2013 album Hanging Gardens and this year’s Faraway Reach. The energy built throughout the night, climaxing with Flume’s introduction as he began the night with his new song, “Helix.”

Flume’s set lasted about an hour and a half and featured the previously mentioned songs as well as more well-known hits like his remix of “HyperParadise.” A version of RL Grimes and What So Not‘s “Tell Me” was a particular crowd favorite, evoking excitement and energy from fans. Flume’s good nature was especially noticeable, and he smiled as he produced his beats. The Salt Lake City fans welcomed Flume’s good vibes and unique approach to his music, which resonated throughout his first performance in Utah. Hopefully, this is an artist that returns to SLC in years to come.