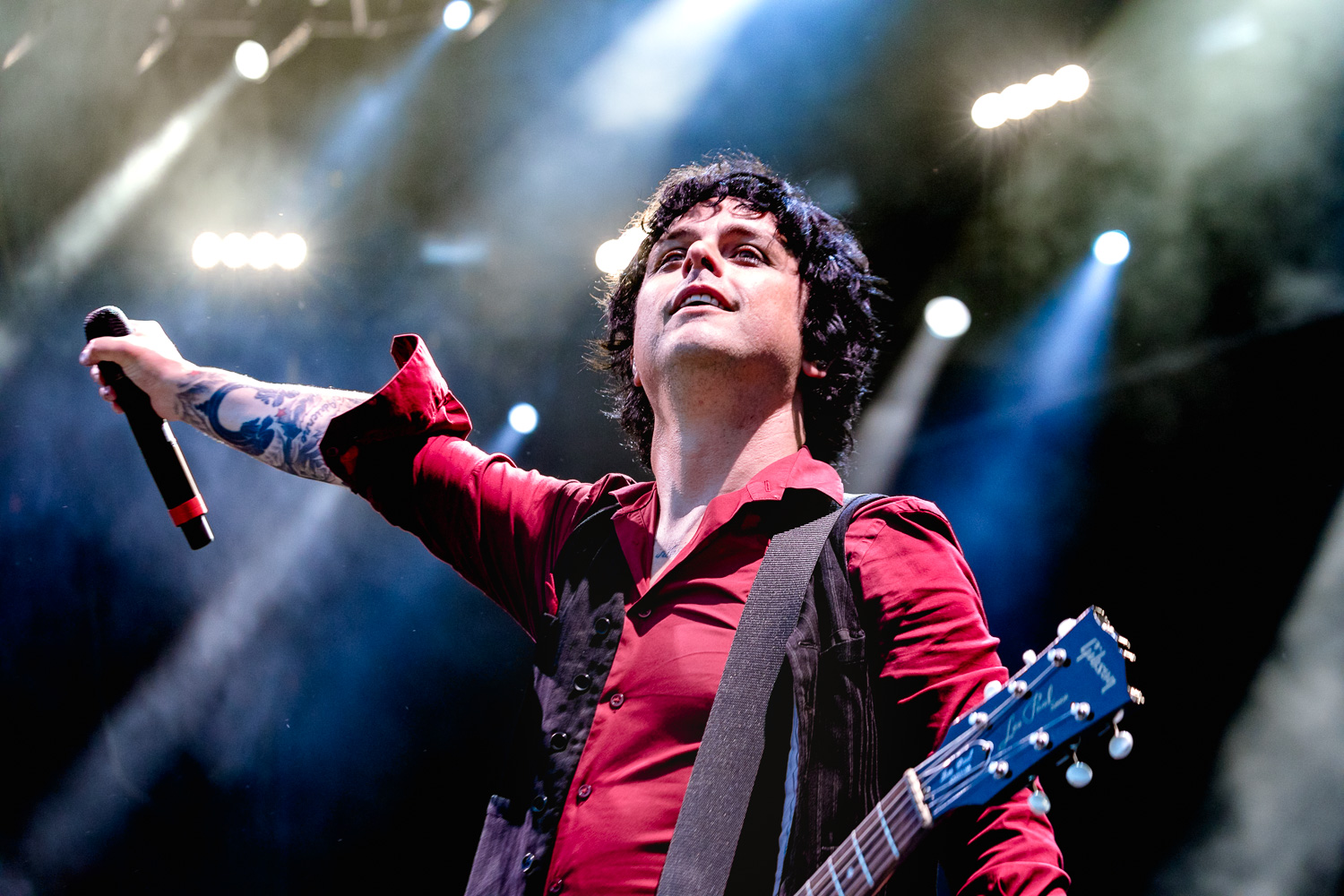 Gesturing that the left side of the crowd needs to be louder. Photo: Lmsorenson.net

Hoards of fans made their way from the dirt lots that surround the USANA Amphitheatre and packed into the venue. Grabbing a slice of pizza, some nachos or a beverage from the selection of Coors Light or a Redds Ale, people mull around the grounds, conversing with each other in the festival-like atmosphere. Excited fans of all ages are scattered throughout the whole venue, and kids, couples, families and fans since the 1990s abound. Countless 21st Century Breakdown, American Idiot and the newest Revolution Radio T-shirts were displayed on just about every body in the area. At the stage, everyone was on their feet, leaning forward in anticipation for the band to take the stage. As the crowd finished singing the lyrics to the Queen‘s “Bohemian Rhapsody,” a giant bunny was released onstage. It’s no ordinary bunny, as it dances for the crowd and proceeds to mime delivering stuffed baby bunnies from a red X on its ass and throwing them to the lucky crowd members. After a few bunny gifts, a wrangler dashes out onstage to take him away, and the music is about to start.

Billie Joe Armstrong and Tré Cool rus to the stage, with Cool heading right to the drums and Armstrong across stage to grab his guitar. Mike Dirnt with bass in hand heads to the front of house and greets everyone that is screaming back at the stage. Green Day have the crowd in the palm of their hands, and they don’t waste time with the familiar hard drum open and guitar riffs to follow. Armstong gestures to the crowds as he sings “Know Your Enemy.” Pumping fists right back at the rockers, teens to senior citizens are immediately losing their minds as they are treated to some of their favorite music as well as the onstage antics and even pyrotechnics from the genre-defining rock band.
At one point in the show, Billie Joe Armstrong gestures to security that he is inviting a fan up to the stage. A lucky hopeful raises his hand and is plucked out of the crowd and thrown up next to his rock icon and a warm embrace. Given the mic and allowed to temporarily provide vocals for the masses, this fan is already having the time of his life. Armstrong takes the mic from the youngster and gestures to him that he should jump into the crowd. With a quick word of encouragement and a shout of lyrics from Armstrong, the kid is off, flying over the barricade and into the crowd’s energetic hands. People lucky enough to make their way to USANA were definitely rewarded with some great music and a great show.