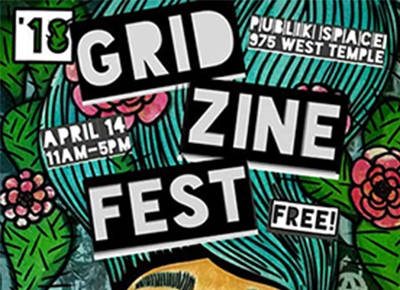 This free event offered kid-friendly tables, a make-a-zine table and a ‘Shy Guy’ table for zinesters who preferred to publish anonymously. Silver Moon Taqueria served tacos from a truck parked just north of Publik Coffee, and baristas hand poured one cup after another to fuel the festival. The event space at Publik featured a bare-brick décor that reinforced the zine gallery’s DIY aesthetic. Saddle staplers and buttons machines peppered the tables as exhibitors continued to manufacture messages throughout the afternoon.

“We formed Grid Zine Fest to create a zine and comix-centric space in Salt Lake, and for folks to come together and showcase their work. Making zines can sometimes be isolating, or it can be hard to find an audience, but we hope that GZF is able to create a space for that to happen,” Juli Huddleston said. After tabling at fests in other states, Huddleston wanted to start something similar in her hometown. “I’ve been making zines since I was in high school, mostly about water parks and train trips, and I love to table at zine fests across the country. It is a great way to meet new folks, and learn from them, and to see the world in a different way,” she said.

Bonnie Cooper’s love for zines led her to team up with Huddleston when they founded Grid Zine Fest in 2017. “I’m working at the downtown Salt Lake City Public Library on Level 2 where their zine collection is located. I was instantly drawn to zines because I had been unwittingly making my own zine like mini comics, essays and collages since high school without realizing they fit into an actual genre. It was so exciting to see that kind of creativity appreciated and celebrated  by a community, and I’m still constantly inspired by all of the creators who are making their own unique zines. While I still love to create my own zines I’ve spent most of my time in the last few years teaching zine making to kids and teens in after-school classes and summer camp workshop,” Cooper said.

Sarah Morton Taggart’s comics feature ghost towns and her personal history. “I’ve been drawing comics for almost 10 years, and it’s such a rare delight to be able to share them with people. This year I was able to spend more time going around to the other tables and getting to know other zinesters a little better. I’m still buzzing with inspiration. I think it’s so important for people to be have a forum to present their unique point of view in a way that is much more nuanced than sharing opinions through social media,” she said.

Molly Barnewitz earned an MA from the University of Utah in part through her work examining how LGBTQ+ stories can be told between the pages of comics with a freedom that isn’t available in literature or art. “I studied LGBTQ+ representation in comics during my MA program at the U of U. I also have some friends who make their own zines and comics, which I have always admired.  After I graduated, I wanted to be involved with something more creative rather than analytical,” Barnewitz said.

Grid Zine Fest established a set of safe space criteria to allow participants to enjoy the event regardless of “race, ethnicity, gender, sex, socio-economic status, education, religion, immigration status, language and cultural backgrounds, physical and mental health.” This led to an inclusive atmosphere in which diversity flourished and creativity blossomed.

Sponsors included the Utah Arts Alliance and SLUG Magazine. There’s contact information for the exhibitors and organizers at the Grid Zine Fest website.