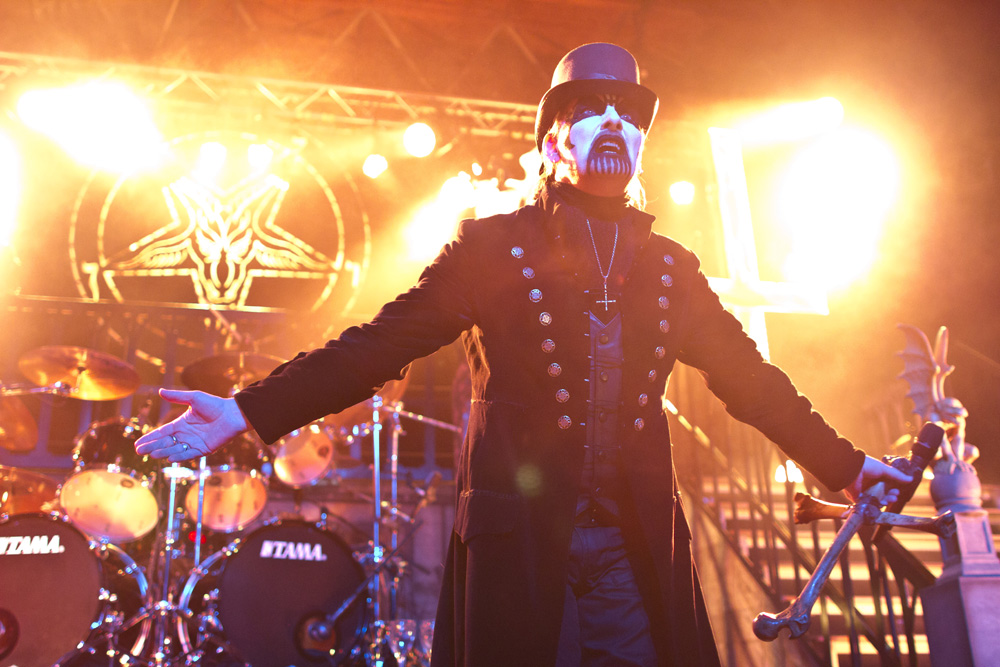 King Diamond on Halloween, Not Just a Dream

King Diamond performing at the Complex on October 31 made for an unforgettable Halloween. Exodus took the stage guns blazing and their unfaltering amounts of energy infected the audience. Steve “Zetro” Souza demanded multiple mosh pits and toward the end of Exodus’ performance, the pit was the largest I had ever seen. Not only that it was probably the most comical mosh pit with a giant banana slamming in to other costumed bodies and a wall of death. Exodus sounded great save for the Complex’s usual kick drum-heavy sound mix washing out some of the guitars. The band had the crowd in a frenzy and heightened the anticipation for King Diamond.

King rolled Grandma on-stage in her wheelchair as “Out From the Asylum” erupted from the speakers. For a brief moment I expected a show similar to that of King Diamond’s last Salt Lake City stop in October 2014, but I was quickly proven wrong. The stage setup was the same save for the gates that were present at the beginning of his 2014 set but he used different theatrics including pulling a doll out of Abigail’s coffin and a performer acting out the songs as Abigail. They played a different array of songs this time around from the albums Them, The Eye, Fatal Portrait and even some Mercyful Fate covers. King Diamond performed “Halloween” as well as Abigail in its entirety. His falsetto sounded a little tired, but his performance was nonetheless spectacular. Crowd surfers were abundant, partial thanks to Santa catapulting people onto the heads and necks of those around. There were fewer costumes than I had expected, but I saw King Diamond’s face paint nearly everywhere. I do not know how Salt Lake City lucked out on hosting King Diamond on Halloween, but it was the best Halloween I have had.