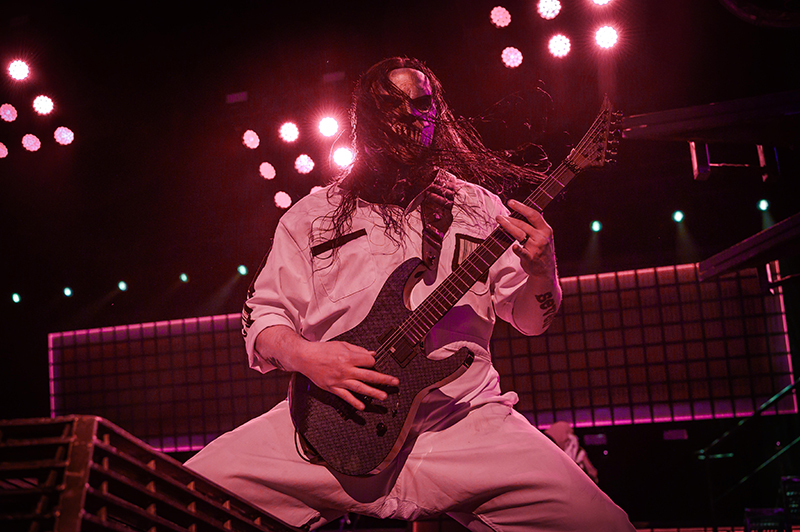 It was the standard hot Thursday afternoon in Utah as I arrived at USANA Amphitheatre for the Knotfest Roadshow. With $11 beers and $13 tacos, I filled my belly as I waited with excitement for the festivities. It had been a couple years since I had last been at USANA, and I had forgotten about the venue’s beautiful view of the Wasatch range. As fans arrived mostly wearing all black with skater shoes, the young and the old were ready to relieve some stress with their favorite heavy metal bands.

As a concert photographer, I had seen images of Behemoth performances and was absolutely stoked for their set. They opened the show at 5:30 as the summer sun beat down on USANA, but it didn’t stop people from showing up early to catch their set. It consisted of white-and-black face paint, smoke cannons, pyro and, of course, dark heavy metal riffs. Their 45 minutes were pure entertainment; a whirlwind experience that went by too fast.

As they set up the stage for the next heavy metal hitter, people hustled to grab another $11 beer or a venue snack. With a rapidly filling arena, the energy continued to build, and then the French heavy metal band Gojira stepped onto the stage. Brothers Joe and Mario Duplantier began hitting playing deep guitar strums. With sweat dripping from their faces, they gave Salt Lake City a 110 percent show.

Volbeat was the last performer before Slipknot took the stage. Volbeat’s set consisted of a mixture of heavy metal and country vibes. It was my first time listening to the band, and I definitely left a fan. The Knotfest Roadshow crowd especially became excited when they played their 2019 hit “Under the Sun.” Their European metal-rock hybrid was unique and entertaining to watch.

Once Volbeat left the stage, a large black curtain was dropped from the top as the stage crew began setting things up for the main act—Slipknot. People began filling in the large venue, hustling to from the restroom and the concessions. Once the crowd was settled, the large black curtain covering the stage glowed with the blood-red Slipknot logo. The crowd erupted with hoots and hollers. The stagehands dropped the curtain and the nine-person band began playing those famous Slipknot sounds. With a massive stage set up, the band was divided into three different tiers that made for an amazing spectacle. One of my personal favorite moments from the show was when they played “Before I Forget.” When the night finally came to an end, Slipknot closed with a fan favorite, “Duality.” USANA absolutely lost their minds! The Knotfest Roadshow was my first Slipknot show and I would definitely go again.

Slipknot @ USANA 08.21 with Lamb of God, Bullet For My Valentine
Review: Behemoth – I Loved You At Your Darkest