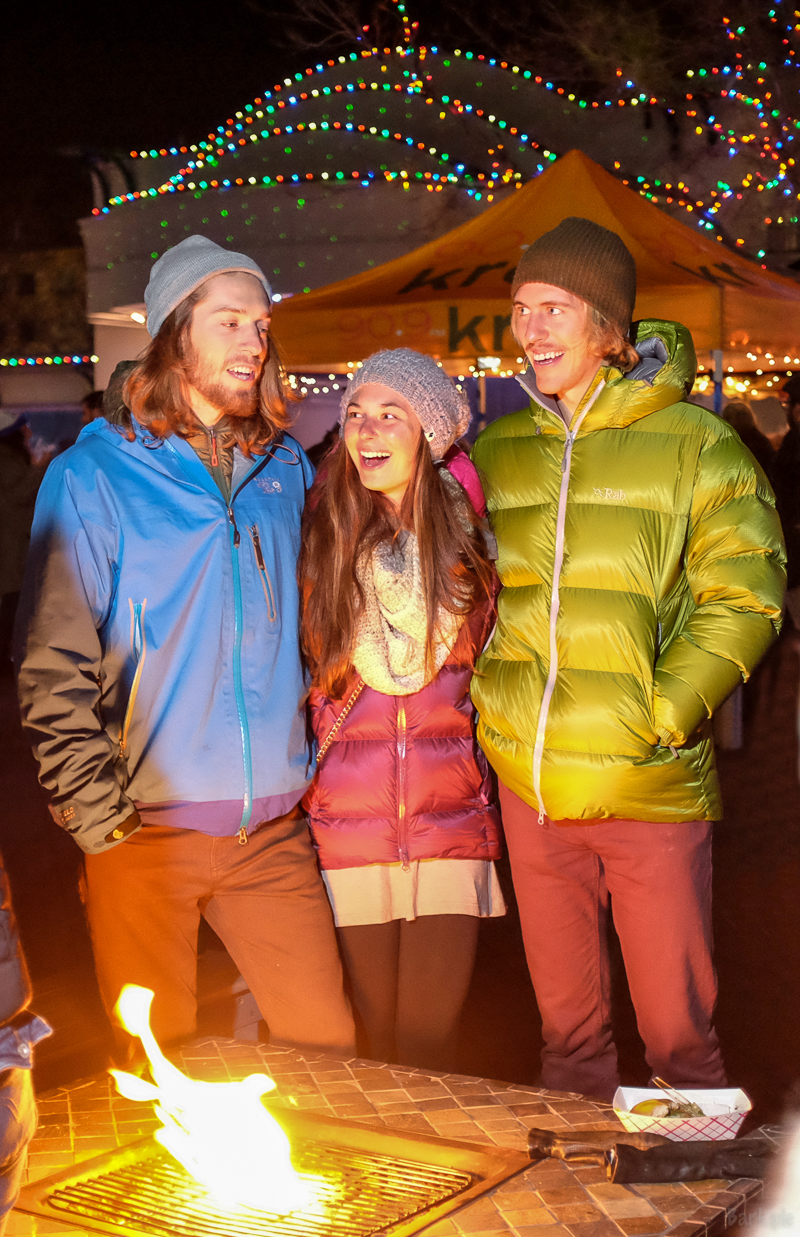 (L-R) Kyle Blase, Jenny Handel and Greg Bebetich heard about KRCL’s 2015 Polar Jubilee on the radio, and they thought they’d check it out. They consider themselves KRCL donors and aficionados. Photo: John Barkiple

For the sixth year in a row, KRCL celebrated its birthday with a polar jubilee. The radio station is 36 years old and still going strong. Hundreds of fans, donors, sustainers, volunteers and KRCL staff bundled up and swarmed the Gallivan Center for an evening of music, food and conversation.

KRCL is crucial to the diversity of Salt Lake’s radio scene, but the station’s reliance on donations puts it in a tricky situation. Donors consistently provide KRCL with the funds it needs to offer eclectic programming throughout the week and provide a metaphorical “town square” in which all manner of Utahns can meet and mingle. And on a magical night like the Polar Jubilee, the metaphor becomes reality as the Gallivan Center fills with public radio supporters of all stripes.

From the Three Pines Coffee booth by the ticket table to the Salt Lake Photo Collective photo booth upstairs above the Gallivan Plaza, KRCL’s 2015 Polar Jubilee offered something for everyone. Hungry guests stood in line for Chow Truck tacos or for Fiore Wood-Fired Pizza and ate dinner standing under heat lamps or seated at communal fire pits. Coordinated guests even strapped on skates and took a few turns around the rink east of KRCL’s fenced event.

On the plaza, tables against a fence created a perimeter filled with activity centered around a giant tree covered in colored lights. On the north end, volunteers from Volunteers for America collected clothing donations for homeless youth. Proper Brewing Company poured pints of their KRCaLe, a collaboration between brewers and KRCL DJs and staff that produced a dark, hoppy ale. Another table offered a selection of wines. On the south end, bands performed on the Gallivan stage.

The upstairs event space at the Gallivan Center gave Polar Jubilee guests a chance to warm up and grab a pint of beer or a glass of wine. Dave Brewer was up there with a prop-filled photo booth experience to celebrate KRCL’s birthday, and PopArt Snacks had a seven-flavor popcorn bar filled with surprises like Thai coconut curry, nori sesame and white cheddar jalapeño.

Three bands kept revelers on their feet as the evening’s chilly air grew colder. Two Nations started at 6:00 p.m. and drew a crowd that swelled as The National Parks took the stage. By the time Fictionist started playing, Samba Fogo was also performing to a warmer crowd upstairs above the plaza.

In the end, loyal KRCL volunteers struck the tables and corralled the fences and called it a night as the moon waited to rise above a festive tree in Salt Lake’s town square.