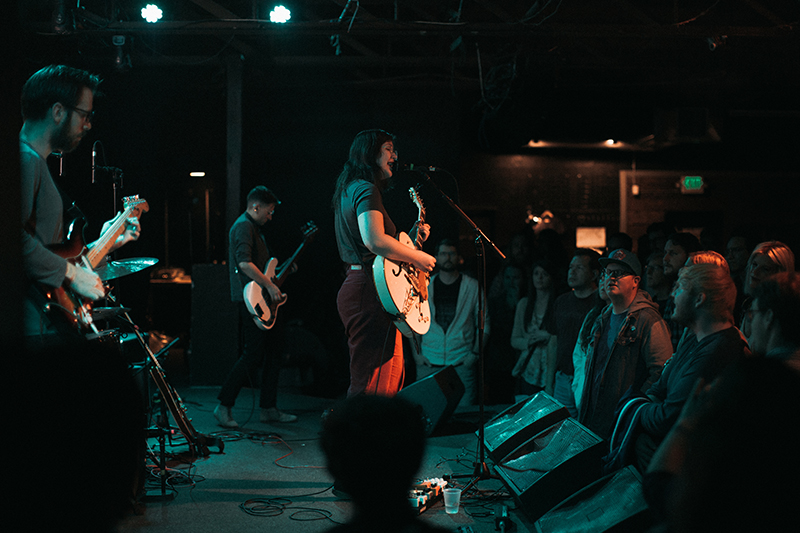 Shortly following the release of her sophomore album Historian early last month, Lucy Dacus launched on a 26 night coast-to-coast tour of the States, selling out 10 of those dates long before doors. Friday night’s show at The Urban Lounge didn’t quite make it to sold out status but it was certainly no small affair, drawing a few hundred of SLC’s most devoted Dacus fans. Lucy opened her set solo and without announcement, bearing just an electric guitar and performing a quiet tune for a silent crowd, but that proved to be one of only two quiet moments for the remainder of night.

Lucy’s effortless vocals were backed by an incredibly tight and talented three piece and supplemented by a choir of fans singing (and often shouting) nearly every heart-wrenching lyric from both her debut album No Burden and the not-even-one-month old Historian—something Lucy herself commented on early in her set. The entire performance was an emotional rollercoaster and brought tears to more than a few sets of eyes (I’m not crying, you’re crying) but the undisputed high point of the evening came during a passionate performance of “Night  Shift,” which had people shouting lyrics through cupped hands and throwing their arms in the air to the screech of heavily distorted guitars and crashing cymbals.

Lucy closed her set with a deeply emotional performance of “Historians,” rounding out what a few people loudly proclaimed to be “the best concert I have ever seen.”

Of course, Lucy and the gang didn’t make it happen all on their own. The night’s openers Adult Mom and And The Kids contributed heavily to the palpable positive energy in the place, attracting an impressive amount of their own fans respectively and even facilitating an engagement early in the night (I’m not crying, you’re crying). Overall, I can’t imagine a better cocktail of music, good vibes, and cheap beer.